League Assignment; When I was a kid

When I was a kid, my favorite show, movie, toy-line...you name it was Ghostbusters.  I can't even describe in any articulate sense how much I loved that franchise.  I remember the first time seeing it on VHS rental from the Electric City Video store down the street.   I even remember the previews on the tape for the other Columbia Pictures releases...Starman, Karate Kid and Passage to India. 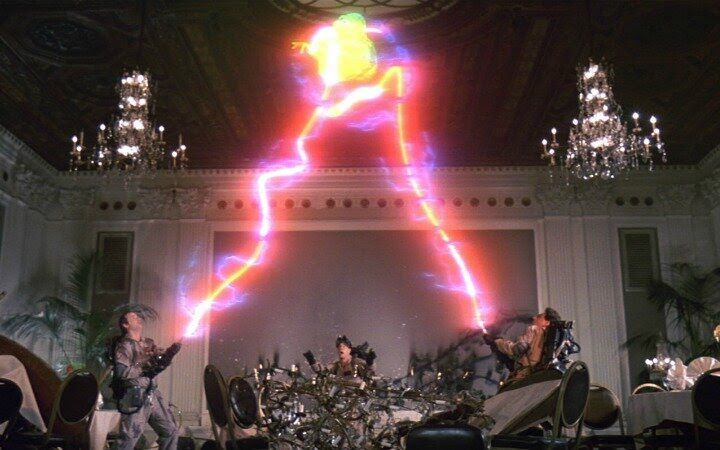 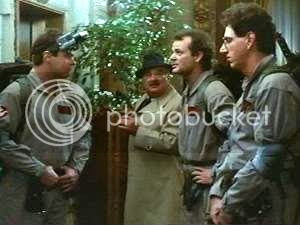 I remember seeing it in two parts on a Saturday afternoon and being so mad when we had to turn it off so I could go to my grandpa's (actually I remember it being the first real movie I remember besides Solar Babies and Flight of the Navigator) I remember being mesmerized with the ghost parts, the librarian, the eggs on the counter, the crumbling rooftop of the Shandor building, Stay-Puft (or was it Stay-Puff?) and all the wonderful touches in the movie like the lights on the proton packs, all the weird sci-fi stuff on top of Ecto-1, the button for the fire-alarm and being absolutely obsessed starting with the first shot of the lions in front of the New York Public Library, my dad and I even made up a spin off story about the guy at the elevator, you know, "what are you, some kind of cosmonaut?"... I could go on and on, I have the whole movie memorized.

Then there was the amazing cartoon series that was actually scary...even thinking back to some of those episodes like Mrs. Robinson's Neighborhood, Don't open until Doomsday, and Ghosts R Us still gives me fond chills.  It had insanely creepy villains like Sandman, Samhain, the Boogieman and Killerwatt that stand only next to Inhumanoids in how balls out scary they were for a children's audience.  I even did a top 10 list of my favorite GB ghosts and toys here! I always went to my cousins on Saturday and would draw the ghosts at her house after seeing that morning's episode.  Voice acting was superb with the likes of Lorenzo Music and Arsenio Hall and although the actor's depictions were that of their own, they really took hold of the characters they were portraying in a very believable manner.  The opening animated title sequence was incredibly memorable and very high quality and set the tone perfectly to the Ray Parker Jr. hit single and the show carries on the well done animation throughout the series. (except the more cartoony kid geared Slimer shorts)

﻿
No good 80's franchise was worth its salt until you weigh it next to the merchandising!  These toys were top notch and quintessential 80's fare.  Kenner was at the absolute top of their game and it showed through their first few waves of this line.  You had spot on depictions of all the major male characters (poor Janine and Slimer never really got show accurate representations...hell even Louis got an eventual proper rendering)  The proton packs with the awesome yet incredibly fragile spinning multicolored proton beams were so cool and I used all of my figures as templates for my drawings I plastered all over my parents' fridge always trying to nail that perfect ghostbusters emblems that were emblazoned on their arms.  These were the drawings that would be what got me into my lifelong love of artwork.  The ghost toys were very innovative in some of the scare gimmicks along with the Ecto-Plasm and the cool pack in ghosts in the little vials and the vehicles especially Ecto-1 and 2 and the firehouse playset are legendarily epic toys that collector cross franchises to appreciate!  The 1:1 scale stuff really invented a new generation of mini cosplayers with the amazing proton-pack, goggles, ghost-trap, neutrino blaster, zapper and popper to name a few.  My aunt made me a custom jumpsuit and I was a Jr. Buster more than once for Halloween...or any other random day around the house.  Beyond the toys were Happy Meal tie-in's, drinking glasses, erasers, pencils, coloring books, sticker books and cereal (obviously) and I was crazy about all of it!

Even the flops in the "Ghostbuster" franchise were little diamonds in the rough  The very first Ghostbuster toys were actually Filmation Ghostbusters...hey, parents were only doing their best as I'm sure many were when they bought those cash-grabs on the toys shelves in 1985.  To their credit, the Buggy and HQ are some of the coolest playsets and vehicles around.
﻿﻿
I also remember the infamously bad Ghostbusters Nintendo game...it was the first video game I ever received before I even got the system to play it on!  I was so excited and so ultimately disappointed when we plugged that piece of garbage in and my father and I struggled to play it all Christmas morning...eh, we exchanged it for the Legend of Zelda and all was rectified nicely. Ghostbusters 2 the game rolled around and that wasn't much better...meanwhile there was an awesome Genesis version of Ghostbusters and a pretty cool top down zap em up style arcade port as well.

Speaking of Ghostbusters 2...I remember seeing that with my cousin Paul and being so blown away...I think it's such an inferior movie in retrospect but it was geared totally toward 7 year old me when it was released...that's the real problem...there was so much more going on in the writing and concept beyond the great effects in the first one and it's like they knew they couldn't top it and just aimed it at the kiddie audience with goofier jokes, ridiculous ghosts and the even-then played out underdog genre....even the classic and super-memorable moody Elmer Bernstein music is replaced with like the Bobbie Brown Ghostbusters Rap and like this overly happy crap by Randy Edelman.   It kinda really is a movie that is truly heralding the end of the 80's and the beginning of the "yo yo yo" 90's.  I do have to say it absolutely blew my mind when the Busters were driving the Statue of Liberty with the NES Advantage, props to Nintendo.

Just recently I thought to myself...so, wouldn't like the whole world be completely different if the events that transpired in the first movie were real?  Like these guys single-handedly confirmed life after death, the metaphysical world of the supernatural and proved a nuclear proton ionization beam could be harnessed and utilized...you think the world would have like a "First contact" moment or at least the busters would make a shit-zillion dollars selling their patent to the U.S. military or something!? Instead everyone is like..."bah...go to hell, ghostbusters! We hate you!" and then, for no real reason all like them again after their trial when they managed to black out the entire city...sure hope nobody was murdered or robbed during that black out...nah, that never happens in 80's New York.   Eh...as you can see, even in my adulthood, nary a week goes by where Ghostbusters aren't on the brain.


Rich at Fortune and Glory Days takes us on a walk around the block in his childhood memories!

Brain of Cool and Collected looks on my favorite soldiers.

Pop Rewind likes his cartoon characters all in one half hour special.