So I recently started replaying Half-Life 2 and as I was progressing through the beginnings of the game, I made quite a realization.  That being, I enjoyed the introduction of that game just as much if not more than the entire trilogy.   Why might this be?  The powerlessness you feel throughout this section of the game. 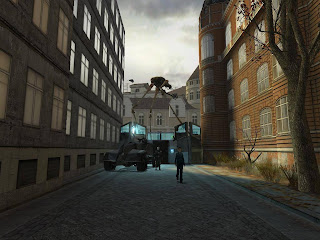 Half-Life is an unquestioned masterpiece.  Why this adventure shines has to do greatly with parts like the beginning.  The story development is masterfully well at interweaving it as you progress.  If you have to stop, it is because a character needs to do something in real-time.  You simply aren’t frozen in time.  You’re waiting around because Gordon would have to wait around in that situation.  (looking at a schematic, getting an explanation, meeting a new contact)  Now I spoke of powerlessness.   You wake up, immediately connected to the G-man through his telepathic message, on a train in a strange place.  You are with other people who also are stunned, broken and alone.   You step off the train and the vastness and coldness of the station is immensely prevalent.  You take in the multitude and hostility of the combine troopers, the loudness and echo of Breen’s voice, the hopeless postures of the citizens, the trash strewn about.  All of these factors set a masterful mood. 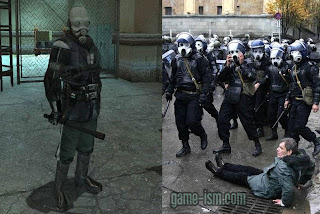 One thing you notice is that you have literally nothing.  No crowbar.  No pistol.  No nothing.   This is a great difference between where you left off in the previous game, being practically a one man army.  The game puts you on a linear path but you don’t feel like the game is forcing you.  Instead there is an already imposing presence forcing you; the combine soldiers.   You damn well better stay on the path or you will face a bash.   You feel the fear of the other internees and it quickly transfers to your persona.  You hear of missing family members, utter confusion, fears of drugged water that “makes you forget.”  The game wonderfully stages scripted dialogue and moments that don’t feel that way at all.  Everything you see and hear feels like it was already happening in this world before you got there.  What is this place you stepped into?   Is this Earth?  If so, what had happened here? 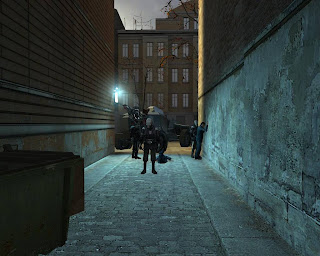 After being herded like an animal among your other fellow internees through the registration check points, you ultimately find your way outside to come across a robot immediately photographing you and see a bleak scene resembling the look of something reminiscent of East Berlin.  Military checkpoints, a lifeless and sterile town square, people milling about in their monochrome prison-like uniforms all as a giant, imposing tower looms in the distance.   As you travel, you see the scenes of people being beaten, rounded up, and taken into custody.  You wonder, “If you are already in some type of custody, where are these people being taken? What could such a broken people have done?  Who are these oppressors?  Are they human?”

You take in the utter presence of the vehicles, get glimpses of the long legged military creatures lumbering about which look straight from the mind of H. G. Wells and soldiers inside some buildings questioning and harassing residents, you included.  After a few moments you stumble into one of the nondescript tenements and make your way upstairs.  You see troopers bashing on doors and muffled yells and cries for help inside rooms out of your view.  More broken residents are inside the rooms you traverse.  You find a crying woman, people peering from the windows at police vehicles outside, as sirens and helicopters buzz in the distance. 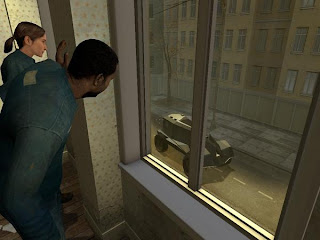 Suddenly, the raids you have been seeing are directed at the rooms you are in.  They are coming.  For whom?  For what?  You are raced from room to room from this impeding force.  They are here and they are everywhere.   You don’t even get a chance to take in what is happening to the people behind you that are desperately aiding you while fleeing.  You make your way scrambling from room to room, climbing stairs, jumping rooftops.  You glance to the street below to see more vehicles coming, soldiers firing up at you.  This all culminates in a maniacal awareness of them closing in.  You are done.  They have you.  Or do they?
These moments are probably some of the best demonstrations of narrative in a game.  You really feel a sensation of panic.  I have played this game countless times and I still get a rush every time.  The folks at Valve replicate this feeling through this whole franchise but I feel they do it best right here.  A great deal is due to your lack of any resources including the sense of knowing what is going on.   You are simply running for your life.  I think a game game like is truly a hallmark of masterful presentation that isn’t done nearly enough in other games in this genre.  We are so used to being unnatural models of machismo fantasy; being able to smash, kill and eviscerate anything that gets in our path with a few well places grenade rounds or laser blasts.  This is certainly not the case at this point in the game.  Granted, you get to do these things later in Half-Life 2 but here, no such luck.   Your own adrenaline and terror is all you have to fuel you.  Nothing is safe, No place is safe, and you are rapidly running out of even unsafe places to escape to.  A game such as Limbo does this.  Call of Cthulhu’s motel scene does this.  (Even the beginning of Resident Evil 4 or Left 4 Dead on increased difficulty can do this too. Although you are armed in those titles, you are so hopelessly outnumbered even your weapons can seem powerless)  We are so used to the very opposite of this.  In so many forms of media such as films, the threat of the protagonist’s death seems so far from happening, the dramatic effects of endangering the hero fall short because we never really think this practically invincible character will ever succumb to harm. 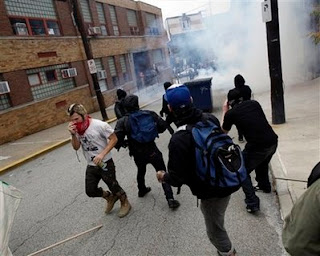 Think of the movie “Children of Men” where the hero is put in so many dangerous situations and never gets his hands on a weapon.  This movie is possibly the best film version of something depicting the Half-Life state of storytelling.  There are weapons all over the place in the end but he never picks them up.  Why?  Is he stupid or is his personal characteristic just so that it doesn’t even register for him to arm himself.   He could pick up a gun but what difference would it make?  After all, the rebels have them and they are getting massacred by the soldiers.  Also, would it be as effective as a film if he got into a gun battle?   We are glued to those crawling steadie-cam scenes because we are literally taking his perspective dodging bullets and seeing the carnage unfold while staying alive seems nearly impossible.


So, as fun as the one-man wrecking crew concept can be, I think we can truly feel empowered by having nothing to count on but our ability to run like hell. 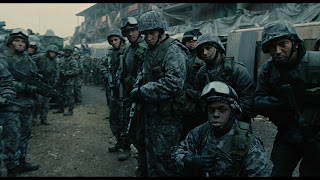