Here's a quickie review of the 2013 Winter Lego Star Wars Collection: A Wing Fighter...
Very nice to see lego paying so much attention to episode VI in these past waves with the Jabba's Palace, Ewok Attack, Endor/Scout Battle Pack, Desert Skiff and Rancor Pit...Wowwie Zowie! Not only do we have some quality sets at relatively decent prices (I just picked up Jabba's Palace off Amazon for 85 bucks priced down from 120, noice!) but we also are seeing some beautifully detailed minifigs!  The A-wing is no exception. 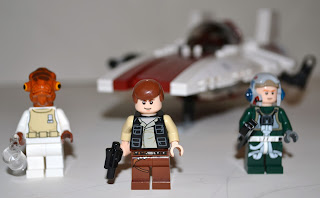 In this set you get a brand new Han Solo Endor General minifigure and A-Wing minifigure...I've noticed in the past few sets that Lego is doing some beautiful work on detailing the legs!  Check out Han's holster and Belt as well as the A-Wing pilot's Harness.  The A-Wing pilot's Helmet is a nice, wonderfully detailed model as well.  Admiral Ackbar is a re-release that you could have previously scored in the Mon-Calamari playset but it's a great opportunity to score one of my favorite rebel leaders.  Accessories are Ackbar/cup - Han/Blaster - A-wing/Wrench...btw, this new pilot mold puts the last version to shame which looked list a cross between an old school Lego Space and Lego City figure from the 80's complete with race car visor.  Oi. 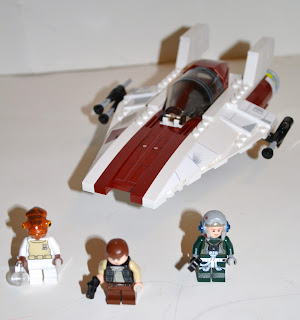 The ship is a nice construction and very simple to build.  It looks very nice and true to the film with great decals that really seal the deal.  The cockpit is tight, it has flick fire missiles, and cool thrusters...the only "action features" it possesses are the missiles, a pop down front landing gear and a flip up cockpit.  It is adorned with the classic rebel red and white and has some nice extra decals on the wings and front sections to make it look beat up and worn.  An extra set of stickers would be good to for customization if you intended to buy a couple of these and at 25 bucks a ship, (20 on some websites) it seems pretty doable but this is a minor complaint. 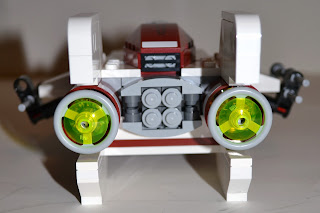 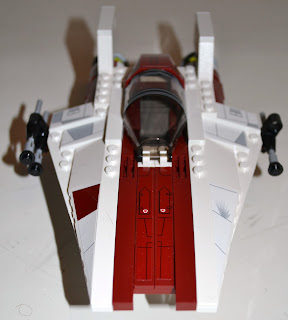 All in all, if you want to pick up another Lego Star Wars set but don't want to shell the exorbitant wad of cash that some of these sets will soak you, Go with the A-Wing, no question.  It's right up there with the Desert Skiff and AT-RT for some affordable sets with cool-as-hell minifigures. 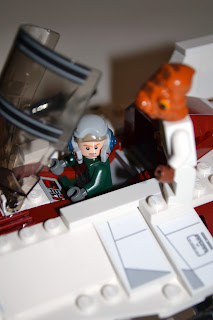