This is one heck of a delayed review...I must admit this was one series that I was incredibly torn about.  When I initially heard about these guys being released (like 2 years ago) I was eagerly awaiting seeing them drop on the pegs, then time passed and I lost interest, then they reared their heads at Comic Con last year and I saw human characters and that they were going to be comic shop, on-line exclusives which completely turned me off to the series and I set my sights on the Takara Beast Saga imports (which I ordered two of and was kinda disappointed in) then I saw that these guys were being released as Toys R Us exclusives minus the humans with two additional beasts with, in my opinion, better paint schemes.  I heard of a January release date and religiously searched the TRU website until one day, BOOM, the series pops up.  I packed Little Luke into the car and we headed off a few weeks back.  I snagged the entire series except for the re-pack of Vorin the Ram who I may buy again just for the new paint scheme and the pretty cool Scorpion bad guy, Scorpus (nice name, not.) 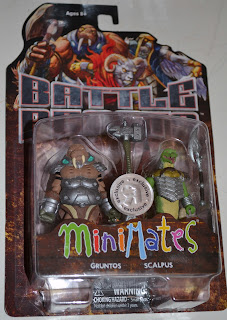 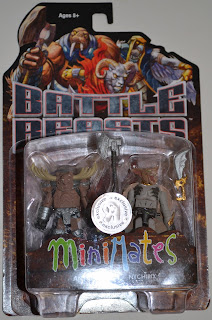 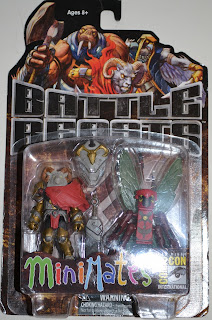 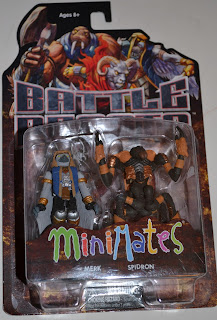 They have your classic Minimates look but one thing you may notice is that these guys really don't look all that much like Minimates.  Art Asylum and Diamond Select did a great job creating some truly innovative unique sculpts to make these guys have very animistic qualities rather than just being straight-up anthropomorphous men painted up like animals. In the bottom left corner you see the Comic Con exclusive, Vorin vs. Zik (the fly, mosquito?)  Each box has the banner of Vorin, Gruntos and Merk (our heroes) in a Battle Stance. On the side of each character on the box is a nice cartoon style head shot of each character in true minimates fashion.


Packaging Out of the Box 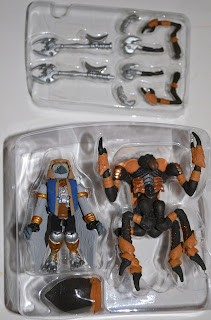 Above is Merk and Spidron.  I'm fuzzy on character origins and the comic that has been released but I know Merk is the good guy and Spidron is the enemy character.  This set by far has the most extra accessories.  Your characters have a mess of holes on them to attatch weapons to their gear and/or bodies... As you can see, Spidron has detachable arms and a read stinger.  Take a look at Merk's legs though...my biggest gripe about the series is one of the nicest touches the made to the characters and that is skinny legs, that have reversed calf portions.  I'm thinking to make them look more animal accurate.  They look really good but they are not that easy to stand beyond one or two poses.  I personally think all minimates should come with nice clear, plastic stands. The weapons are made with painstaking detail and the paint applications are really spectacular.  These photos just can't do the facial detailing justice either. 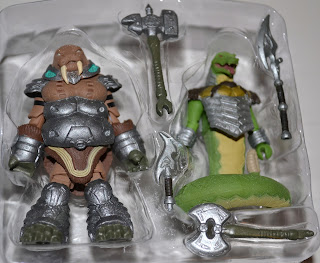 Gruntos and Scalex ...(oops I meant, Scalpus, seriously doesn't "Scalex" sound way better for a snake bad guy???)  are the next guys we'll look at.  Very cook designs and you can see what I mean about detailing a little better since I was able to tighten up on the focus in this shot.  The weapons look really nice and Scalpus especially has weapons that really bring me back to the old Hasbro Battle Beasts.  These both stand really nice and are quite sturdy.  My issue here which doesn't even apply to me is that, as figures, these guys are supposed to have interchangeable parts for combinations and for kids to have fun with their minimates.  These two guys are pretty much as is.  I tried a bit to swap some parts and it's not too doable.  I don't plan on messing with these guys constructions so it doesn't bother me one bit. 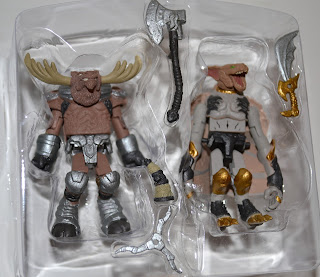 Antalor and Nychirix are my favorites, hand's down.  The photos that were released of these two guys are pretty much what sparked my interest in the series again.   They were late figures beyond Gruntos, Vorin and Merk and their pictures didn't surface until about a year later. The facial detailing is amazing and Nychirix's face is great with an articulated jaw. (nice touch) The only thing that I found a problem with in this set is Nychrix's arms are very still and the first pose I tried to make in extending his wings almost broke his arms which came off really easily.  Antalor has a nice viking axe, a three way boomerang and a tusk horn.   Super cool. 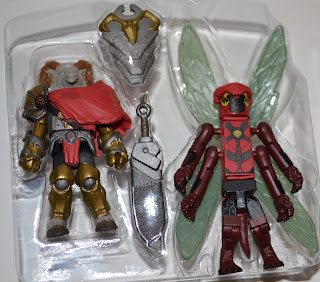 Finally, here is my San Diego Comic Con Exclusive promo set of Vorin the Ram and Zik.  Vorin has had numerous paint variants and styles and this one's main difference is in his cape which is torn and windswept looking...There is also a pretty cool stealth version of him in darker blues, greys and black.  His weapons fit in his hands by far the easiest of all the beasts and the sword comes in a great looking scabbard that attaches to his back.   Zik is my least favorite of the group and doesn't really have much going on.  no weapons, pretty basic Minimate body that the just stretched and added a set of arms to.  His wings are very well made and look truly translucent though. Hats off to Art Asylum's great figures... My buddy is trying to score me an autographed copy of the amazing promo poster by Ulysses Farinas.  Now lets compare these new reinventions to the old Hasbro Battle Beasts.  Granted, these two franchises are supposed to be completely unrelated but any toy collector worth their salt would be hard pressed not to make instant comparisons.  One other thing, the Diamond Select guys even have a more BB feel to them than the Beast Saga revamps...The monochromatic pupil-less eyes say it all. 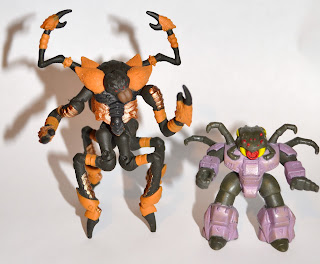 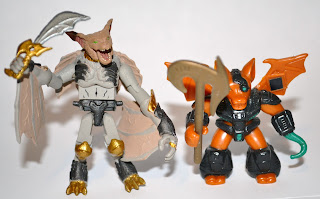 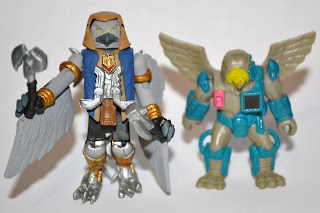 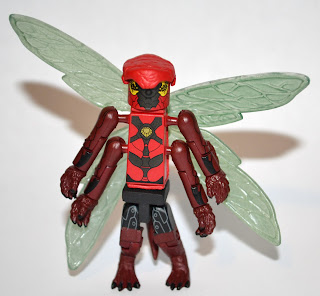 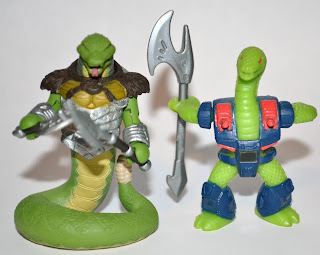 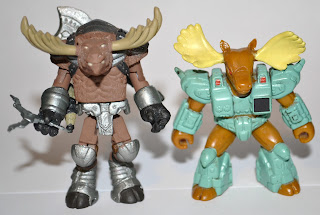 Antalor and Major Moose
Posted by Mr. R at 1:40 PM