I bit the bullet and asked for some KO Transformers for Christmas this year... I weighed my options and after long debate with a fellow collector who also vouched for KO's, I picked out two relatively pricey loose G1s that I've wanted for quite some time, Grimlock and Shockwave.  An original Grimlock goes for about 45 loose without any accessories and Shockwave is an instant 80 bucks even without the targeting reticule, battery cover and rotted cannon cable.   Money isn't particularly an issue but I did this purely for the sole nostalgic experience of actually getting a G1 Transfomer in a box and opening it for Christmas.  If going KO was pretty much the only way to do this, so be it.  I know some collectors absolutely hate these figures and all they stand for but these are for my shelves and I don't plan on reselling them so this doesn't bother me a bit. 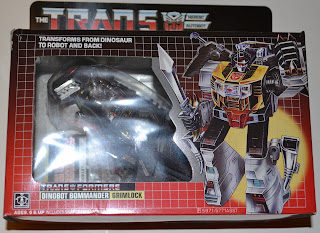 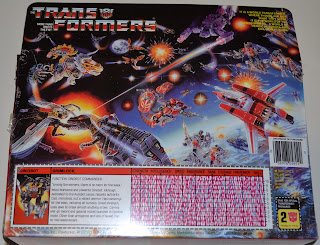 Grimlock's box captures the vintage style pretty well even down to the stat card and points...I love the illustration on the back with the insecticons and Jetfire looking awesome.  (I actually had bedsheets with a very similar picture on this)  This is a major reason why I went with the KO's because of the chance to get this nice box art...let's face it, these two Transformers with their boxes would definitely be soaking you a couple hundred dollars...(as opposed to 100 for the pair) 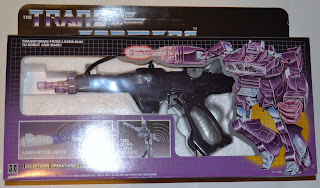 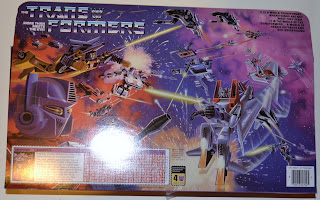 Shockwave's box is pretty cool too although Shockwave isn't in the illustration (guess he's back on Cybertron)...When this came in the mail and I opened it up at my parent's house, my mom and dad instantly recognized this as one of my childhood toys..."Didn't you used to have this?" My dad asked.  "Yes, indeed" 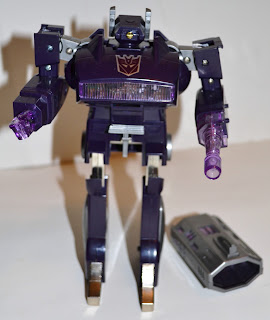 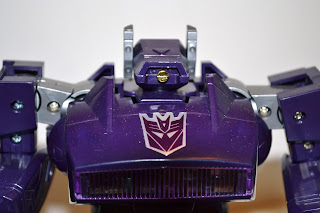 Shockwave was the first of the Zhong Jin repro knockoffs we'll look at.  Overall, great construction, the electronics feature worked well...Shockwave in many respects is an absolute fan favorite so I've wanted to get my hands on any version I could. Shockwave was one of the original Transformers I had as a very young child and lost in the shuffle between High School and College.  His transformation works very well, although a bit "too" tight...I had to use pliers to get his feet and legs to move but too tight a transformation can never be a bad thing.  Or can it?  The plastic is well made, paint is spot on and he stands really sturdy. 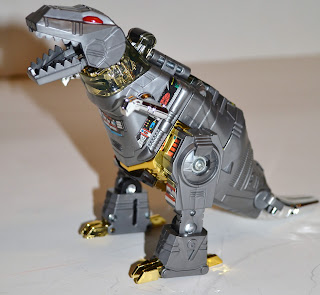 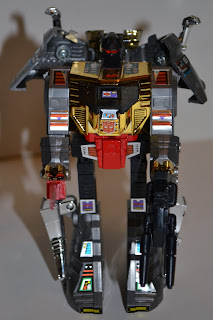 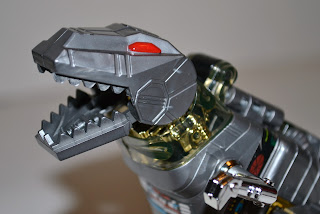 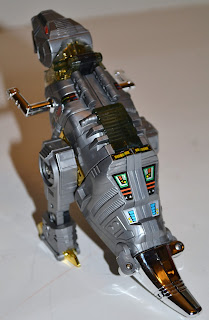 Grimlock is another fan favorite.  However the price points I've been seeing for him (and pretty much all of the dinobots on ebay cept for Slag) have just been wayyy to high.  Have you seen the price of Swoop even withOUT his head??? Sheesh.  I never owned this guy as a kid but loved him on the show, in the movie and had him on my bedsheets so it was great to finally unwrap a Grimlock in a perfect G1 looking box...Except for the fact that the KO box calls him a Bommander instead of Commander. Oh well, that's why it's cheaper.  Besides that, I love this guy...he's got a special place on my desk as I type this.  He looks great, transforms perfectly, has perfect paint and chrome and his weapons are very well made...the only gripe is the sticker sheet the seemed a bit off center in how the decals were cut but you can judge that based on the photos.  Say what you will about KO's, if just having items that capture the feeling of owning an original G1 is your goal, these guys are for you.  I already have my eye on Cyclonus and Springer.