Welcome back to another review and feature from the Man who Stares at Toys! I've been seriously delinquent with my posts this week...lapsing 6 days is inexcusable in my mind so I'm going to try to churn out two posts today (hopefully)... This first will be Transformers (with a little Masters of the Universe in there)  The next will pertain to some Vintage GI Joe Sunbow Movie stuff. We're talking Rawhides and Renegades, no Cobra La though, what a shame.   Ultimately, this post is dealing with two formats of toy blog.  The first is a straight up review of a G1 Decepticon and the second is to highlight some shots of my cousin (in law)'s  toy collection. 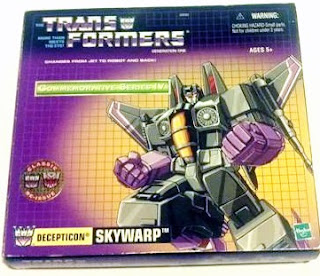 The Decepticon who is the subject of this review is none other than Skywarp.  He, along with his counterpart, Thundercracker, are some of the first characters we meet in episode one in their cybertronian tetrajet alt modes when they catch Bumblebee and Wheeljack taking energon units.  This teleporting seeker jet was one of the first Decepticons we see in action when they begin mixing with the Autobots in the early season one episodes and he gets a good one-two shot at Ironhide after teleporting behind him.  This is only after Ironhide stupidly charges ahead regardless of the other autobots' warnings.  Eventually Ironhide will die at the hands of Megatron in the animated movie along with Prowl, Brawn and Ratchet and Skywarp along with the other Seekers will be badly damaged in Megatron's attack on Autobot City and will be abandoned to be remade by Unicron into either Cyclonus or Scourge... such a bummer that so many great characters bite it in the movie. 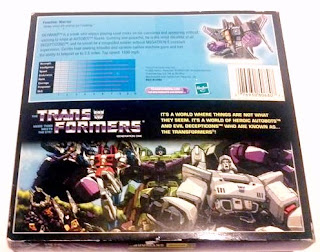 The toy's version I got my hands on was a beautiful reissue edition from the Toy's R Us commemorative series IV.    He is well packaged and displayed in wonderfully illustrated box art.  The front depicts Skywarp in a  threatening pose and impressive in high detail and the rear of the box has his stats on top with a nice wide pan of various Decepticons including the Insecticons, Megatron, Starscream, Thundercracker and Devastator (No Skywarp though).  This box features a nice Velcro sealing flap to display the toy through a clear plastic window as well as photos of the Series 3 and 4 collection bots in robot and alt modes.  They include:  Jazz (Meister), Thundercracker and Silverstreak (Bluestreak) as well as Prowl and Red Alert.  The packaging art alone is worth laying down a couple extra bucks in an auction although I do say I enjoy the design of the Japanese "books" and encores a little better.  Honestly, why is Japan still re-releasing fan favs like Soundblaster but the States aren't?  We get "bot-shots" and "Prime" crap but nothing to keep the Throwback fans happy as far as major brick and mortar retailers go?  Oi. 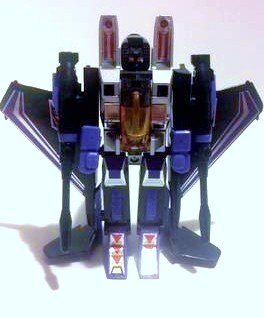 Skywarp figure is of the iconic seeker model similar to Thundercracker, Dirge and Starscream with removable landing gear, fists, rocket launchers, wings and stabilizers.  He's a sight to  see in impressive Decepticon silver and purple.  His missiles shoot and you get a long and short set to choose from with this guy.  Decals were nice and colorful and application was a breeze.  I lucked out and got unapplied decals so I got the pleasure of putting them on myself...one of the best feelings you can get with collecting toys in my opinion.  He looks especially cool in his alt Jet mode and his transformation is fairly simply beyond flipping the wings and applying the fists.  My only gripe is that the wings are very fickle about staying in place and fall off very easily.  If your displaying him this is a minor issue.  Another nice feature is that his orange clear plastic cockpit opens on a hinge. 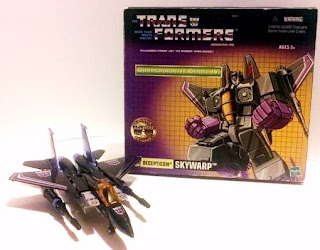 Skywarp is an all around great figure and is a clear reason why Transformers endured the way they did up to this very day.  I'm extremely happy that he was my first big time Decepticon I got my hands on  and until now, its has really been Autobots filling my ranks.  Strangely, good guys outnumber bad in nearly all of my collections, Joe's, Turtles, Star Wars...weird. 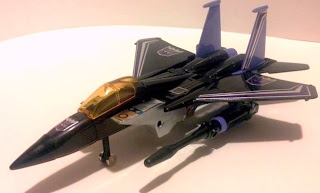 Since we are on the subject to Transformers, I'd like to use this review as a springboard into highlighting a pretty nice collection.  This is the setup of my cousin-in-law John.   His man-cave, well, man floor is the  basement of his home similar to a place suitable for trolls and Orcs to live where I'm sure many of us married men need to horde our collections be it in closets, basements, attics, dark corners and crawlspaces away from the sight of our significant others.  (we should be so lucky...really, we should)  John's whole display was really the motivation for me to set up my own toy room and what started as putting up a "shelf or two" has clearly expanded beyond where I ever thought I'd be.  Thanks buddy, my wife thanks you too (eyeroll included).  A whole point of my blog was to highlight not only my own toy selections but to cover collections of my friends as well.  If I could only get my uncle Brian to show of some of his stuff... can you say Death Star or Well of Souls Playset?  I should get a petition going.   Time will tell.

Anyway, John's got a great selection of various Transformers and Master of the Universe toys and he's kept many of them in great condition.  Whole lotta G1, Encores, Reissues, Generations and Universe stuff with a ton of nice packaging and shelving.  The Transformers get their own little room and He-man gets a much larger wall in the main area of the basement.  Let's take a look.  Mind you, these were the absolute first toy photos I ever took last summer so be kind to my somewhat less than par photography.

This concludes my first fellow collector feature, if you would like any more shots or detailed features, drop a comment and I can always get more photos (better ones, I swear).  If you like what you saw, feel free speak up!  I'm sure John would love some validation for his growing collection.
Posted by Mr. R at 12:17 PM