"Hey, there's only five of ya!" Five indeed... In the spirit of the postponement of Retaliation until 2020 or whatever because we'll now be having two movies that try to kill off Duke and can't do it, I'm going to be focusing on some of my own Joe movie related merchandise.  What we're looking at is a little review of the add-on characters to the G.I. Joe universe from the TRUE G.I. Joe film, the animated movie...We're checking out the Joe characters, not the abomination of continuity-death that was Cobra La.  This movie used its opportunity to re shift the focus on a newer enemy and to introduce the audience to a new set of Joe's (many of whom we see little of, if at all, in the future episodes) all while not going balls out and murdering half the original cast like the Transformers did.  They did attempt to kill Duke but he was added back in with a half-assed voice over "Just got word Duke's okay...from that python bite...to his heart."  Way to take a risk, I mean, without that safe move we'd never get the amazingly awesome Battle Corps or Star Brigade Duke figures!


This is a reason I like the Joe movie less and less each time I watch it.  It will always be superior to the live action AAA title but there was just such a "meh factor" (Ex-football player Joe? Circus Joe? Basketball themed Joe?  a Cobra Force clad in pink, red and purple?) to the characters they added and although some of the characters were memorable, none of them got the intro like Sgt. Slaughter did in "Arise, Serpentor, Arise" when he shows up and annihilates an army of B.A.T.s single-handedly.  Granted, we all got to see our new Joe's seemingly kick Beach Head's or Falcon's ass and the Renegades take out the TerrorDrome without breaking a sweat, again, Falcon gets his ass kicked.  Speaking of which, a ton of Joe's get their ass kicked in this movie; Snake-eyes gets bitch slapped, Gung-Ho, Alpine, Road-Block and Bazooka gets tossed around by Nemesis, Quick Kick gets taken out in a second...why is it in any of these movies when a new enemy is introduced, the heroes get the floor mopped with them but somehow by the end with no reason explaining it at all the heroes come back to win a seemingly flawless victory?  Just sayin....  I will say every one of these characters beat out pretty much every figure made after 1991 and they are colorful well made figures, but anyhow, let's take a looksie.

The first group is the new Joe recruits known as the Rawhides...tasked with being trained by Beach-Head, the insane drill instructor and special forces trooper extraordinaire... He effectively yells at everyone while they pretty much sleep walk through his challenges in standard or kooky unorthodox methodology pissing him off even more.  I don't understand Big Lob and Tunnel Rat pissing him off since they pretty much take on his challenges according to their specialty... Chuckles, on the other hand, blows up a HISS by throwing a HAVOK missile at it.  Pretty bad ass, the Expendables don't hold a candle to Chuckles!


The Rawhides' figures were pretty well designed and nicely packed with cool accessories.  We had Jinx the crimson clad female ninja with a twin set of (easily lost) swords along with a black backpack which holds them nicely.  She also has a nicely made Najinata staff.  I very much enjoy the little details of her shoes and her nail polish.  Good attention to detail Hasbro!

Tunnel Rat was modeled a wee bit smaller than his fellow Joe's to match his diminutive size.  To make up for it, he gets a super sized rifle (kinda looks like an MG-41) with a scope the size of his head,  a sling satchel, and a backpack with two removable torch lamps for his underground traversing.  He also comes molded with ammo belt, leg knife holster, shoulder holster and camo paint pattern.  One of the only early Joe's to get this.

Chuckles is kinda so so.  He's supposed to be a deep cover CIA type, clad in Parrothead Hawaiian shirt.  He gets a nice belt with holster for his sidearm.  Decent feature that, again, many Joe's do not have even though working holster came standard with all the 25th anniversary Joes. 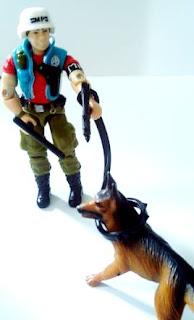 Law and Order, the Canine MP unit.  Good set of figs.  Comes in very well made MP uniform with vest, badge, holster and grenades.  He gets a machine pistol, nightstick, MP white helmet and leash for his partner Order, a German Shepard.


Lt. Falcon, the only Rawhide of seemingly high rank...doesn't he outrank Duke at this point?  He's a pretty pricey guy on the aftermarket, I snagged mine for 12 bucks complete and that was a good price.  He comes in Green Special Forces uniform with jungle camo pattern, H-web harness and beret sculpted on the figure.  I always considered him very close to the make of the Flint character.  He gets a backpack and shotgun the kicker though is that his backpack also gets a combat knife which attaches to the side (a la Snake Eyes or Storm Shadow) and a removable radio antennae for his pack (a bitchingly easy to lose piece).  He's many fans favs although, in my opinion, Law and Order take the cake for me.

And then there's Big Lob...wait... nope, Hasbro didn't make Big Lob.  Strange, I mean I know fans weren't exactly clamouring for this figure to get made but Captain GridIron? The Fridge? Hardball??? You're making sports themed Joes, so why no Lob?  There are a few nice customs floating around and the Joe Collector's Club issued a 25th anniversary version of him but that's where we stand as of now for the lost vintage Joe.  Crowd ain't the only thing goin' bananas!


Next up are Slaughter's Renegades.  This rag-tag group of problem recruits are denizens of the Slaughter House...within apparent driving distance of the TerrorDrome and Joe Headquarters.  They are the bad-asses of the Joe Team.  We've got Taurus (ex Acrobat), Mercer (ex Viper) and Red Dog (ex NFL lineman).  Colorful bunch.  Let's have a look. 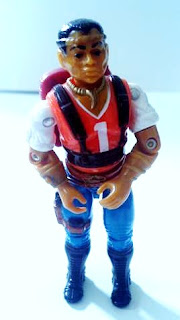 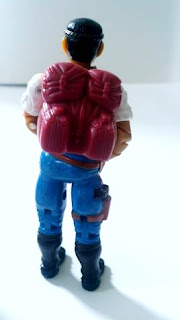 Look what just dropped in bruddahs, 170 lbs of Air Pollution!

Red Dog is a decent enough made figure.  Has a nondescript NFL jersey  with a pretty detailed belt buckle showing off a sun and a gold necklace with a lion's tooth on it.  Red Dog is also of Native American ancestry adding to the diversity pool of the Joe team.  He gets a gun and backpack, standard fare. 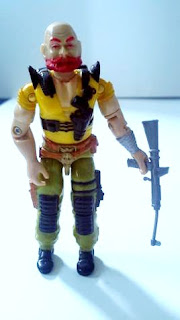 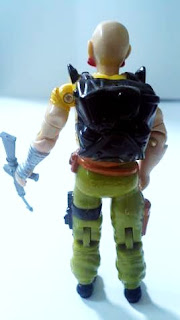 I do not like his face. Let us remove it, yes?﻿


Taurus is pretty ridiculous.  His color patter is ghastly in lime green pants and a yellow shirt with not much going on.  He gets a backpack and silver gun, standard fare.  I do like his head sculpt though, it's very angular and he seems like he'd fit right in with the Oktober Guard. 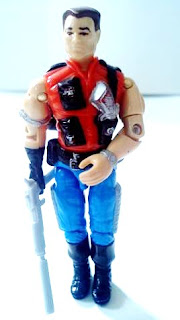 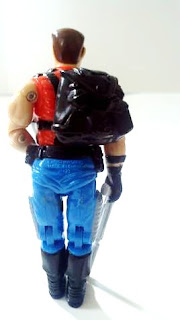 Last up is Mercer, my fav of the Renegades.  He gets a pretty cool sub-machine gun with silencer attached and a pretty basic black backpack.  He kinda looks like Van Damme and I was obsessed with his movies as a kid so maybe that's the affinity I have for the guy.  I think he also is the figure with the most wasted potential of the group being as he's an ex-Cobra Viper, Hasbro really could have made him more played up on a bastardized Cobra uniform to show him off more like a defector.  Like a twist on the Viper uniform or a customized Cobra Blue Trooper's uniform.
Posted by Mr. R at 7:14 PM