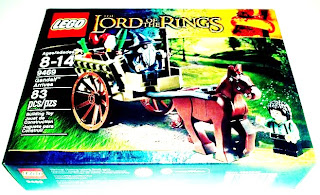 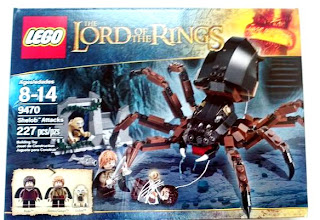 Holy hell, I could barely believe my eyes as I was traversing my local Wal-mart after work last week in my near daily quest for the last three waves of Star Wars Vintage Collection figs and was disappointedly walking back to the food aisles but when I noticed something...in the discount aisle....a bunch of newer Lego sets?  What brand is this?  LEGO LORD OF THE RINGS?!?!?!? ARE YOU FREAKIN KIDDING ME?  Granted, I know these aren't rare items but it was something I vaguely heard about months ago, said to myself "cool" and moved on.  It was just such a nice treat to see a fully stocked anything in Wal-mart, let along such an awesome set of products.   I picked two sets (Gandalf Arrives and Shelob Attacks) and my wife got me a third on Sunday. (Uruk-Hai Army)  These are such amazingly cool sets, I really think I'm about to get back in the Lego Pool considering the mother of all Haunted House sets is slated to release this September.  Just thinking of all the times I pretended to play Lord of the Rings with my castle sets as a kid and finally being able to do so just blows my mind...kind of weird that Lego is so far behind the trilogy unless this is to whet our appetites and bring the franchise back into kids minds before the Lego Lord of the Rings video game is released soon and The Hobbit is released this Christmas.  I gotta tell you; if I needed shelf space before, I desperately need it now since we have Weathertop, the Orc Forge, Helm's Deep and Moria still to contend with!


Castle System, eat your heart out... this new line seems to take all of the cool elements which have evolved over time and is culminating into a great utilization of accessories, minifigs and innovative construction.   The character designs are spot on, we have multiple facial expressions and custom painted bricks to make these sets all the more authentic...I will say they still don't hold a candle to the fan made sets  shown here (even though those sets, if released at retail, would probably fetch more than the Death Star) but who cares?  LOTR is still LOTR! 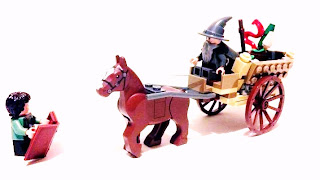 The first set I grabbed was "Gandalf Arrives" depicting one of the first scenes of Fellowship of the Ring.  It was priced at 10.99 at Walmart and is a nice starter set...Apparently minifigures will be released in solo baggies but not yet...this will be a must for army building because besides Stormtroopers, I would really see a need to get a whole bunch of Orcs, Uruks or Riders of Rohan.  It's a pretty basic set but depicts the scene nicely.  You get a wagon with adjustable sides, fireworks, letter accessory (where the ring was kept), a carrot, Horse (Bill?), Gandalf and Frodo in Shire dress minifigures. There are some nice details like a Dragon firework, wizard's staff and cloth cape for Gandalf. My only real complaint is that the reigns for the horse aren't articulated at the carriage connection so the horse can only go straight ahead... disappointing since Lego had this issue fixed since their earliest cart/wagon sets.

I immediately returned after work the next day and picked up "Shelob Attacks" from Return of the King.  This is the slightly bigger LOTR set featuring Samwise, Frodo, Gollum and Shelob.  Also included is a small cave encove for Gollum to hide.  The star of this show is clearly the massive Spider, Shelob.  It is constructed in two portions with a front consisting of head, fangs, legs and torso and a rear connectible piece consisting of her rear portion with a retractable web.  All of the parts are on multi-staged positionability with legs that can be adjusted in three separate areas. The head and maw are both hinged and adjustable as well and the eye piece even illustrated the small detail of Shelob's one missing eye.  The set gives all three minifigs some real nice attention to detail.  Gollum is a totally new sculpt with adjustable arms and a solid body with nice facial features and he gets a nice little fish accessory to boot.  Sam and Frodo come with their elven cloaks, changeable facial features of battle ready and panicked as well as a ring, a sword, Sting, and the light Earendill.  Super cool set for 19.99.

The last and most recent was the Uruk-Hai Army set I receieved on Sunday.  This depicts a small vignette of the Battle of Helm's Deep and is mainly an army builder kit.  It includes 4 Uruk soldiers, an archer of Rohan and Eomer minifigures.  The constructable brick sets are a Ballista siege weapon for the Uruk-Hai and a section of the wall of Helm's Deep for the Rohirrim.   The wall is set up nicely to be made in a broken down, overgrown fashion with green bricks to accentuate moss growth.  It comes with broken battlements, a small arrow slot on the bottom, a small catapult on the second level with three rocks to throw, a battle flag and a torch.  The Ballista comes on four wheels with two launching hook spears, twin side spikes and adjustable balance bow on both sides.  This is also built to fit the ramshackle look of Saruman's forces.

The minifigures are the stars here.  We have 4 Uruks with varied armor and weaponry with a nice spot on Uruk Helmet for 3 of the figures and long tossed hair for the fourth.  Two have black/grey armor along with two Uruk Battle Worn shields, 2 angular swords, 2 long dark grey axes and dual facial expressions for the Uruk's (pissed and more pissed).  The Rohan archer is nicely decked in green and brown with a beaded face and Spartan-esque Helmet and Eomer is amazing with green cape, custom spear and beautifully detailed shield, a silver helmet trimmed in gold leafing, chain mail designs on legs and torso and long sword which fits into his saddle atop his mount.  The coolest feature on this set is the option for interconnnectablity as the sides of the wall section have attachment points to build the wall as long as you want to with additional sets and eventually to the larger Helm's Deep lego set all while building an ever growing imposing Uruk-Hai force!  This set ranges from 29.99 (Wal-Mart) to 34.99 (Toys R Us).