We're back with some more vintage 1980 Kenner fun.  This time, in the form of the Rebels on Hoth which constitutes a great section of the saga.  (I'm thinking I'll do all the Imperials together in a separate review)  The battle of Hoth was such an iconic part of Empire Strikes Back and we know the rebels are in for the long haul from the very start as a Star Destroyer is literally probing the planet, Han's packing up to leave, Luke gets attacked and hung to rot, Leia is perpetually pissed off and the cast essentially gets separated until Han gets thawed out in Jabba's throne room.   This was all framed by great costume and prop design, debuts of fan favorites like the AT-AT behemoths, the Snowspeeders, the Probe Droid, Tauntauns, Rebel Transports and my personal favorite Imperial officer, General Veers.  I can't imagine how many kids' snow days became miniature Battles of Hoth in front and back yards all over the country.  The question would be, "how can I make my battle convincing?"  The answer would be: With these little gems from Kenner toys!  As Master Yogurt said, "Moich-en-dizing!"

While I started my big vintage figure review set with the Kenner ESB Bespin line which I kinda slugged through as I was not a huge fan, this is a labor of love.  Besides the Jabba related stuff, Hoth was where it was at for my figure collection.  Super cool uniforms, goggles, communicators, vehicles, the whole shabang is in this setting.  Being a belated collector even as a child, all I could do was wish for chances to get my hands on stuff like the Hoth Radar Laser Cannon, the Imperial Heavy E-Web Tri-pod Laser Cannon, and the Imperial Attack Base.  Slowly I've been rebuilding some of this great stuff after selling off some of the bigger things I simply didn't have room for like the Towers from the Rebel base and an incomplete AT-AT and Snowspeeder. (I'm still on the hunt for the Wampa since I consider him a figure as I do with the Tauntaun and Rancor)   So, Let's take a look. 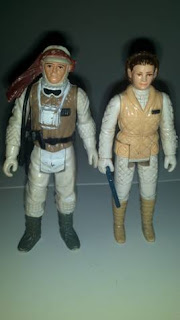 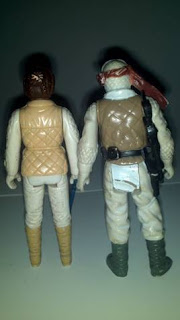 Simple but says it. ﻿

First up are the Skywalkers, both Luke and Leia.  This is my absolute favorite rendition of Luke.  I had three of this figure growing up.  It was something about goggles and visors with me as a kid.  I loved the look of the Hoth Luke figure with his scarf blowing in the wind and his scanner molded into his chest.  He was just a cool figure all around and really shows a stride in Kenner's step from where they started  with their somewhat basic New Hope figures to this and many of the Empire figures  which had a whole lot more attention to detail being paid to them. ***side note: I also had his original blaster (which is common) the entire time all the way back to when I got him 23 years ago and never knew it.  Always figured it was a Joe rifle.  They wasn't any whobit around for us collectors then.  Leia is a great representation as well.  Normally, Leia is a challenge as I previously said on her Bespin figure.  Her Endor figure has a very small head, Hasbro made her look like a monkey, it just goes on and on.   Hoth Leia, on the contrary, actually looks like Carrie Fisher!  She's in her winter gear with simple but detailed molding of warm weather vest and wrist communicator.  Her hair braid is nicely done and her facial details aren't too heavy handed.  Score one for Kenner Toys! 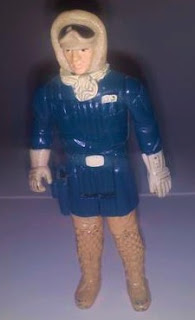 We then move onto Han.  Nice mold of him in Search for Skywalker mode with his hood up and they chose to mold his goggles up like Luke so we can see his face.   The face looks like an okay rendition of Harrison Ford but he works well in his outfit.  They have him in standard articulation but they molded his long coat very well into the design.  He has nice Hoth patterning on his leggings, boots and gloves with a standard Han Solo holster and belt on the externals and his holster has an added touch of an extra flap curl.  It would have been better if they hollowed out the inside and back so you could fit a blaster in there.  The coat face and belt are nice for the basic paint application but the legs could have used some more work.  All in all, decent figure which you can get very cheap on the after market. 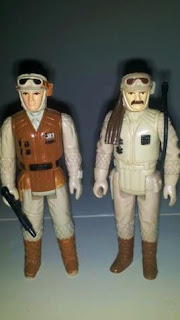 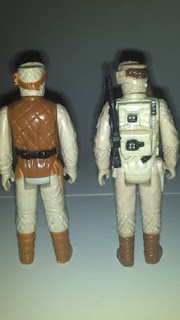 Not crazy abou the designs but still good.  By the way, how come Kenner never made a Tantive IV Rebel Figure?  Woulda made sense to have a character kids could buy en masse to fight the Stormtroopers in the scene that pretty much had us hooked from the first minute of the trilogy.

Next are the two Rebel Troopers both Solder and Commander.  It amuses me to no end that John Ratzenburger had his likeness molded in the form of a Star Wars figure.  Eat your heart out Norm Peterson.  They are okay renditions of their film selves as the paint application is extremely basic.  They molded the Hoth Soldier in Echo Base gear in contrary to Battle Gear which has more grey and white then white and brown.  The commander is in a nearly all white uniform with touches of dark grey.  The face sculpts are okay but they could have done much more with these figures.  They have nice communicators molded into head gear and wrists and they possess the warm weather criss-cross patterns on their coats with standard molding on their leggings and footwear.  The rebel Commander also gets a pretty decent backpack with paint touches on his back.   Accessory-wise, the Hoth commander gets a copy of Luke's rifle with sling and the Hoth Soldier gets a Bespin Blaster. 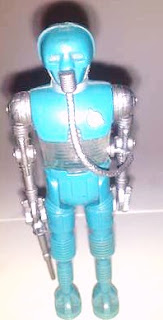 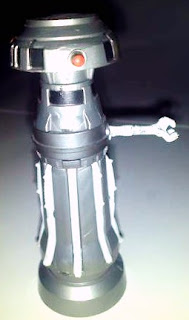 Last for the figures are the two Rebel Droids found in the medical bay of Echo Base.  2-1B and FX-7 are the alphanumerics to identify the two super cool robots which we see briefly assisting in Luke's recovery.  (If you owned the VHS copy of the movie, you didn't even get to see FX-7 due to the cut of formatting)  He was one of the coolest droid designs in my opinion with all of his arms, his syringe like center conduit and rotating and telescoping head.  They really nailed his likeness and had very satisfactory paint application very similar to his counterpart 2-1B.  2-1B actually gets a bit more screen time and some lines when he's getting Luke prepped for his Speeder and later is seen testing Luke's biomechanical hand at the end.  Pretty important character, no?  He is a perfect rendition of his character in figure form with a spot on mold of the droid with see-through lower torso, hollow eyes, face tube, needle accessory and thin legs with perfect paint.  He is a figure that really doesn't need an update.  Power of the Force did an okay job (better than most) but it still doesn't come close to the original 1980 release.


Finally, we have the mountable Tauntaun.  Tauntauns were super cool.  The Speeder Bikes of Empire Strikes Back for the countless children who could only dream about riding across their neighborhoods on the backs of these creatures who appeared like some crazy hybrid cousin of something from the Outback.  In my opinion, this toy is very important in that it shows Kenner's astounding ability to work with what it has and to use absolute innovation to find ways around limitations.  Kenner figures were very limited in articulation so the challenge arose on how a figure could look like they were convincingly riding this creature and Kenner came up with a fold down door to hide the figure's legs within the Tauntaun!  Once this was done, they added a harness and saddle which had external "legs" molded into the side along with saddlebags and other equipment creating an illusion of the figure perfectly riding the beast.  So cool along with a great set of reigns which fit snugly into the Tauntaun's mouth. They mold is superb with nice horns, movable legs and arms, a lifelike face and great paint application.  This accessory also came in a  "Cutaway belly" to relive the great scene where Han gets his first shot at using the Lightsaber...ewww.  Now if I can only get my hands on a Wampa...