Mutants and Aliens and Toads Beware!!!

Happy Memorial day weekend folks! It's time for a mid holiday break review and random prattling on from the man who stares at toys!   I'm going to put out a few sequential posts and make this into a melange of a few ideas I've been meaning to do over the last few weeks and just bunch it up so feel free to scroll through and see if anything tickles your fancy.  More will be coming very soon from now to Monday so stay tuned!

First up, I want to show off some very neat finds I've managed to score for a steal on ebay over the past few weekends.  It's some Bucky O'Hare action figures I found on the cardbacks and about three bucks each and boy are they purdy.  I'm not really trying to get into any new toy lines but I've always been checking about for this toyline ever since I re-discovered the power of on-line auction sites.  This is a line I always liked as a kid but was around just too short to get into.  Based on the comic of the same name, it debuted in 1991 and only lasted 13 episodes.  I remember catching an episode or two and really liking it but honestly can't even remember if it was on during weekdays or weekends. (I'm guessing Saturday mornings) I remember the toads seeming like such creepers on the show and the whole concept was something I immediately thought of when I popped Star Fox into my SNES years later. Even now looking at the toy commercials, it still makes me want to "collect em all!" haha.

Ninja Turtles and Nintendo games were my thing (as well as Ghostbusters and Legos) so my parents were very adamant about me not moving into other toy lines and thus the only way I ended up with anything besides these franchises was through relatives getting me randoms here and there like one year when I scored a mess of cool Kenner Beetlejuice figures for my birthday.  Here's the few I could find before selling them off  to some lucky chap to bulk up the Joe collection. 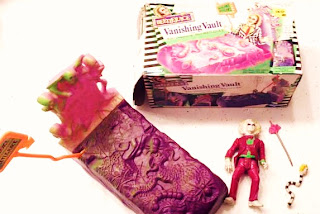 Anyway, this wasn't the case for Bucky O'Hare who's designs I loved (along with the Dick Tracy line)  They were clad in super colorful packaging and figure design that came in almost a comic book format.  I found them very similar to the Playmates TMNT line in many respects and until this year always thought Playmates, not Hasbro, produced this line.  This toy line unfortunately came to a screeching halt with the lack of popularity in the series and overstocking of the Toad Air Marshall figure causing low sales numbers and a discontinuation of the line (which already had a wave two in production).  Bummer.

What we have here is Bucky O' Hare, Commander Dogstar and Storm Toad Trooper. 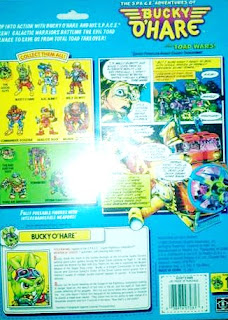 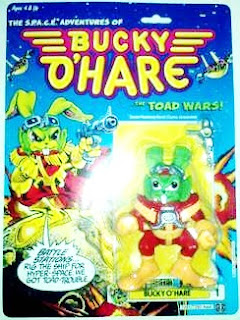 Above is the commander in his nicely illustrated packaging, way to ring in the 90's!
(sorry bout the flash)