To respond to a topic posted by a much respected and frequently read fellow blogger, cool and collected, I'm focusing on the question, "besides the Batmobile, what is the coolest ride cruising the streets of pop culture?" I really had to do some serious thinking about this. Besides the caped crusader's ride (of which I have a picture of myself sitting in the original Adam West version at a car show) there are some real obvious choices. You have the Delorean, the Ecto-1, any Transformer, any car from the 70's-80's which stood in as the trusted steed for the new breed of lawmen or lawbreaker, hell...does the TARDIS count?


What I wanted to do was pick some road vehicles that not only stood out to me over my formative years but also would be one's that are iconic but may be off our immediate radar. They are from a few varied properties in animated, toy or film formats. These are in no discernible order besides that fact that they all are undeniably sweet-ass rides. 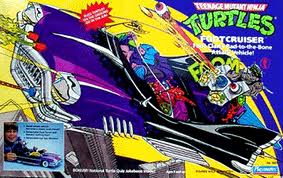 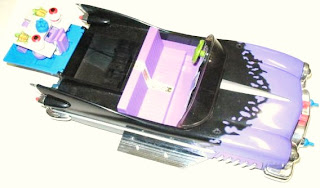 First, we have the Teenage Mutant Ninja Turtles Foot Cruiser. Holy hell, this is a beauty! Everything about this particular vehicle just screams quality. In fact, almost all of the major TMNT vehicles were high quality, amazingly designed pieces. It retained such a spot on look from the animated property (which Playmates Toys did with expert levels of craft) and had such vibrant colors and accessories, it was simply a feast for any child's eyes to behold. Many people would prefer the Turtle Van (a great vehicle in its' own right) however I think this selection takes the cake for ground vehicles... In fact, the Foot Clan did seem to get the cooler stuff, from the Technodrome (In my opinion, one of the top 5 playsets ever produced) to the Mutant Module. 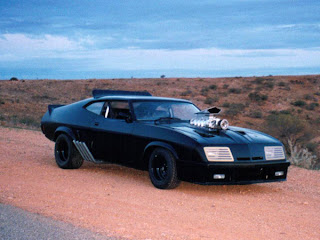 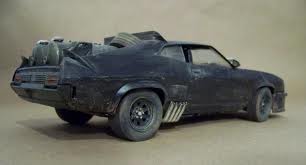 Mad Max's Interceptor. Starting out as an Australian exclusive 1973 GT Ford Falcone Coup, this car has totally stood the test of time as a vehicle synonymous with utmost badassery. *technical term* I remember liking this car from the first time seeing it on TV before I could comprehend what the hell I was watching. From toddler size, I knew this car demanded respect. Honestly, in the Road Warrior I tend to get a little antsy with some of the dialogue and acting but the car (as well as costume design and most of the other vehicles) always managed to keep my attention. This is a production where the car is just as much a character as our protagonist. It might not talk like KITT but it definitely has a vibrant personality all its own. 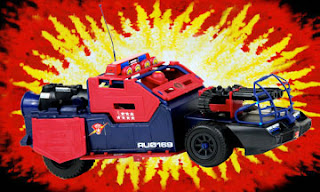 The Dreadnok "Thunder Machine". Apparently some people at Hasbro thought the same thing about Mad Max as I did because this beastie looks like it could have been riding the wasteland scrapping for fuel. From the armor plating to the awesome bullet chain firing Gatling guns, this is a serious piece of Cobra Machinery. Couple that with some sweet Cobra red and blue and you got a stew goin'! Never owned this puppy, but some day it will mine, oh yes, it will be mine.


Honorable Mention: Okay, this doesn't technically count as a car per se but it does have wheels and travels the road.... well the roads of colony LV-426. That's right, the USCM M557 APC. Giant wheels? check. Huge cannons? Check. Dropship compatibility? Check! Many a drawing of mine from grades 5 through 8 (the "Aliens years" for me) were spent centered around this military vehicle as well as SMART guns, xenomorphs, the USS Sulaco, Dropships and all things related. Always wanted one in toy form but it never was to be...kind of bizarre really that this has not been immortalized in plastic. 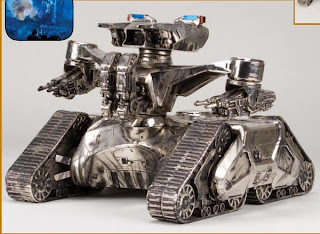 And for really off the grid stuff that pretty much doesn't have a chance of counting besides the fact that it's wheeled. The Skynet Ground Hunter Killer... shoots lasers, crushes skulls, looks how the Transformers should have looked in a live action movie instead of whirling pieces of garbage. Could have been Johnny 5's deranged half-brother. 'Nuff said.

Check out  FLYWHEELS's post  for a great Transformer pick!

Stop by the Dork Horde's Lair to see some fine work featuring the Duke's of Hazzard, General Lee!