Transformers Review: G1 Blitzwing Triple changer (Fighter or Tank? Why not both?) 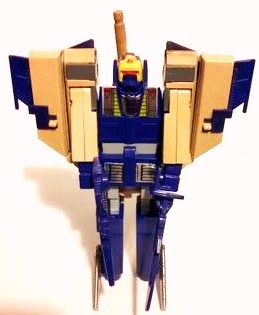 Even until very recently, I've been pensive about growing yet another collection on top of the Joes and Star Wars. However, I'm just about done getting what I want from both of those collections save a few major money items. (POTF guys, blue snag, straight arm Joes, snake eyes v1 and 2, etc.) From there, I thought I'd get into building a small, respectable G1collection. As of now, I only have three small shelves fo these guys but I'll tell you, it's addictive as hell! I've talked about "toys that got away", or "toys that time was unkind to." Well after you lose a bag of G1s that seem to walk off the face of the planet without a trace, you kind of have a sour taste in your mouth regarding that specific toy line. Especially since said bag contained; (no word of a lie) Optimus Prime, Shockwave, Blaster, Ravage, Jetfire, Cyclonus (with box), Warpath, Powerglide, Laserbeak, Rumble, Eject, Frenzy....well pretty much a giant bag of money in collectible toy form. If your any type of G1 enthusiast, you hopefully can feel my pain.  The bag is still lost to this day, probably next to One-Eyed Willie's "rich stuff."  note: Besides in "the Goonies", did you ever hear anyone refer to treasure as "rich stuff"? 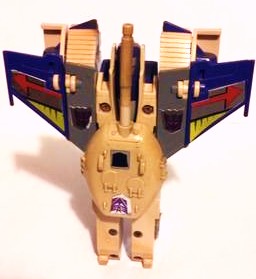 Anywayssss.... we're looking at the Transformers G1 Blitzwing.  I just got his weapons in the mail for a mere 4.00 and managed to get some repro labels for this guy on clearance for 99 cents so after spiffing him up a bit, I wanted this fellow to be my first Transformer I showed off on the blog.
﻿﻿﻿﻿

I'm focusing on Blitzwing because of the formers I've been getting he's one that was at the top of my list.  He was part of the triple changers line and was one of the top selling toys of his release year in 1985.  I love his colors, both of his alt modes as well as his robot mode and the fact that he's a tank.  My favorite guys were the tanks with Warpath, as diminutive as he was, being my all time favorite Transformer.  Brawl was a recent purchase as well just to fit in with the tank theme. I always thought Blitzwing had such a German WWII Tiger Tank look to him (hence the Blitz in his name) even though he's supposed to be a Japanese type 74 MBT.  In jet mode He's a Russian MiG 25 fitting in well with emulating a figher synonymous with the Evil Empire of 1985 when he was released.  Not only is Blitzwing amazing to look at and have swift killer transformations, I got him for next to nothing!  Decepticons Attack!