Hey folks! Just got back from my day with the wife visiting friends and in-laws, eating ribs and driving in a torrential downpour home.  Just want to get a second post off for this Memorial Day weekend triumvirate.  Tonight, I'm thinking Legos and Star Wars.   Nothing fancy.  They both were absolute mainstays of my young to early teen years and have just recently received more firm attention since college and teaching in various schools.

When we moved into the bigger digs, one of the first things I did in my office/toy room was reconstruct all of my old Lego sets which, until then, were all combined in a giant storage tub.  It was seemingly an impossible task until I discovered a ton of original packaging along with all of my instruction booklets in my attic during my epic month long attic clean out at my parents' house.  Building the castles and various playsets were relatively easy but the challenge was in getting the small vehicles and accessories back together.   One that especially stood out was this guy; the Dungeon Hunters released in 1990. 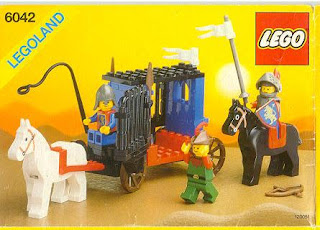 This was part of the Crusaders Castle System line ranging from 1984 to 1992 and was one of many carriage designs and actually very similar to the "Prisoner Convoy" set that came out a few years prior.  This, in my opinion, was when Lego was at its zenith.   Each of these sets were extremely resourceful and produced with a level of creativity that could not be matched.  (the new sets look cool but they are so specifically built for their main purpose it seems...The newer "Knights" sets, beautiful as they are, I find leave little to the imagination)  Lego always had a great place in my heart from my early years and I remember it being everywhere...even in checkout lines from any chain store, there'd be a little mini sets in a bag for like 1.99 featuring race cars, rafts, catapults and abundantly cool minifigs included.  Although I sold off all of my bigger sets, the smaller guys are all around my shelves and even in my wife's office.   Side Note: She absolutely forbade me to sell any of the pirate sets. 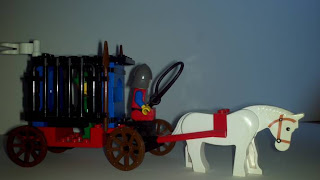 I loved the caged look to it, the ability to house prisoners, the harness... it was just so neat.  It also included a forestmen prisoner, a mounted knight in really cool armor and helm and a carriage driver so you could have a little battle between sides if you felt the need.   I remember the prison carriage being an important get for me because I was so psyched to use this to recreate Robin Hood: Prince of Thieves scenes (you know, the one with the wagon ambush...yeah, I know...shut up)  Anyways, here's a few more angles.


What started as castles, pirates and spaceships eventually discovered movie licenses and we were graced with Star Wars...  and Harry Potter, and Pirates of the Caribbean, and Batman, and Spongebob, and  Lord of the Rings, and  Minecraft, and  Requiem for a Dream...wait...forget that last one. Lego is seemingly a bottomless cash cow of liscensing opportunites to be sold to countless eager minds wanting to experience their favorite story in Lego form.  I only have a few original trilogy minifigs but here's my little contribution for you readers.  Not much at all but...

Told you it wasn't much.


Speaking of Star Wars, I wanted to show off two somewhat decent "Customs" I have or had in my possession.  First up was one not produced by myself.  It was a Hoth Trooper in Outdoors Battle Gear that my uncle Brian made and gave me when I was 7.  I believe he modeled the figure off this pretty common production still which was also used as his original cardback.  His retail model matched that of an echo base trooper which Hasbro fixed in the Vintage Collection by releasing both the Outdoor trooper (found in the ESB 3 pack with Leia and FX-7  as well as a newer carded Echo Base Soldier. (good luck finding that guy btw)

Also, I have one I made and was a figure as of yet never produced.  Take a hint Hasbro, you made (and remade and are remaking) figures like Prune Face whom we only see from behind for a split second yet you leave this guy untouched?  It's none other than the Imperial Security Bureau officer or (ISB officer).  These were the guys in white officer uniforms walking around the Death Star in A New Hope and you even see a higher up sitting in the officer's briefing with Grand Moff Tarkin and Vader (The officer's name was Colonel Wullf Yularen) and I am aware he was released in the Death Star Briefing Room Box Set but that still doesn't cut the mustard for me.  I can understand Kenner leaving him out (although I did find it bizarre they never made an Imperial Officer in green which could have been a super easy repaint and quite relevant since they are all over ESB and ROTJ... I mean, seriously Kenner, you make two Bespin Guards but not Ozzel, Needa, Piett or Jejerrod?)

I always thought these guys were super cool and always associated them with Navy (I guess "Navy whites") even though pretty much everyone we see from the Empire is Navy except the walker drivers and General Veers. Actually, their backstory goes way more sinister and they pretty much served as the Gestappo of the Empire, going into deep cover on Imperial assignments to sniff out traitors and report treasonous  activity.  (Pretty heavy stuff for a couple of guys who walked past a few scenes...still better made up backstory than any real "front"stories of 99% of the prequel characters)  I did what I could with him and tried to detail the rank as best I could.