As a child, I was a collector of a many brand of action figure, toy line and video game however I never really was one for life-sized (or kid sized) accessories. Sure, I had a random Return of the Jedi Lightsaber or something of the like here and there but it just wasn't my cup of tea. One exception though was the Kenner Ghostbusters Line. I always wanted to reenact the scenes from the movie and cartoon be it figure form or on my own.


Kenner was a master company at producing beautiful replicas of the animated product that were pretty spot on in many respects. Even the cartoon-inspired weapons and gadgets looked like they could have been in the background of any episode. They all had great functionality as well. The ghost popper shot foam projectiles (a la Nerf) the Ghost Zapper (the fist Ghostbusters toy I ever remember getting) had a super cool effect of projecting light images of various ghosts on a slide reel and had a multi frequency  sound emitter... seriously for 1986, that's insanely innovative! Recently, I let a bunch of these things go (and made really good money on it) but there was one specific item I held on to. It, in my opinion, is the mother of all childhood accessories. It is the Proton Pack. 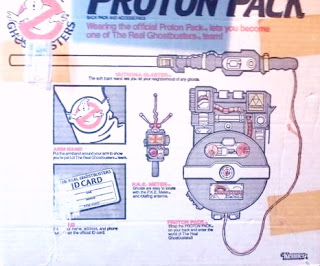 The proton pack is a great 1:1 scale kit. Nothing made you feel like you're part of the team like that did. It was a perfect translation to the animated Ghostbusters stuff and came with cool extras; the beam emitter (with firing action), a foam proton beam, the PK-E meter, an armband and an id card (which I lost). It was such a jam packed accessory set which I give Kenner props for bundling because they could have shilled parents by selling these items separately. I managed to hold on to the box and even looking at that reminds me of seeing it on the shelf at Children's Palace (now the inferior Toys R Us) and loving the awesome packaging artwork.   I remember drawing the "grabber" ghost so many times from the front of that box.  Drawing Ghostbusters stuff was pretty much the sole subject of what got me into sketching as a kid from ecto-1, to the Marshmallow Man.

﻿﻿﻿﻿
Kenner also made a cool Goggle and Ghost Trap set as well that functioned properly. The trap was extra cool for the glow in the dark ghost it included. I had the added bonus of this kit when my aunt's sister made me a custom Ghostbuster jumpsuit for Halloween when I was in grade school. Yeah, I was cosplaying before that even existed! Many a day was spent blasting pretend spirits around the house.
Posted by Mr. R at 9:00 AM