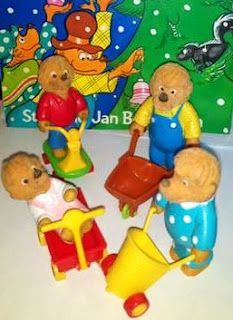 I said I'd follow up the Joe post with something a bit more random so here we are. These little guys have been synonymous with so many of our childhoods. I for one had about 20 of their stories. They had such neat illustrations that really rang true. Well, as true as anthropomorphic bears can ring. The junk food in the overeating one always looked so good, come to think of it most food in our kids books and cartoons looked awesome from the pizzas in the Donald duck golden book to gummie juice to the Ninja Turtles Pizzas which they managed to eat whole in one bite! I liked how the kids had problems we all did as kids from nightmares to messy rooms to nailbiting. My favorite being the one where Brother's sci-fi toys come alive in his dreams and attack him (the nightmare one). Well, besides my obvious bear-love, I also want to point out how awesome McDonalds was in their prime. You know before they got "urban" by "Lovin' It" and 86'ed Ronald and Grimace and the gang and parent groups didn't want to draw and quarter the Fry Kids for trans-fat content and before the utter ridiculousness of "Hope" in my happy meal, what "Mighty Kids Meal". Back in the day, even if you didn't like the food, McDonald's really was a master at promoting various children's licenses and products and producing fine, high-quality toys to go with it. I have a massive amount of these guys and am going to be displaying them over the weeks but I wanted to start with not only a complete set but one I really enjoyed playing with as standalone toys. These were the Berenstain Bears' which, I might add, was one of the only, if only, way to get these guys in toy format as was the case with Bambi, Fraggles, Muppet Babies and so on. (They are all coming up) From the pack in illustrations to the paint application to the actual fur they had, these toys were cool as hell for a 4 year old and still retain a lot of niche appeal just for collectibity's sake. Even though you've really lost your touch, hats off to you, Mickey Dee's for making some awesome toys even worth having still. 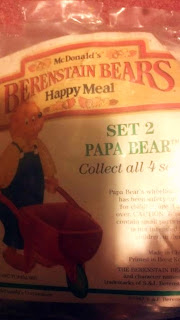