Gonna mix it up a bit and show off a couple very different items in these two posts.  My old blog name was "eclectic interests" so I wanted to keep that flavor and not get stagnated into just doing exclusively Star Wars or Joe stuff.  Now, I'm gonna start with some Joe and follow up with something a bit more random.  It truly was an exhausting weekend, visited both sides of the fam, traveled about the state, cleaned, shopped, went on a 4 mile adventure through our neighborhood with the bride but still managed to get home in time to snag a near complete G1 Metroplex for 40.00!  All in a day's work!  Also managed to find some super deals on the bay of e over the week for very little money and made the rank of "power seller"...whatever that entails. Honestly, two of these things I cannot wait to arrive so I can show em off on the blog...but later!  Anywho, I wanted to get a few posts in before another full school and work week get rolling so I'll get started. 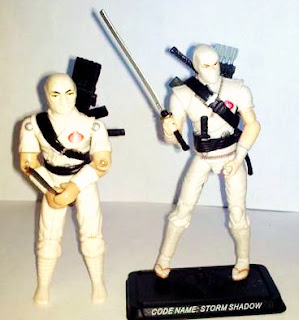 This, I can say without much hesitation is probably one of the most sought after GI JOE figures in the franchise. He is easily one of the most popular and has depths of back story, lore which entails an entire solo story for just him. We're talking about Storm Shadow (as well as his antagonistic compatriot, Snake Eyes) You can't tell a GI Joe story without some major Storm Shadow segues occurring. Even in the Animated Resolute shorts or GI JOE: the movie, he is a major player who gets his own chunk of the narrative devoted to him, his origin or his rivalry. (However, he doesn't even get a line in the Sunbow animated movie...yet Thrasher does...okay. Regardless, he is a definite fan fav, no matter how you slice it. 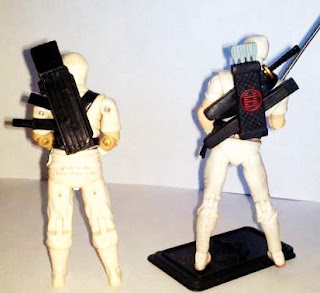 This vintage fig can demand some serious bread on the aftermarket. This is one of the guys that (as generous as my uncle was) was not given to me. I had to find him on the aftermarket, which I did this year. I got this one without the chucks or the bow (two insanely hard to find items that go for a tenner each) and just now noticed he's missing a thumb for 7 dollars but I don't care, I still think I got a great deal. He came with a file card too but I hawked it for 9 bucks a while ago. He's one of those "white" figures that easily yellows and stains and he is very clean with a crisp red Cobra logo on him. He has some great molding of a dagger and stars into his waist belt, his folding backpack and 4 ninja accessories ( I have two, the long katana and short sword ) He is classic cool and was worth a 29 year wait. 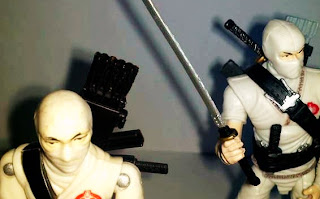 I also have him with his 25th anniversary counterpart which is just an updated version of the classic figure.  He gets an entirely new mold from head to toe and it looks brilliant!  He has much better detail with a removable belt and harness, as well as dagger, separately molded throwing star and painted logo on his sword casings.  The chest mold has almost a flap on the front to mimic the fold of his ninja gear and has some find painted detailing on the trim of the chest and bottom of the tunic as well as finely painted sandals.  They left nothing out on this guy.  Really, I want to say he's an exception to the 25th and 30th anniversary series but this is a standard level of detailing Hasbro put into the entire series.  These figs are so detailed, it just blows the mind.   I scored him for 10 bucks along with Snake Eyes and Timber  (anniversary edition of the version 2 1985 molding)  He is minus the chucks and bow but the arrows are painted silver and there is gold detailing on the sword handle which stand out as even more great touches.  Also, I find his facial expression to nail the visage from the cartoon series.  He is a perfect figure, in my opinion and even manages to edge out the original for accuracy.  Find him and buy him if you haven't already! 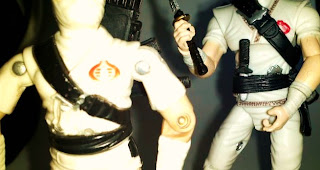 Also, for your amusement is another reason why we love the 80's!  Storm Shadow V2...a wonderful model of sheer hooded, urban-camoed, tattooed, badassery! 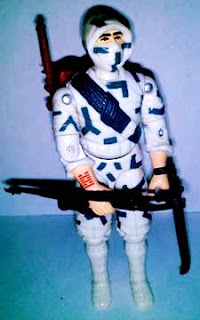 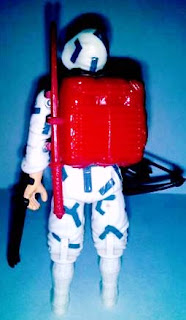