Mechs, Rabbits and Gremlins, Oh My!

Let's move into some random but neat items I have laying about my toy room...cough cough, office. hehe.  I sold one of these items and another I'm currently selling so I'd like to get a few words in about them while I still have them around to talk about.   These are all great pieces from my childhood and they all got some quality play time over the years. 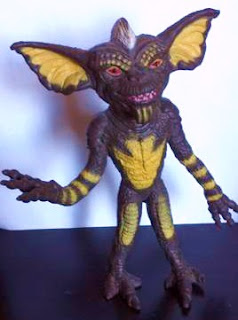 First up is my Gremlins Stripe figure.  He was produced from LJN toys in 1984 in a wireframed bendy rendition in the same manner as their wrestling superstars figures that soon followed.  He was part of a limited release to tie in with the gremlins movie and I don't think any other "bendy" gremlins figures were ever released.  He (Gremlin form and Mogwai form) and Gizmo were all
released as well in classic action figure modes and Gizmo was made into various sized plush dolls as well. I remember not going anywhere without my Gizmo as a little kid and even had him on a shelf in college but I lost him in one of my moves (still have a mini one at my parents house though ) Stripe's a very accurate depiction with the cool mohawk, long fingers and nice paintjob and anything with Megatron's voice (Frank Welker) is badass. Gremlins always is a movie I can watch start to finish no matter what is happening, it works on so many levels that could draw kids in buy has lasting appeal for adults. I remember getting this on a bootleg VHS tape from my uncle with Dragon Slayer on before it, nice two pack. The Gremlin effects are superb and hilarious and despite them being little evil monsters, you end up rooting for them. It also has some pretty disturbing imagery for a film geared at little kids that was marketed as a Christmas, family, E.T. clone. (which it most certainly isn't) The violence (and Phoebe Cates' horrifying Santa story) pissed off so many parents that this and Indiana Jones and the Temple of Doom are the double-handed reasons for the PG-13 rating's existance! This figure is shipping out on Monday so it was nice knowing ya! 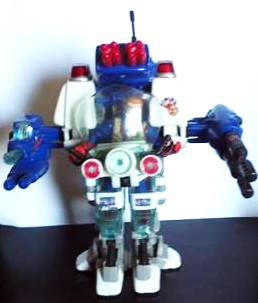 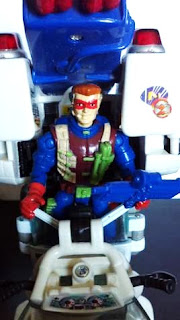 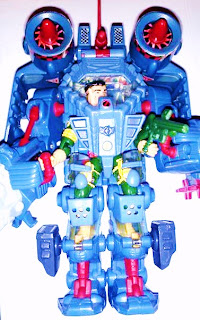 Next up is a figure/vehicle set from the Exo-Squad line produced from Playmates in 1992. This one of the police E-Frame Mech with Shawn Napier driver figure above and with Arial Attack E-Frame with commander J.T. Marsh below.  This line was great. It had so many details and accessories and the molds and articulation was amazing. All of the sets came with a Frame of various size and a figure. Some came bigger like aircraft, tanks...some came with smaller stuff like rocket packs and standards came with mech suits called E-Frames. This was an extension of the Japanese Robotech line that carried into the states in various forms. Reminds me a little of the Transformers Macross Jetfire/Valkyrie figure Japan/US conversions. Each frame came with a little plastic crystal shard to power the suite, firing missiles or projectiles, action features on the suit itself, full articulation and moving parts to lock the figure in place as well as a mind-jack uplink cable that connects the figures head. The figure also was filly articulation in the manner of a GI Joe figure and included a weapon set of their own! Talk about fully loaded toys! The cartoon was on at random times so I only caught a few episodes but I remember them being really well animated and well written. I had this guy and JT Marsh (the commander) and got them both from K-Mart (thanks mom) but never got any more figures... I usually put them in with my Joes and just used them as future soldiers. If you can find these in complete form which is rare, pick them up there are a great toy line! 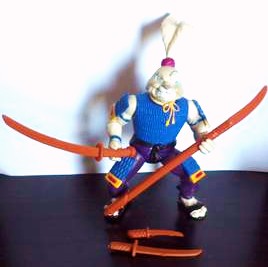 Last up is my absolute favorite figure from Playmates Teenage Mutant Ninja Turtle Line, Usagi Yojimbo "bodyguard rabbit".  Originally released as his own creation by Stan Sakai and 1987 comic series and gradually picked up into the animated series based comics through crossovers and featured on the animated series as a close companion to Leonardo, Usagi was just classic cool from top to bottom.  I love this figure, from the paint, expression, stance, accessories.  He is just a perfect action figure and a crowning achievement from Playmates Toys.  Pretty much anything that they produced was gold in the 90's.  They really did a great job translating animated properties into toys.  Their Toxic Crusaders toys and Dick Tracy figures  were superb as well all the way to the super colorful packaging and box art.   I plan to do more Turtles reviews and highlights of items I have since sold.  I tell you this, no matter what, Usagi isn't going anywhere.
Posted by Mr. R at 7:00 AM