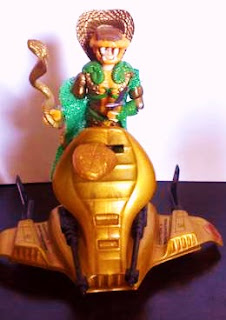 I never was a fan of the whole Serpentor character in the G.I. Joe cartoon... he kind of heralded into the beginning of the end of good vintage Joe.  It's not so much him, Cobra Commander needed a good foil to put him in his place besides Zartan and Destro but Serpentor just seemed so pissy all the time.  Kind of like an abusive husband and wife (ergo, Starscream and Megatron, Krang and Shredder, Skelator and Beastman...wow, pretty common theme for villains)  I really liked the initial idea behind him of Dr. Mindbender combing the tombs of the leaders of history and using their DNA sequences to create a super-commander and "Arise, Serpentor, Arise!" is the possibly one of the best sets of episodes in the whole animated series.

I just found his character pretty useless; he was always screaming at people, he never has any real plans, Cobra's top people all have this unfounded respect for him.  Say what you will about Cobra Commander but despite his shitty plans, he is always coming up with new ones.  Also, the movie undoes any originality of his creation by making it Golobulus (worst villain ever) who used a psychic bug to motivate Mindbender to have such a brilliant (ridiculous) idea.  Props to him for nailing Duke in the heart with his viper staff, too bad Duke lived. 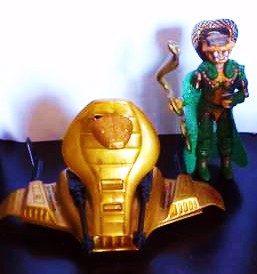 So beyond my feelings on animated Serpentor, that is inconsequential because I absolutely LOVE the toy version of him.  He originally came in a vehicle/figure pack from Hasbro in 1986 retailing for $4.20 (wow...so cheap), the set was available for 2 years and then was available for mail-order from Hasbro Direct in 1988.  It is a wonderful piece that translates amazingly well from his animated counterpart. 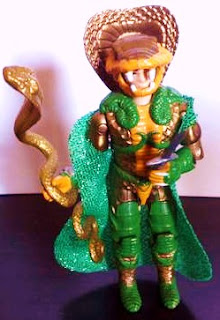 He was one of the first Joe figures I ever received and literally it took me from age 6 to yesterday to complete this guy!  He was one of the figures my Uncle Brian let me pick out of his Joe box, I remember not knowing anything about GI Joe at the time but loving how he looked and the figure head inside the snake mouth and the gold and green scale armor and the metallic green cape.  He was absolutely mindblowing!  However, there was no vehicle or accessories.    Eventually I snagged the vehicle shell two years later from one of my dad's work friends older sons who didn't want it anymore without any add-on pieces (thrusters, blasters, snake head)... I got the gold snake accessory by chance when someone left it at my house around the two years after that.  All of it went into storage up until this year where his cape was absolutely destroyed.  I then started rebuilding him and he actually was a  major motivator behind me rebuilding my whole Joe collection! 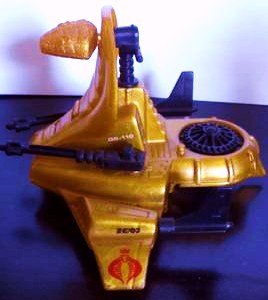 Found the Royal Cobra sticker on the side of the vehicle in a box of legos (weird) and glued it in place...Step one.  Got the fins and blasters for 5.00 as a lot from an ebay seller, Step two.  Got his dagger (the correct silver one)... I had him for the longest time with a Range Viper black knife by accident...thanks Whobit.com for clearing that up, step three. :)  Just got the snake head piece for the front last month for 3.00 (step four) and yesterday his replacement cape (step five) for 2.80 arrived in the mail and he is a beaut'!  Literally 24 years in the making to get the whole package. 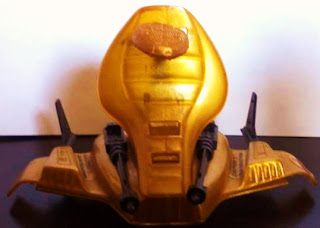 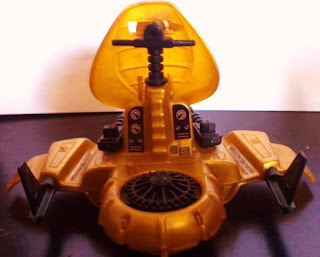 Relatively he's a kind of common figure but I don't care, he's pretty much a crowning achievement of a perfect sculpt and amazing accessories that stands a test of time and really shows Hasbro and hoe 80's toy makers in general where at the absolute pinnacle of achievement.  The vehicle is a spot on rendition of the air chariot from the cartoon and has a ton of extra (easily lost) parts like a movable handle bars, a two piece gold snake hear, a rotating exhaust fan on the pack, great decals and is sculpted in metallic gold and flat black.  I already gave a brief description behind the figure but I'll say again he is a really well sculpted figure with a perfect snake motif behind him with snake head wrist guards with little touches of while on the fangs covering his hands, the intercrossing of snake tails on his legs, his helmet and cowl are nice touches too as well as the two snakes he has on his shoulders.  Bravo Hasbro!