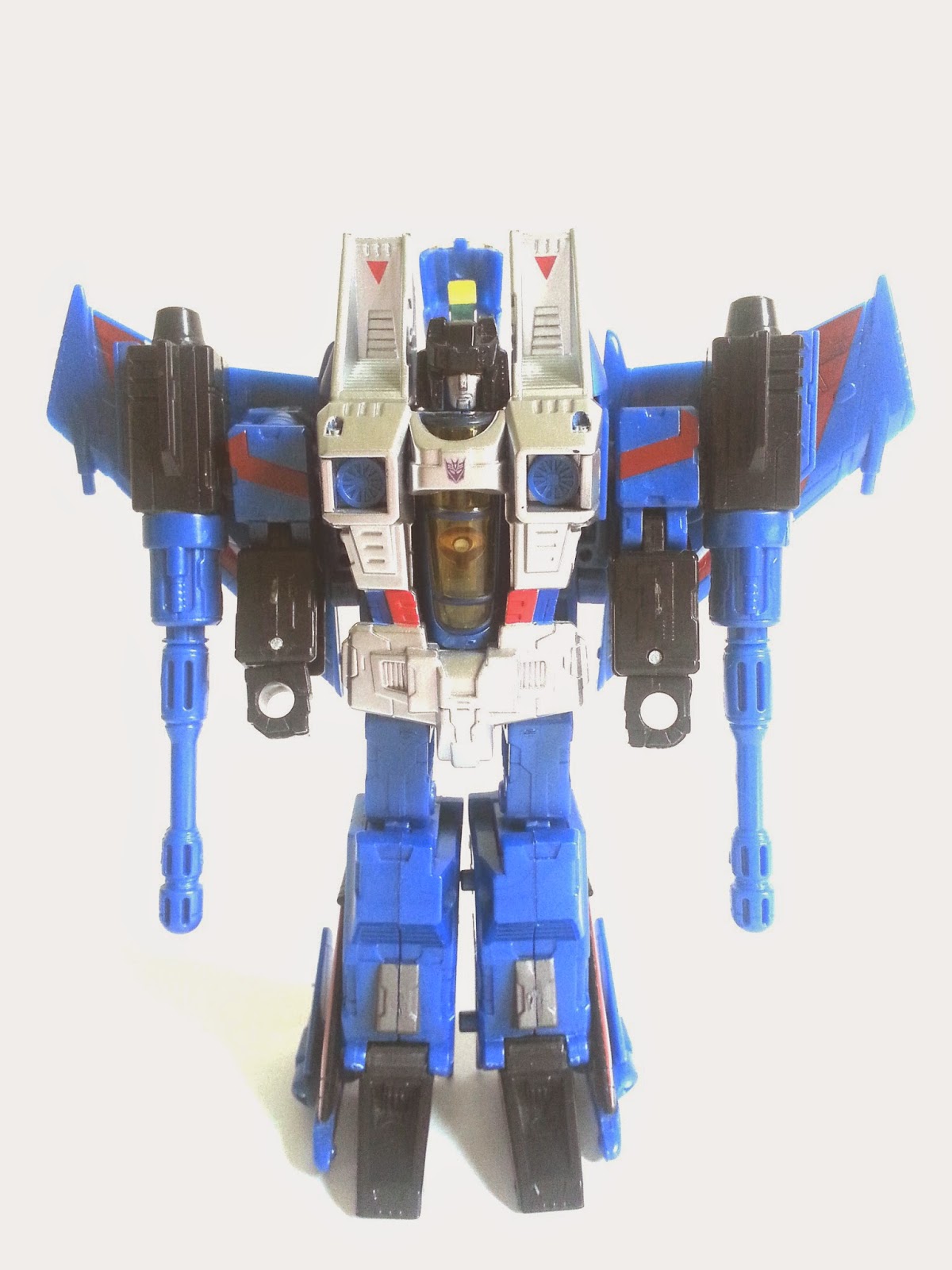 Up for review is the Transformers Classics reboot Thundercracker.  He is an all around update to the awesome G1 seeker for Starscream's original jet squadron and my personal favorite of the original jets.  He is truly a sight to see.

This is a perfect update to an already great and iconic figure (whom I own but am yet to review...it's coming I swear).  He has updated articulation to all the right places, additional details, molding and anything you could find issue with seems to have been addressed and fixed from design, to transformation to paint application. 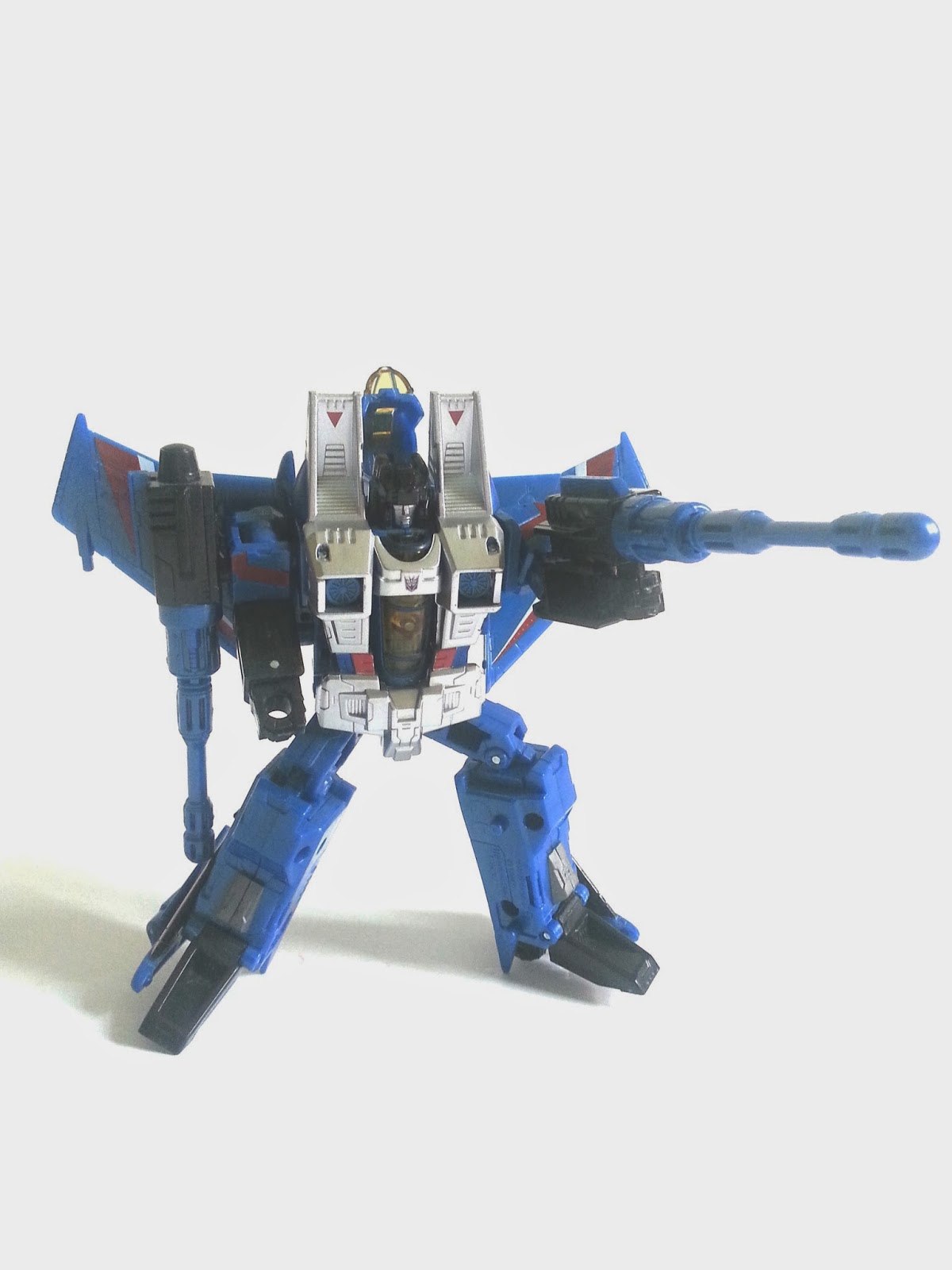 His alt-mode is a great representation of an F-15 Eagle and has perfected grooves, etching, engine ridges, exhaust fans, missiles and anything you could hope for.  He has a yellow/orange tinted opening cockpit and a painted on set of red and white stripes to give him a striking look over his vibrant blue paint job.  His nose has a rubberized black pointed tip and he has two firing missile pods that fit on the underside of his wings.  The Decepticon logo is nicely displayed on the overside of the wings as well. 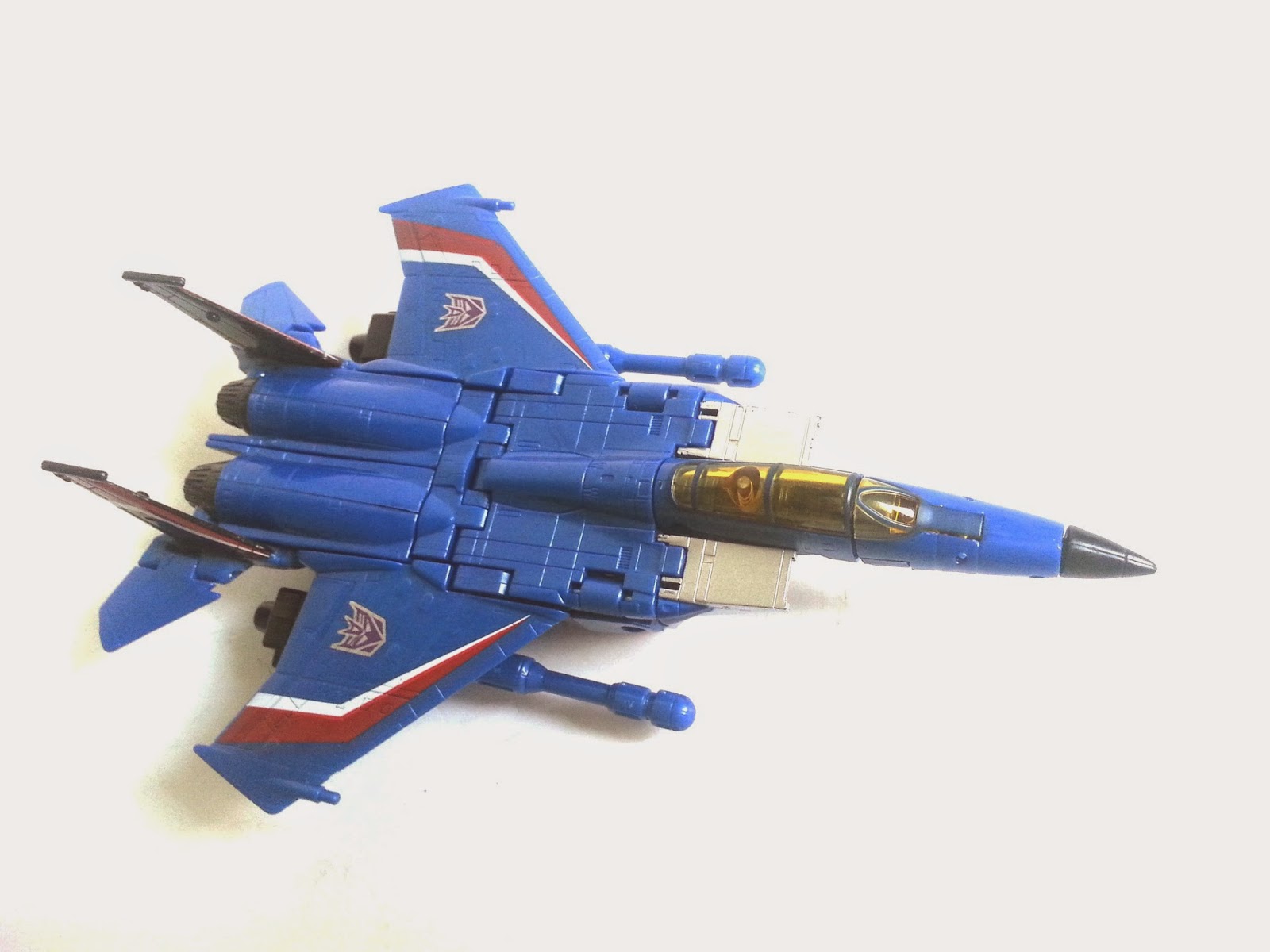 Transformation is smooth and fixed the nagging issue I had with the G1 rendering of having to physically take off his wings and stabilizers and reposition them between alt and bot modes.  Everything is connected and transitions into place nicely.  The only thing that comes off are the rocket launchers which can either be positioned on his forearms or in his hands as blasters to add some variety.  He has nice extended legs that bend at the knee and has pivoting arms with bendable elbows which add for some nice poses as shown. 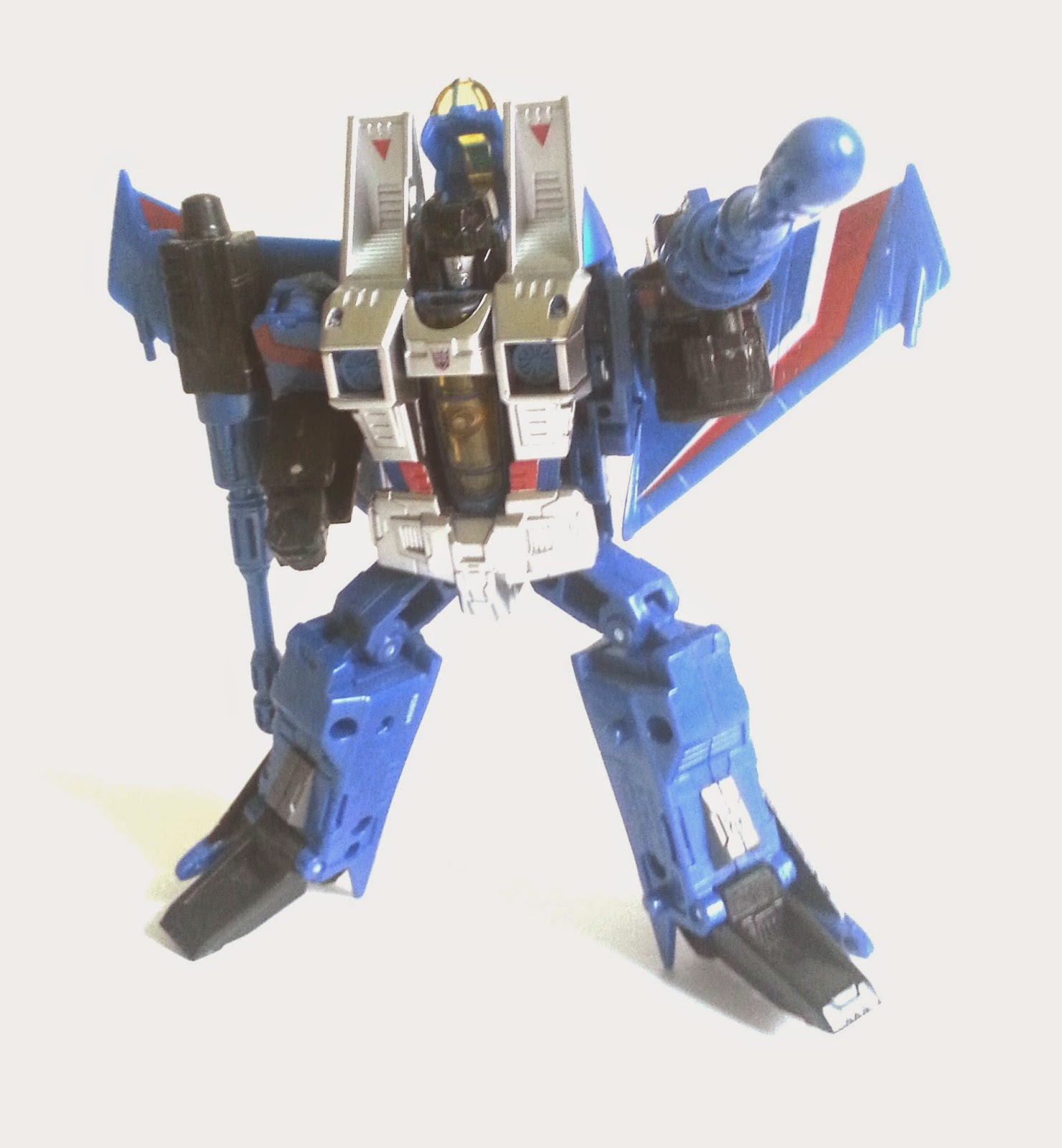 As a bot, he is amazing.  Beautiful face mold although his head doesn't move nor does he have light-piping.  He's got a nice paint scheme on the chest with two exhaust fans for breastplates which are a great touch.  They even included the two red triangles on his shoulder guards like the G1 model.  Articulation is very satisfactory and as I'm repeatedly talking about touches and paint on the wings and body, yes, it is all paint now.  No stickers anywhere and the application of the paint is welcome and extremely well placed. 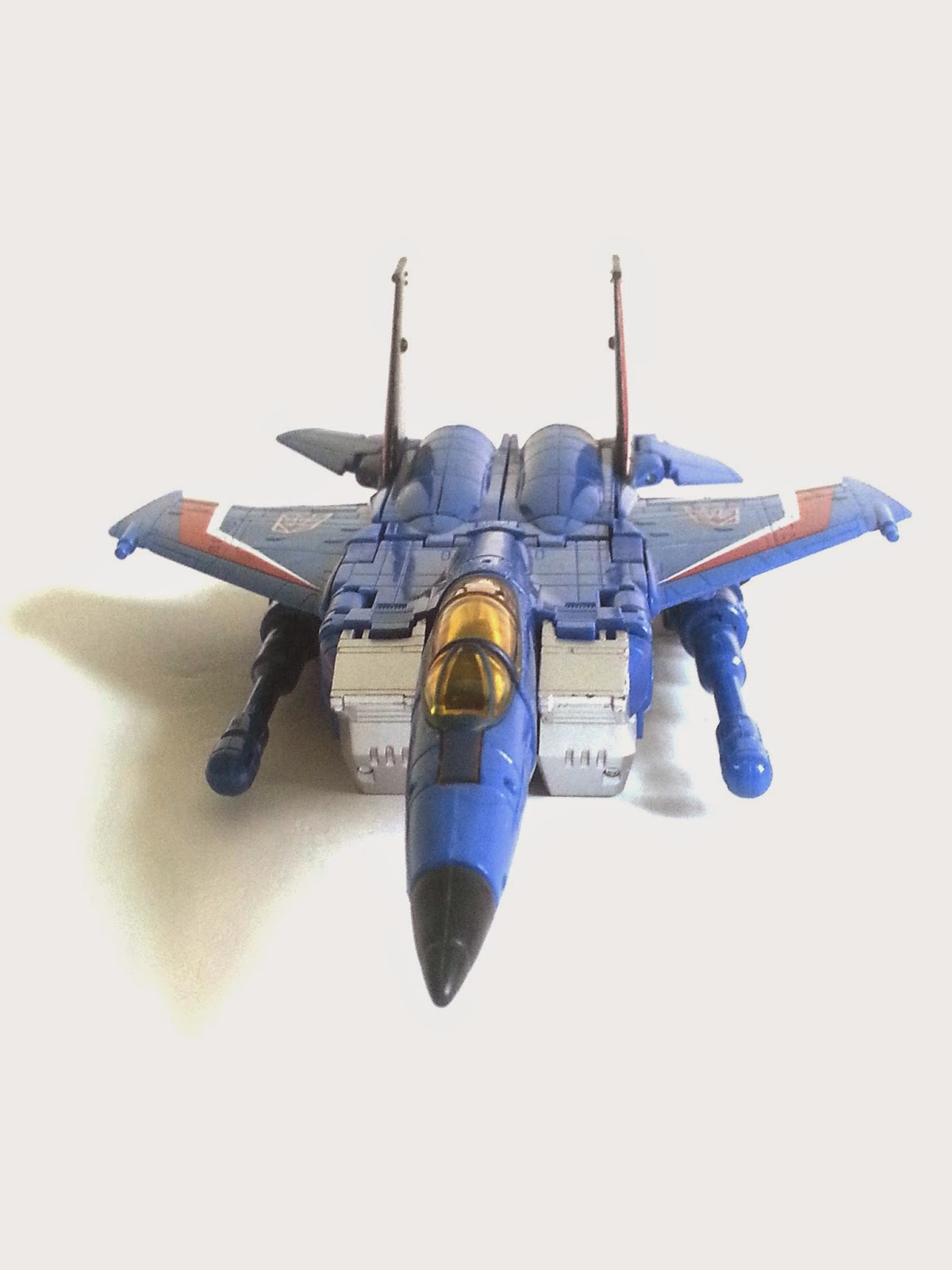 Presentation-wise, he's a slick update of one of the most popular original characters from the Transformers Universe.  If you can only decide on (or afford) one seeker, go with this guy.  He certainly will not disappoint and (next to Dirge) he seems to be one of the least expensive Classics you can still score.  Skywarp, on the other hand, is through the roof and Starscream...I dunno doesn't do it for me as an update like Thundercracker manages to do.
Posted by Mr. R at 8:37 PM