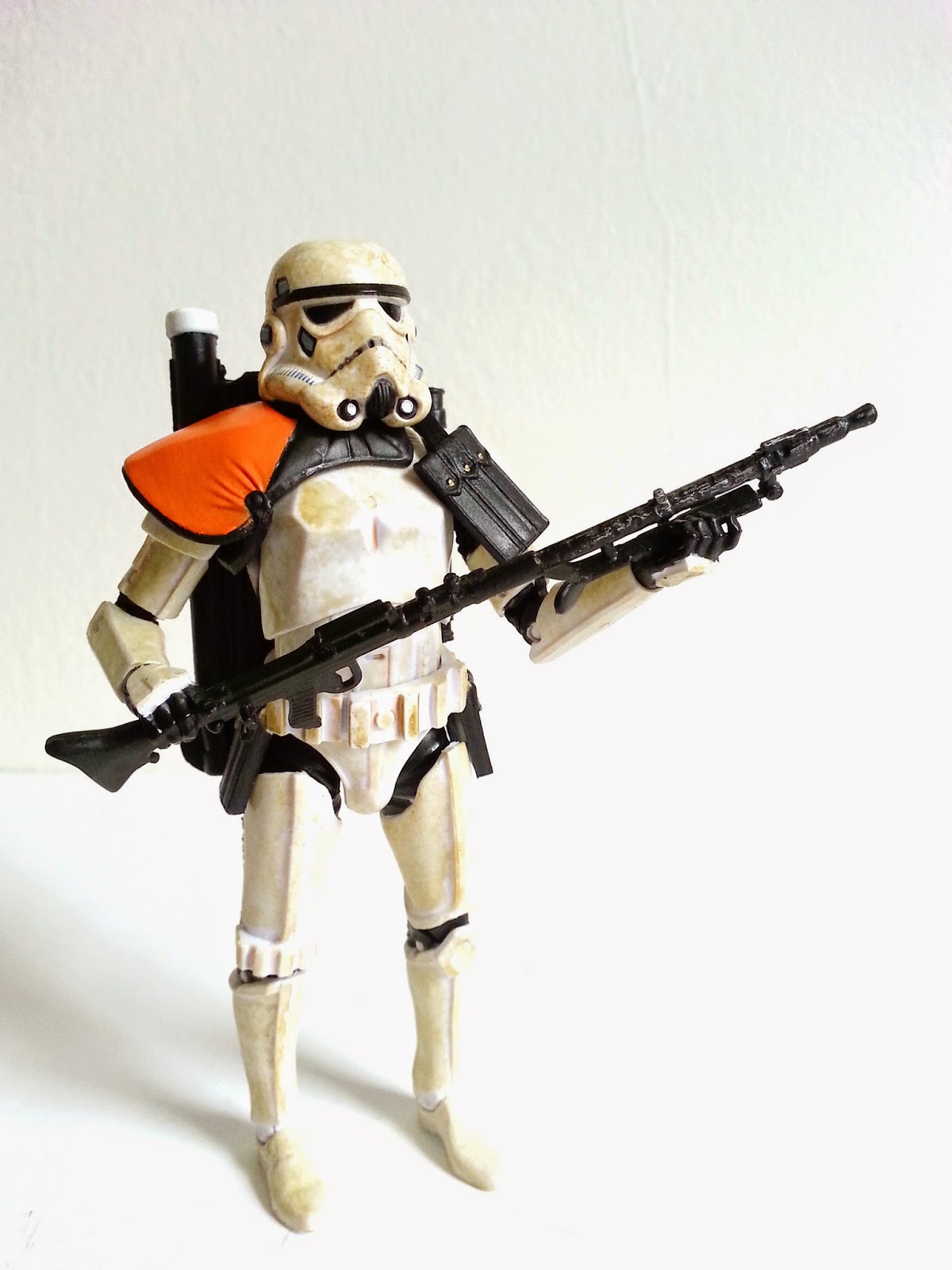 Going back two years for this guy who has been making his rounds through my shelves and storage.  This was from the very first run of the Fairly recent Star Wars black series 6" inch deluxe figures.  The Sandtrooper was THE figure to get and was nearly impossible to find at retailers.  He was notoriously missing from online sellers or going for nearly double the retail cost.  I myself found him at Target and only saw him one other time in the whole span.  He was one of four figures consisting of R2-D2, Luke in X-Wing gear and Darth Maul...a pretty random set of figures to start off a line but lets give it till wave 5/6 are out (if ever) and we have a nice cross section of both trilogies to look at.  Some of the upcoming stuff looks great and I very much like the focus on the OT but am surprised that there is yet to be a Grievous or New Hope Princess Leia...the Slave Leia choice just baffled my mind as these are extremely articulated figures and it doesn't work very well on a flesh clad mold...I know they cannot do Phicen but since that is they case, any clothed Leia would have worked better for me...(Apparently they are going to release a Ceremonial New Hope Leia in a future wave packed with a TIE pilot we will have to sell our souls to find on shelves) 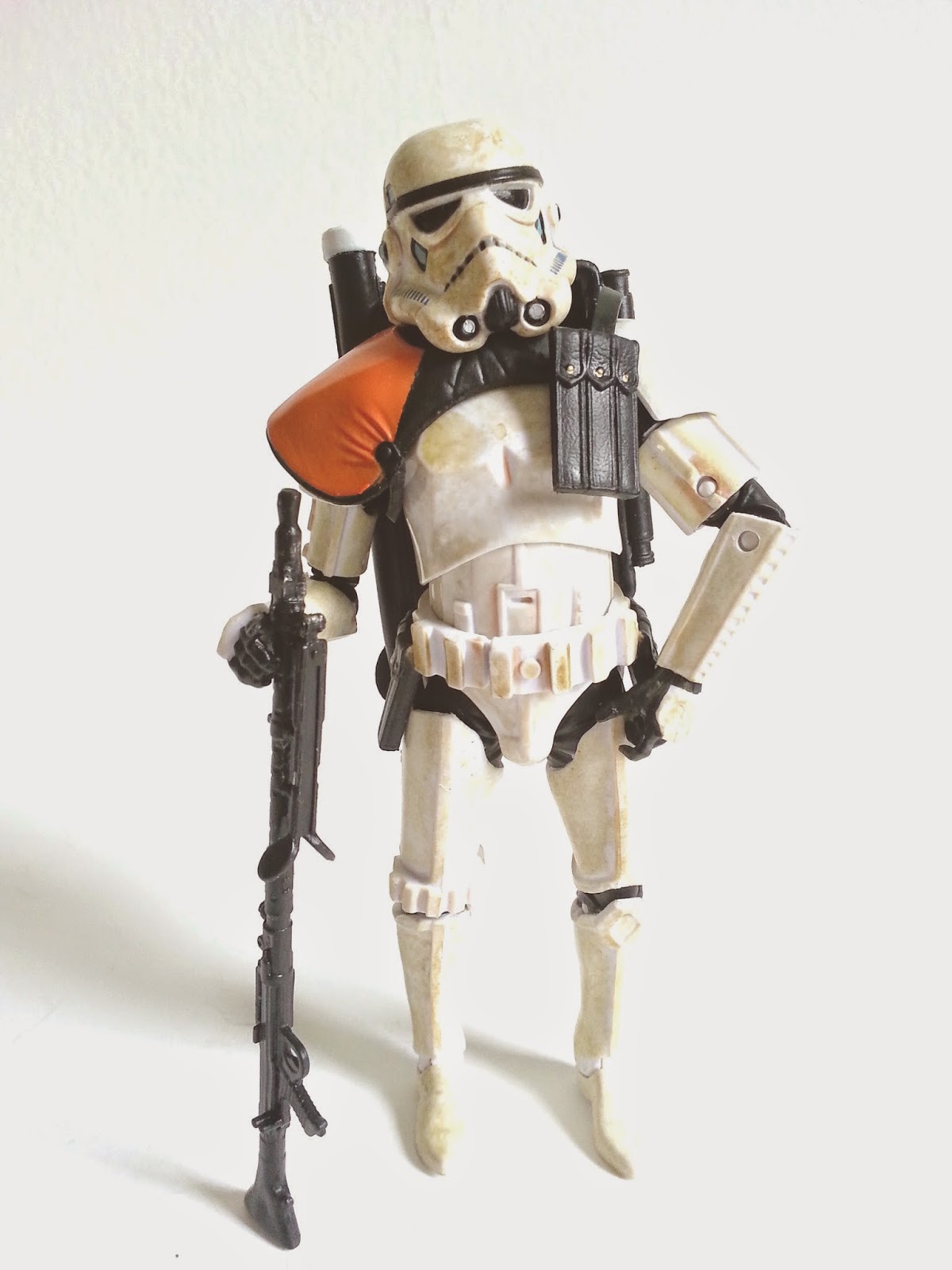 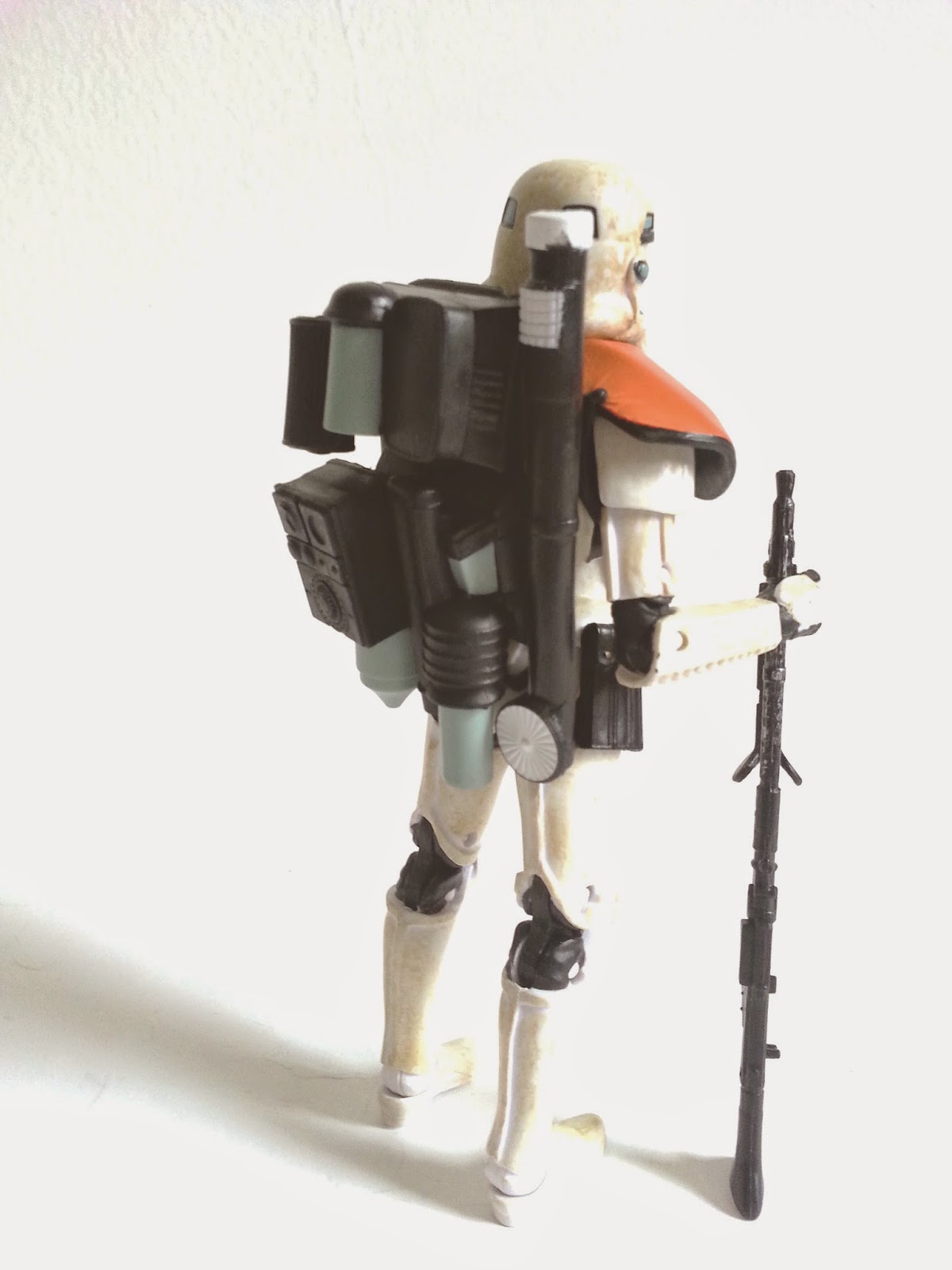 Anyway, here he is.  One of the first troopers from the Original Trilogy and he looks great.  They really did a great job nailing the specific identifying features that differentiate him from the normal Stormtrooper...the knee pad, the helmet paint, the belt. Everything is very accurate. The desert wear on him is convincing but not over the top just like the Scout Trooper and his extra blaster and rifles are nice.  There is really nothing I would add to this guy and am happy he didn't get a Scout Droid packed in with him although I would understand if special edition fans might be a bit bummed at the loss. 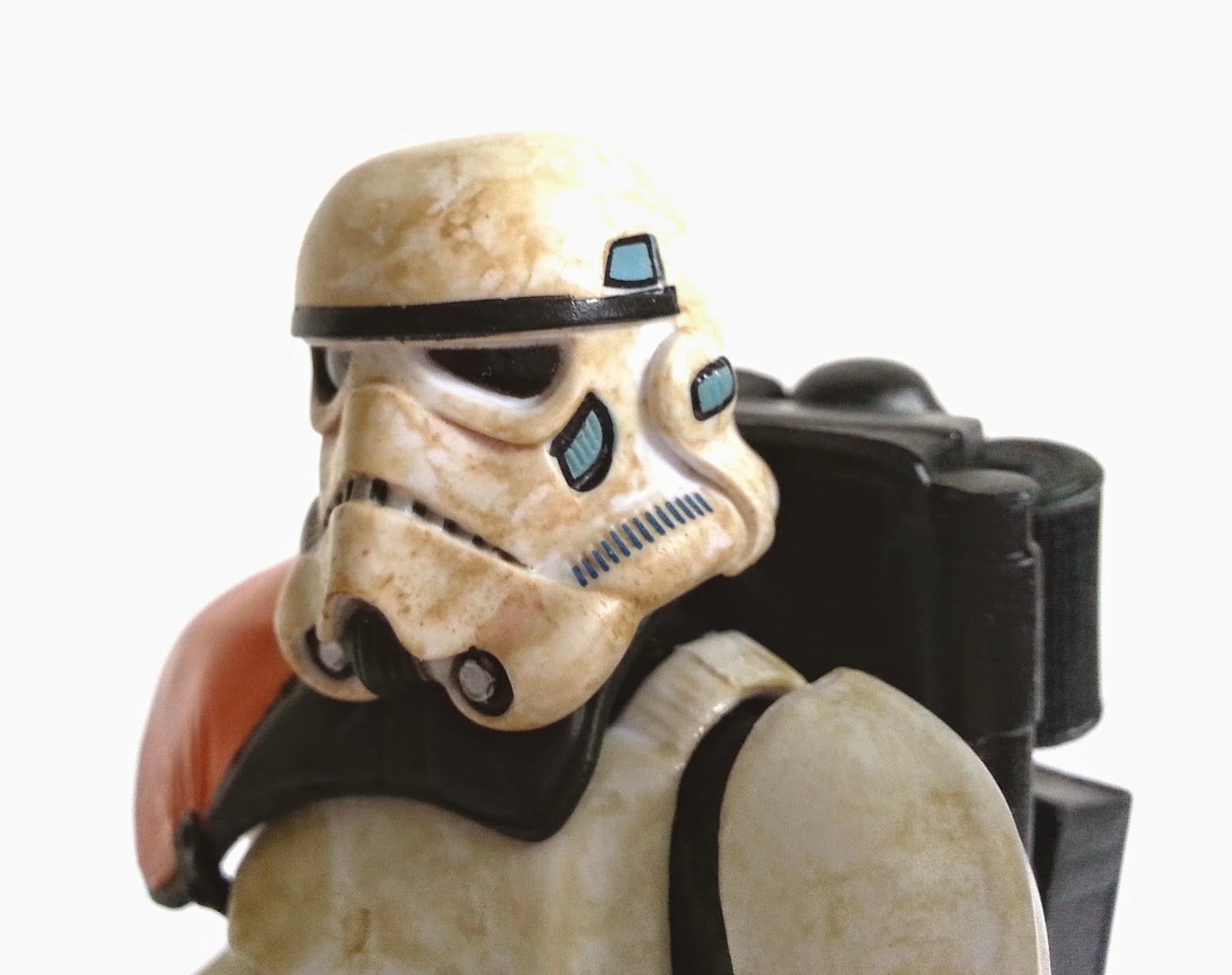 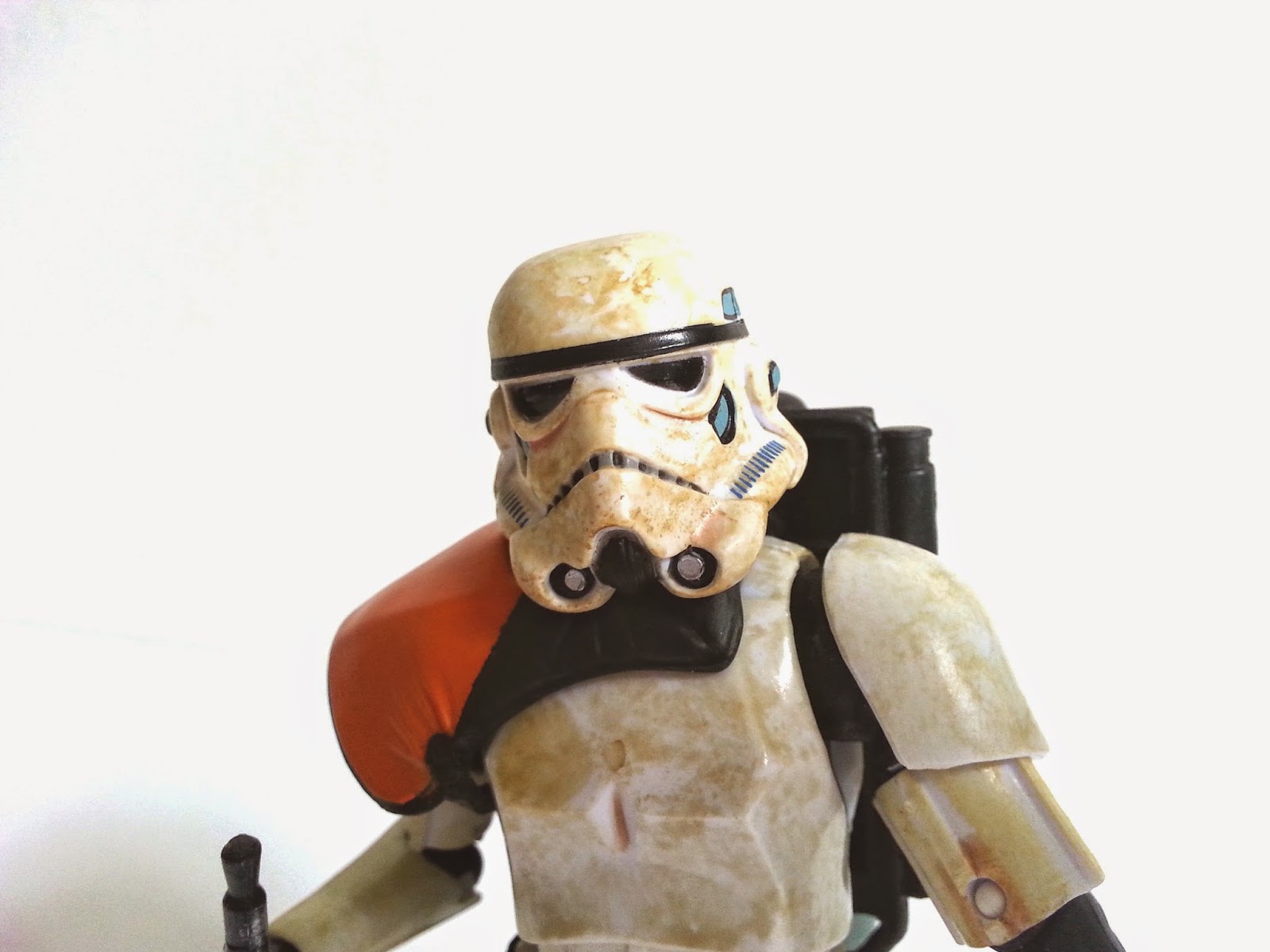 He stands well on his own and is pretty sturdy with a removable oxygen backpack and shoulder ammo pouch that attaches to the backpack.  His orange paulderon also can come off if you pop his head off.  His articulation is very nice and he can hold his rifle and weaponry in many nice various poses.  The paint is very nice with a cool sheen that shows through the dirt.  Something about this series does a great job emulating various textures.  Armor looks plastic-like, as does vinyl, cloth, rubber etc.  Gloss touches in all the right places and dirt and wear looks strikingly convincing.  In the world were Hot Toys and Revoltech take the very expensive cake, it's good to know Hasbro can and sometimes will step up the plate and make high quality yet still affordable merchandise. 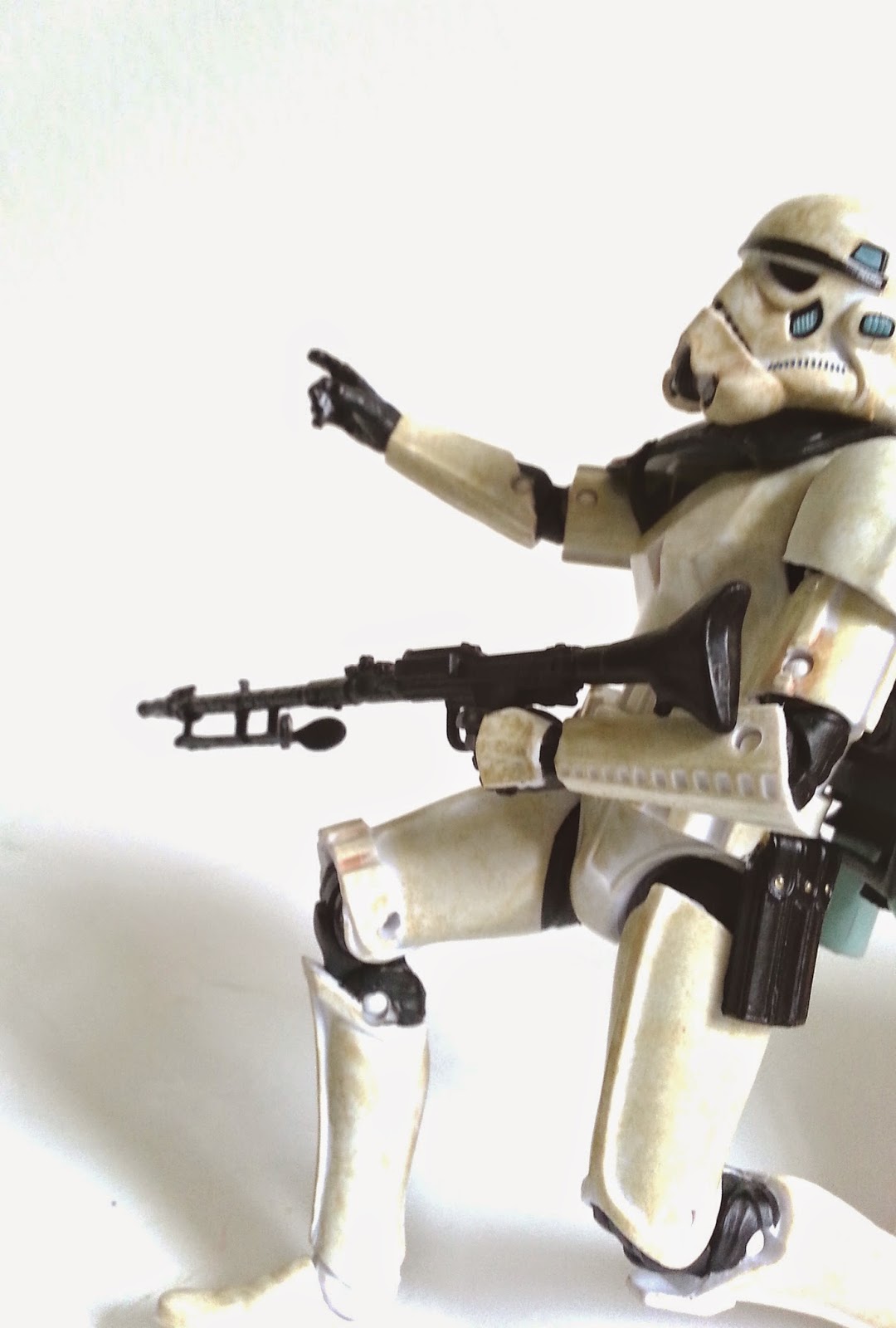 If you can still find him, go for it.  Otherwise a repaint of him with a black paulderon is right around the corner!