﻿
﻿
﻿
I think it's about time to cover another one of my more prominent pieces in my collection...Granted, it's no Fort Max, Technodrome or Terror Dome but this is pretty much as big as I can get both price and space wise and I'm quite content with it.  That's right, you asked for it and you shall receive: The G.I. Joe Tomahawk released by Hasbro for the 5th series of Joe toys.  This was an amazing mainstay for G.I. Joe collectors, fans and kids alike who loved the show.  It was used constantly in the comics and animated series, was a great parallel to the contemporary, real-world CH-46 Sea Knight or CH-47 Chinook and was packed with great features. 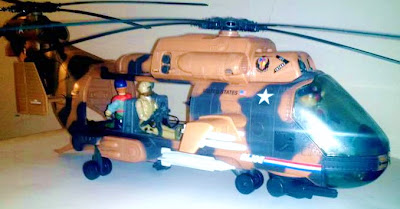 This was a greatly sought after toy among my friends as a kid as most of us missed the classic Joe boat and didn't get into this collection until the late 80's and early 90's and most of our toys came from older brothers, uncles and cousins who have since moved on.  I actually remember one brother of a friend of mine having this in a toy/junk box in shambles with no window, guns, seats or blades.  Just a hollowed out shell of a once-great toy.  By the way, this toy was a one-time-only entry into the Joe archives.  It came out in 86 and was off the shelves by 88 (Probably at a discounted price...of the original 12.99 price tag...how did we not all automatically have this toy??? sigh, I dunno.)  There was never a known remake of this toy in any capacity...no Sky Patrol, no Tiger Force, just the original and that was it.

This toy just shines attention to detail with expert modeling, amazing detail and hyper-realistic design.  Honestly, it looks as detailed as a 1:32 scale Tamiya model.  It feels as if it could actually fly if it were built to scale.  It has three moving rotors (2 top and one tail) that all work with 5 removable blades on each top rotor.  It has nicely made exhaust ports on the tale and front rotor motor casing that has its' own separate pieces separately inserted that aren't a cheaply molded single piece of plastic.  This adds to what makes the toy great.  In addition, it has a opening cargo door in the back and wind-up tow rope for rescue/hauling missions, a rotating 20mm mini gun and targeting camera on the bottom of the nose, movable pilot and co-pilot sticks, 5 seats for passengers, 2 door guns, 2 side missile pods with 3 small white freefall "dumb" bombs each and 2 heavy duty air-to-ground under the side access doors.  Aesthetically it includes 2 removable rear stabilizers, and sturdy landing gear.  This piece brings the kitchen sink for authenticity and Hasbro didn't miss one single beat in making a spot on likeness to the animated counterpart.

The paint scheme is completely dark grey and desert tan with solid grey pieces for the interior, engines and propellers while the body has a sprayed on camo pattern.  Simple but says it.  No garish neon vomit inducing nightmares, no boring solid colors...a perfect, realistic, paint scheme. In addition to great features, painting and molding, this toy comes packed with its own Joe pilot code named: Lift-Ticket.   He's a simple enough figure and one of the first I ever got long before finding the chopper...22 years to be exact.   He has a nice flight helmet, molded on pistol and holster, flight vest, straps and good painting, I just think he has a goofy kinda look on the face but not as bad as the toothy smile they molded on the Conquest X-30 pilot, Slipstream.  He came with only one accessory which often is the bane to Tomahawk collectors who try to make this item complete.  It's a famously hard to find "mic" piece that hooks into his helmet.  Good luck finding and not paying wayyyyy too much for it.﻿﻿

So that sums up my 2nd favorite item in my Joe collection...the first will be coming soon, I promise.  But besides that, I want to let you know this wasn't nearly as nice looking when I scored it (for 30 dollars total btw)...After picking up 2 top blades and 2 white missiles and 1 seat, I had the vehicle together.  It needed some deep cleaning from being in a smoker's house but I got it back to it's original luster with dish soap and floor wax for the canopy. The labels on it were repros from cobrastickers.com (who make amazing, spot-on, high quality, repro labels) and I used YoJoe.com  and Hisstank.com to figure out where each of the tiny, well designed decals went.  THEN, I had the lovely vehicle you see and I love.  Hopefully, you think it looks as good as I do.
Posted by Mr. R at 9:20 PM