When the name "Cobra" comes up, a few faces instantly pop into mind.  Destro, Baroness, Storm-Shadow, Zartan or Cobra Commander himself.  When it comes to Cobra's vehicles, besides the HISS tank, an instant visual of a certain helicopter comes right up.  The one-manned Fully Armed Negator Gyrocopter or FANG for short, was the staple Cobra air-assault vehicle pre-dating the Rattler by a year in the toy line.  You probably would be hard pressed to watch any early episode without a F.A.N.G. making an appearance or two as they served as basic cannon-fodder for the superior armored and maneuverable Dragonfly Chopper on the Joe side. 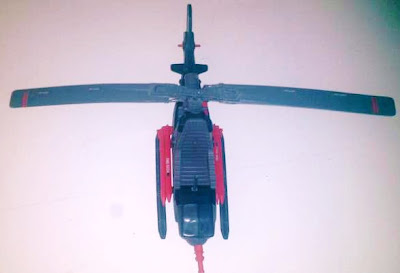 This hovering mass-produced menace hit the toy shelves in 1983 at a measly 3.18 retail price!  I swear, if I wasn't 1 year old, I'd have a fleet of these things!  Often you could have your blue clad troopers or Cobra Commander or Major Bludd flying these.  (I especially remember Bludd flying around in a FANG constantly) and it had a very neat backpack hook mold into the seat to securely fit your Joe figure into place as you banked and soared this vehicle through the air. 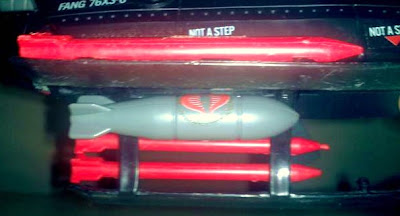 It was basic as basic could be with grey and black molding however the detailing wasn't lost on the panelling, the engine and detachable rotor blades.  It included 4 nice long missiles which attached to the landing racks and had one big Cobra inscribed Bomb on the underbelly.  The steering stick moved but seemed really stiff so I could imagine being an easily broken piece along with the red cage housing the rear engine which, if you look on the aftermarket, is almost always missing on loose versions of this vehicle.  Even mine has a partially glued on on the backside.  Interestingly enough, this vehicle besides it's later models of Fang II, Fang III and 2008 remake, it was also originally molded as a Joe Vehicle in UK called the SAS Hawk along with included pilot "Blades" (a repaint of Tripwire) under the Palitoy lable, Brazil's Estrella line released it as a Joe vehicle called Helicóptero De Ataque and Inda's Funskool line released their own F.A.N.G. as well as a blue version of it for the Rescue Squad line. simply titled "Helicopter". 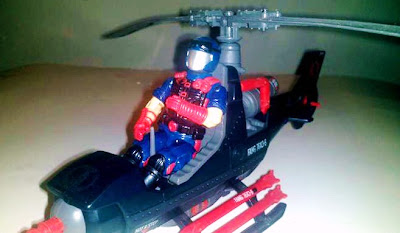 All in all, it's a fine vehicle and a must-have for any Cobra fan.  It's compact, simple and says it so even if you aren't the hugest Joe fan and just want a few odds and ends or a single piece for your desk or shelf, it can fit nicely but still hold its own in the presence department.  It sells relatively cheap on the aftermarket so give it a go if you see it around.
Posted by Mr. R at 9:20 PM