I finally amassed and unpacked and shot some photos of these three great K-Mart finds!  I just got around to grabbing the Scout Walker this Sunday and I managed to find the two K-Mart exclusive Endor Return of the Jedi "Special Action Figure Sets" consisting of the Ewok Scouts and the Endor AT-ST Crew.  I must say, K-Mart really surprised me by coming through this well especially in a time when finding newer, worth buying Star Wars material was in sharp decline. 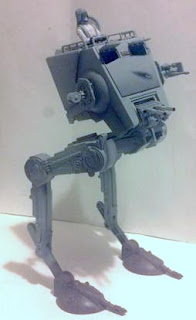 All three of these wonderful Original Trilogy Endor-centric items are must haves for any fan of the Original Trilogy.  However not everything is a home run for me and I will explain. 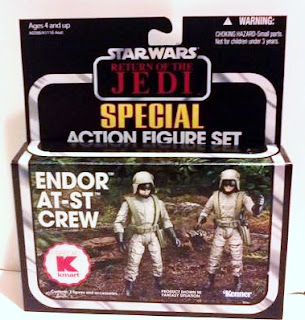 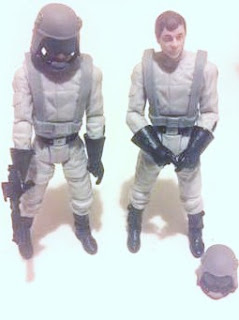 First, I'll take on the two figure sets.  The AT-ST crew come in nicely designed miniature boxes with the figures prominently displayed in a forest setting, very similar to the old Kenner displays for vehicles in included collector's booklets.  However I would have liked a throwback picture from the vintage 1982/3 cardback for the driver or any one of the promotional shots of the driver and gunner from the movie to drive home the difference between the two nearly identical figures.  Another thing I noticed upon removing the set from the box was that the harnesses the drivers actually have and the ones depicted on the box are different because the pack-in figures do not have holsters strapped to their included harnesses.  I'm up in the air about how I feel because honestly, I didn't care for the holster look and kind of liked them more how they came holster-free but it was still a discrepancy on the box to point out if you buy this set. 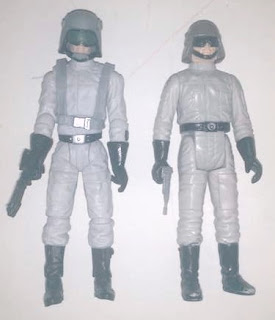 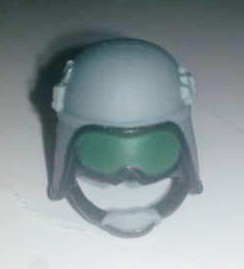 For the figures themselves, there is relatively very little difference between them with identical body sculpts, accessories and helmets with the only discerning quality being slight differences in the facial molds.  No biggie, they are an army builder and you will need two if you buy the AT-ST Walker which I did.   They also came with pack in standard Imperial blasters which wouldn't have been my gun of choice as I'd prefer the smaller pistol the original Scout Walker Driver had in the Kenner series *shown above on the right* and what you see the pilot holding in the movie when Leia shoots him.   Articulation wise, they are very hard to stand and have very awkward bodies...I just don't know how TVC can nail the stormtroopers but have such a difficult time with the officers and anyone wearing a jumpsuit.   Paint and details are fine with nice touches on the helmet (which is removable with goggles attached *shown above*, yay!)  and the sculpts are very high quality with mimicked cloth folds in the uniform that work well along a separately sculpted harness as shown in the movie and with slightly glossy gloves and boots. 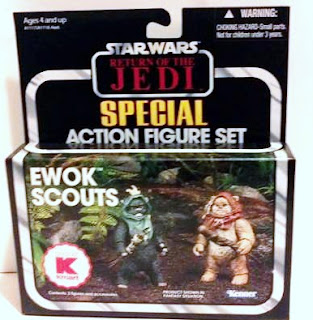 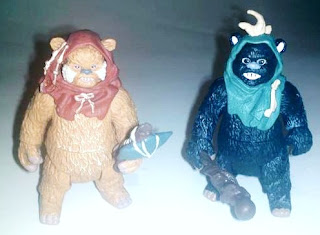 For the Ewoks, I don't have nearly as many issues... For the packaging, my same sentiments preferring a still grab on the back of the box or somewhere. (You will notice they did this on the AT-ST Walker which I will point out)   From the box, it was nice to learn that these two hijacker ewoks were named Wunka (the dark one) and Widdle Warrick (the light one).  They have great application of detailed paint on their fur patterns, their hoods and their weapons (a nice makeshift axe and club) and their articulation and stability is way better than the walker drivers.  I love how even their toes have nice little touches as with the Wicket and Logray Vintage Collection figures.  I might have rathered a little more subtleness on their facial sculpts because they are toothy on a level of borderline creepiness but I even went back and watched their part in the movie and they are making the faces their figures have pretty much the whole time so if Hasbro was looking for "movie accurate", they got it. 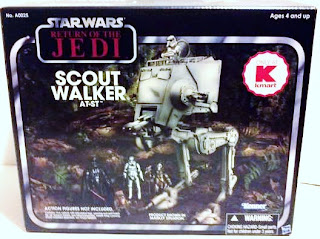 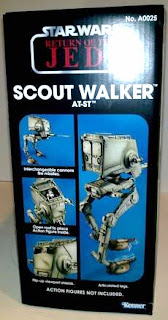 Now onto the star of the show.  The Imperial All Terrain Scout Transport (AT-ST) "Scout Walker".   I loved this vehicle ever since my uncle let me borrow his old one to make my own battle of Endor film with my toys as a very young kid.  (It was adorable...I used potted plants for Endor, used my beat up X-Wing and Falcon for the space scenes and played all the parts for the throne room...with no breaks between parts...holy hell)   Anyyyyyway......How I previously said the new Movie Heroes Speeder Bike fixed all the old problems?  Well the same can be said of this beauty.  I will say it's a complete repack of the older Hoth version as well as the Wal-Mart exclusive sans the driver packed into the Wal-Mart one.  The difference here is the nice Vintage Packaging which is a total throwback to the old school Kenner line.  It has a nice action figure diorama scene on the front, features on the back and a great movie still shot on the bottom of the box.  A+ package design, Hasbro! 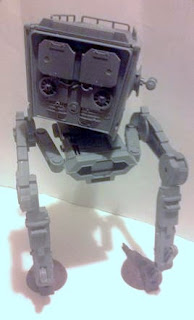 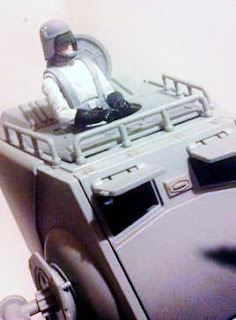 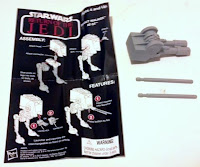 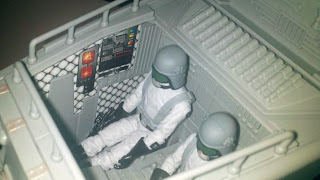 I was hesitant about committing to any bigger vehicles but this was one I had to do especially with the Driver and Ewok sets I grabbed.  The legs are spot on and well articulated.  There's a railing on the roof which opens completely or through the hatch only.  The driver section seats two (nice) and has some pretty well detailed decals inside.  The "eye" flap blast-shields open and shut which is my favorite feature and the guns are all nailed with total accuracy.  There is an additional included "action feature" double firing chin gun which (thank God) can be taken off easily and replaced with a movie accurate gun for collectors like myself.  Paint-wise, it looks great with natural looking battle damage, mud on the feet and a super attention-to-detail sculpt in the lets, head and rear engine/fan compartments.  All in all, great vehicle.  My only complaint is how it stands.  It is very difficult to stand in many positions and pretty much the way I'm showing it, is they way you have to keep him due to the legs being so fragile and the head being so top-heavy. Despite my gripes, I love all of these items and really am glad to have modern renditions of such nice old-school items. 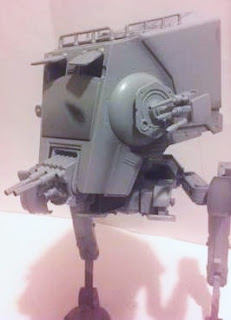