Got home yesterday from work to the lovely sight of  a Bigbadtoystore box sitting on the porch.  I went in on a joint order with my buddy (whose G1 and He-man collection I featured in my Skywarp review) who got the commemorative Seacon reissue set, I grabbed two of the new Beast Saga figures and a used G1 Onslaught Figure.  I had my eye on the Takara edition of revitalizing the Battle Beast line.  It's actually been a good year for these little guys as numerous companies have been throwing their hats in the ring; be it Takara, Diamond Select or Glyos. I picked out the two current releases who by far looked the most appealing. 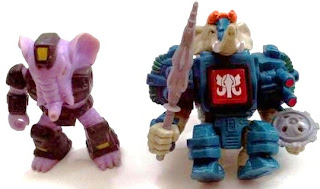 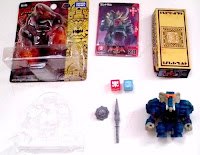 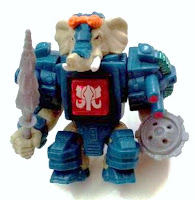 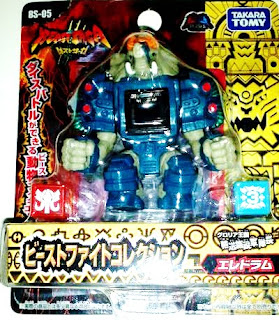 The elephant  (BS05 - Eredoramu) and giraffe (BS06 - Long Tsurafu) were my two favorites so they were the ones I went with. These look like the contemporary upgrades to the original Battle Beasts "Sledgehammer Elephant" and "Rubber-neck Giraffe" respectively.   I have been seeing less than enthralling reviews of this new line over the past few weeks and I just don't see what the issue is. I really like everything about these guys from the realistic sculpts to the intricate artwork on the packaging. They come with a super detailed card and a pair of red and blue dice which can be launched from their chests to play into the more gaming side of the figures and franchise.   They have expertly designed little bone-like animal icons on the dice along with a set of number values to play the card game. Not my cup of tea but I think the chest piece designs work in lieu of the original hologram elemental rub-signs as there is translucence and luminescence which results giving a cool effect.   They come included with a edged weapon and shield (a bit too small in my taste) but it was refreshing to see the weapons received individual unique sculpts. 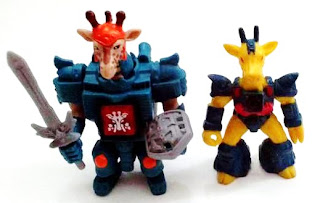 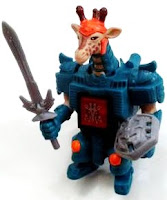 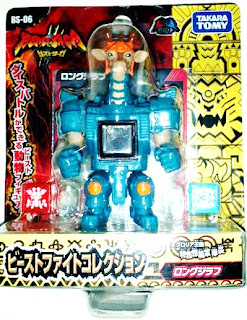 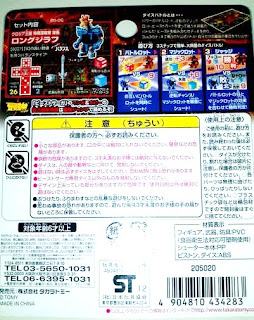 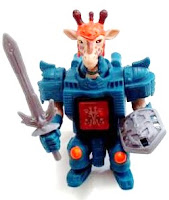 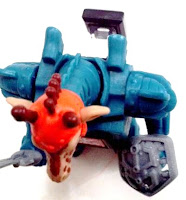 The paint detailing on the specific parts of these figures is a major part where the care shows through.  You can really see this on the skin patterns of the giraffe and on the elephant tusks and the cannons on his armor however I would have liked to see a more weathered look them.  One thing many reviewers and fans alike pointed out beyond the lack of rub signs was the lack of the monochromatic eyes as these figures have pupiled eyes.  This doesn't seem like all that big a deal for me although I noticed the Diamond Select Battle Beasts stayed true on the eyes.  Nothing makes an anthropomorphic animal warrior look ten times more badass than white slit eyes...I mean compare the Eastman Ninja Turtles to the animates...no question, right?  Another difference is the size because compared to the originals, they are bigger and bulkier with the added armor and newly articulated (and interchangeable) legs.  This makes little difference in pose-ability because they pretty much can just stand up straight. Overall: They are sweet new editions to an awesome 80's franchise and I cannot wait to grab the Alligator, Turtle, Kangaroo and Rabbit (to name a few) when theyroll out. 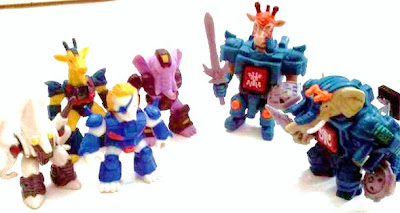 Speaking of the Diamond Select figures due out in what I'm hearing now is January of 2013.  I just saw some pretty impressive shots from the Battle Beasts facebook page and boy do they look a lot nicer than the SDCC peeks.   A shot of a new bat figure made it out and it is told he will be a TRU exclusive paired with a moose figure as yet unseen.  I know I made some less than flattering early impressions on this line but I gotta say, I'm throwing my hat behind them again.  The walrus, scorpion, snake, and hawk look pretty cool too especially not next to the human figures.   Also for anyone heading to NYCC for Saturday Sunday this weekend, Ulysses Farinas will be there to sign some Battle Beasts comic prints should anyone be interested.  (I went on his website and saw a cool as hell Cobra troopers print he's working on...love that fine, detailed, Geof Darrow style for any Rusty and Big Guy fans out there)  My buddy is heading there and (praying to God) might be able to snag me a signed print.