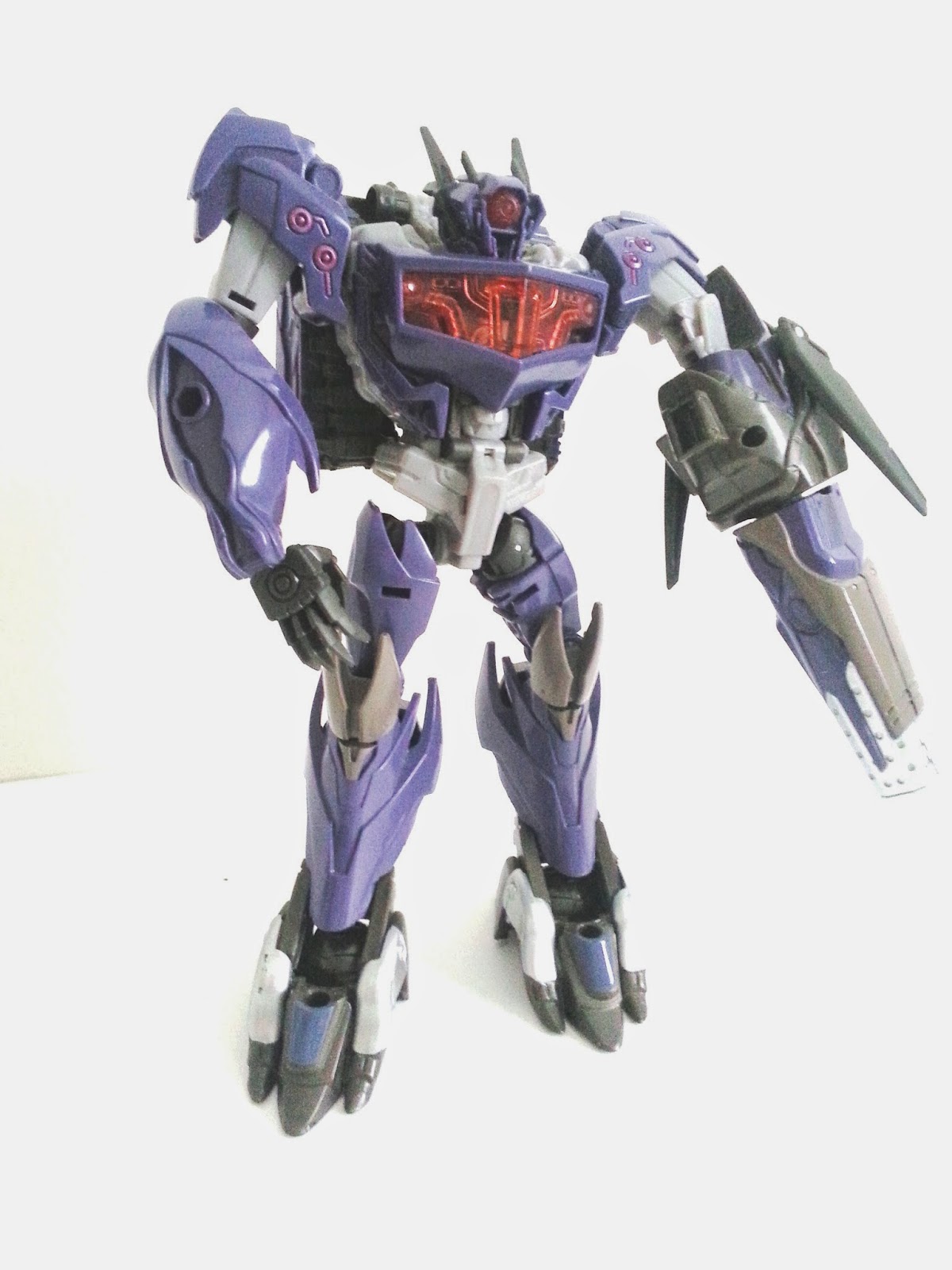 This'll be  a quickie.  I already said I recently started back up on some fairly modern Transformers (most stuff from the 2000's up to now.  One of the first figures that caught my eye through some stylish tumbler photos (honestly some of the toy photography on that feed is amazing) was this guy and I had to have him.  I managed to score him for 14 bucks compete with shipping which was a pretty nice deal.  This character has held a special place in my heart since my very first memories of toys as he and Jetfire were my first bots G1 I received for Christmas.  I loved his blaster alt mode and was deeply saddened when he went missing forever. I did get him back albeit through Chinese KO format but its all the same to me, he looks great and I had nothing bad to say about him in my previous review. 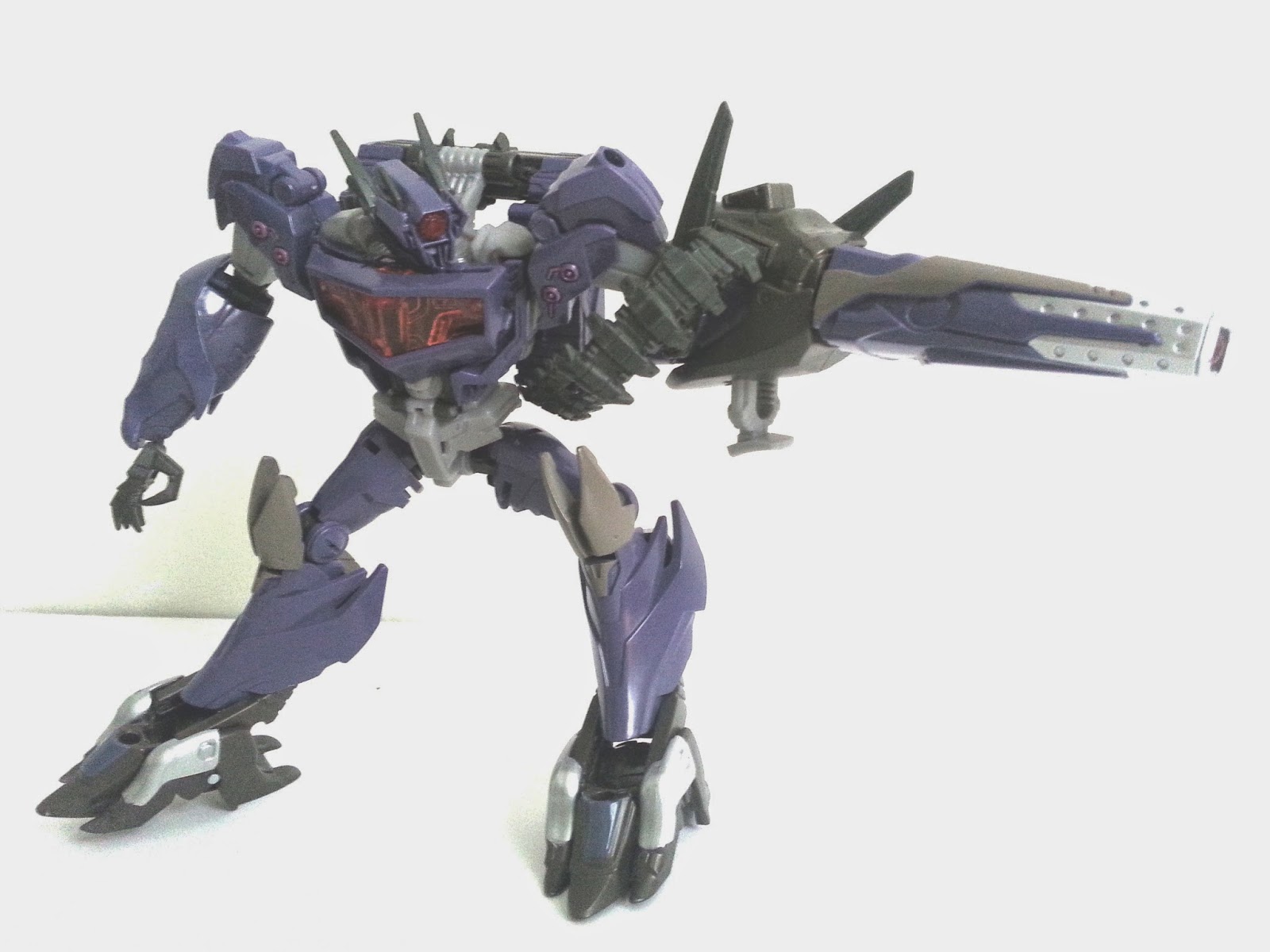 When his incarnation was featured in the Fall of Cybertron figure line, I jumped at it but was  disappointed at the space ship cannon he turned into and the overall lighter weight to his feel for a deluxe which I paid 18 or so for at Wal-Mart. I sold him off after a few weeks and was pretty disgusted.  In retrospect after knowing about Tidal Wave/ AKA Shockwave in Japan and seeing he was originally a purple and grey space cannon it made a lot more sense.  Seriously, if you wanna read this figure's whole history and crazy origins, read this amazing Transformers article.
Considering he wasn't even a Diaclone and was his own damn standalone robot figure is impressive. 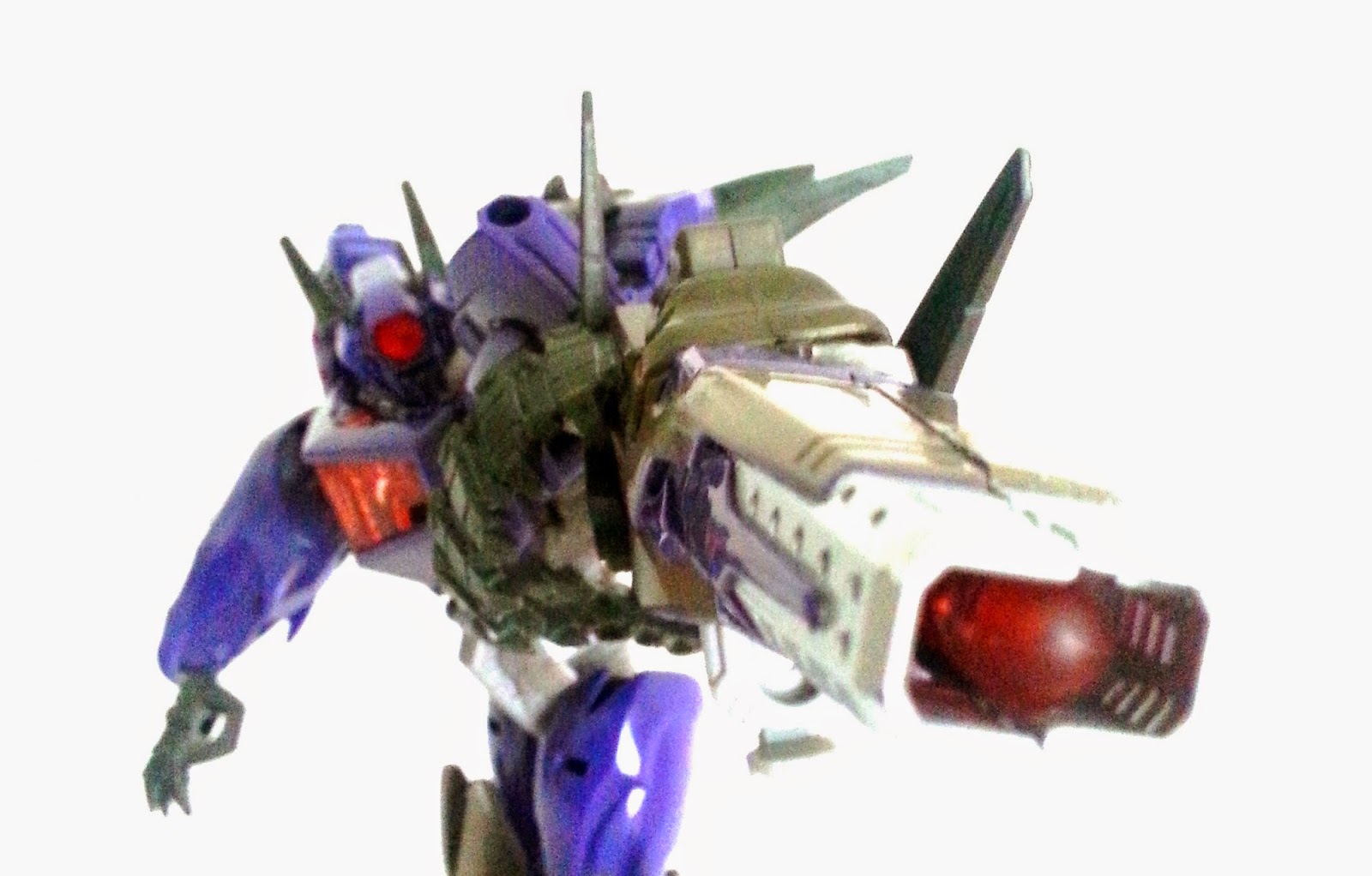 So onto this guy.  He's got the beast motif with horns, spikes and ragged teeth-like protuberances.  All works great and he looks very ready for battle. Really, I see some photos of a battle against Springer calling my name as I type this with a nice purple against green theme.   His colors are vibrant with great light piping through his one even cycloptic eye.  He has a nice gimmick on his arm which spins and exposes a nice internal weapon on his arm-cannon and his alt-mode tank treads unravel and turn into an ammo belt which attaches to his arm.  He also has translucent piped plastic on his chest to enhance reflection and glow.  He's a beautiful figure all the way to the headsculpt with nice articulation although my figures right leg is incredibly loose at the hip. 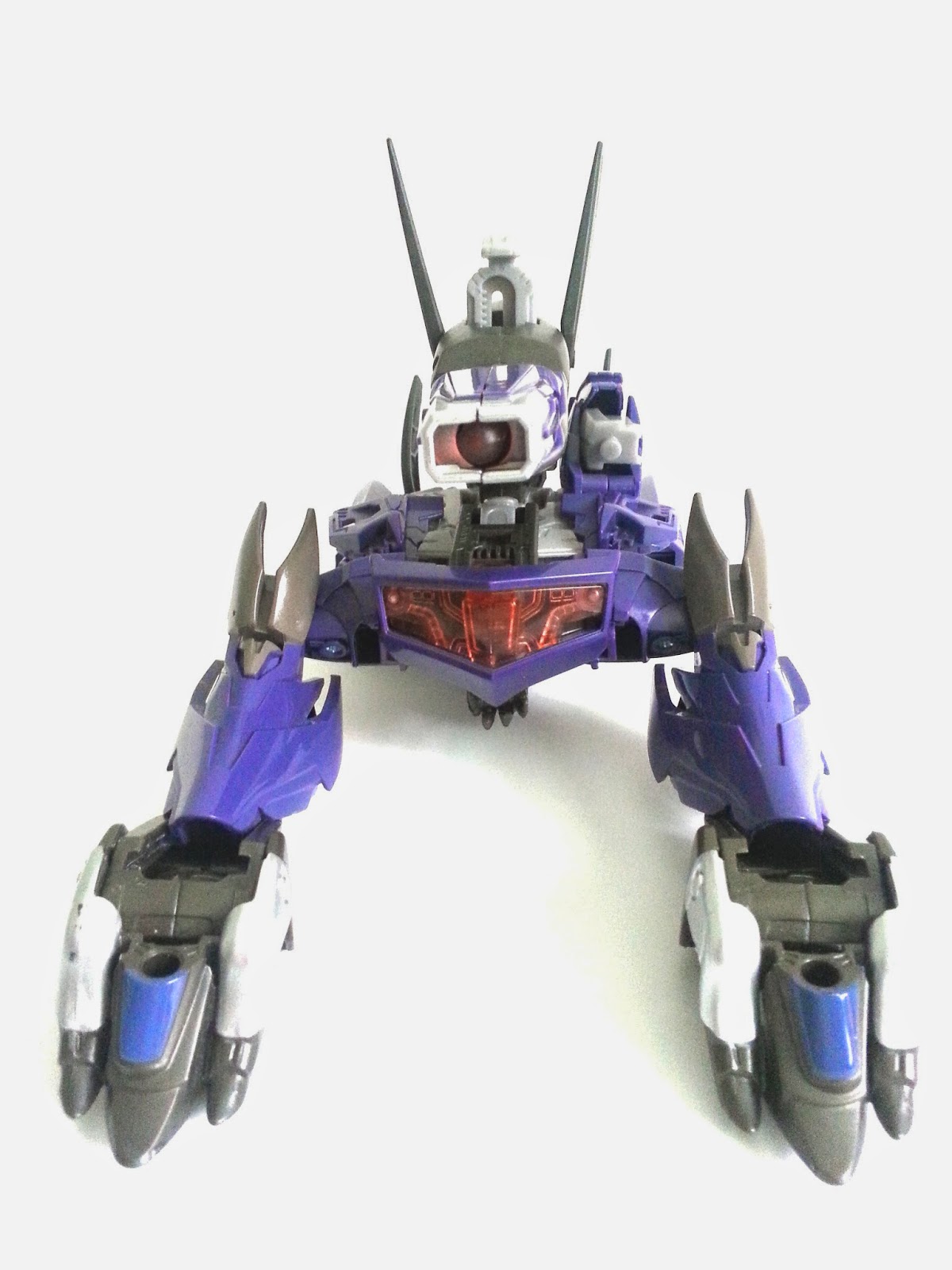 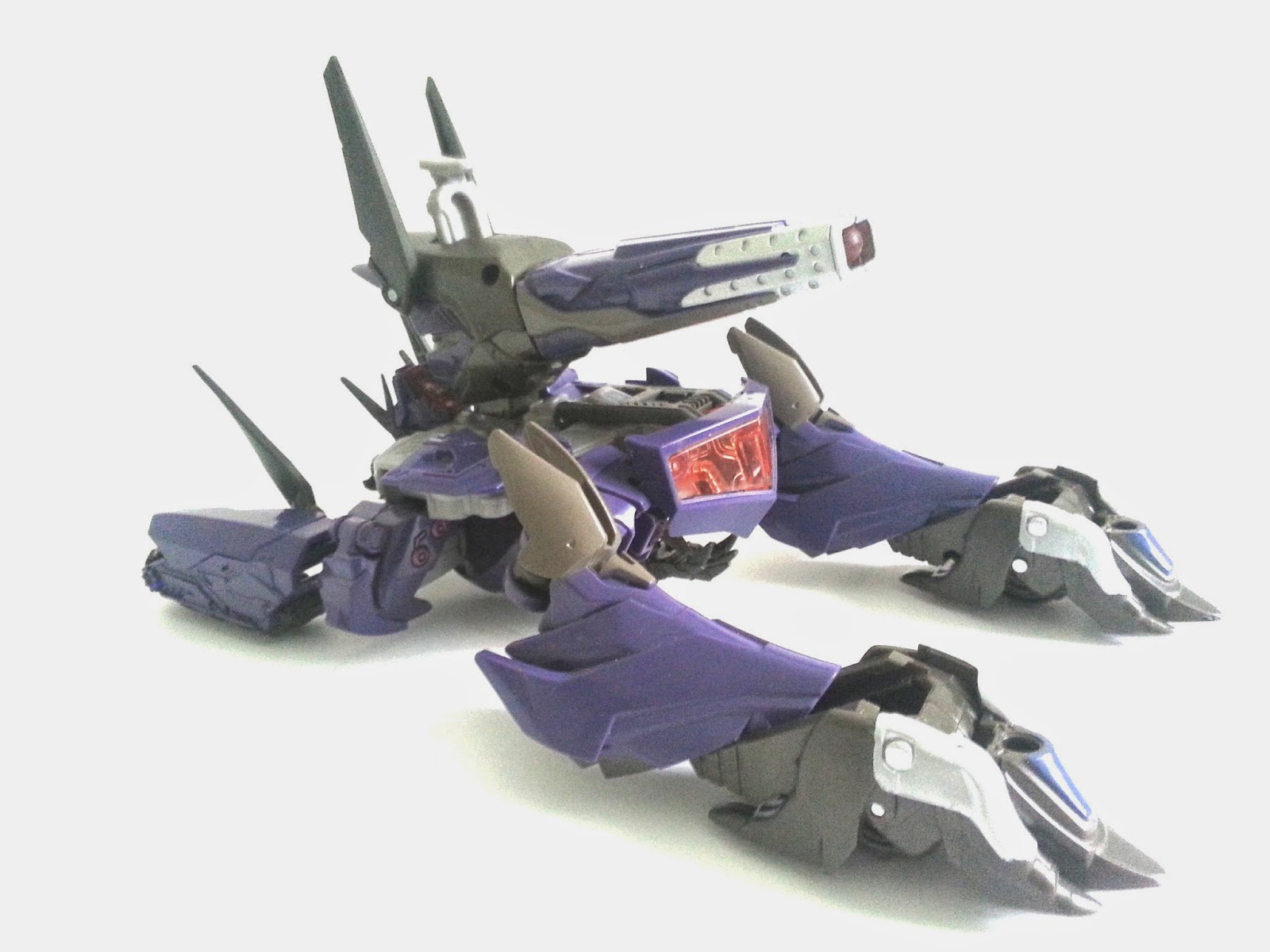 In his alt-mode, he turns into a giant artillery/ railgun looking thing.  I'm not crazy about it but the bot-mode definitely makes up for it.  He transforms easy enough and his alt-cannon mode is sturdy with nice small wheels to help him slide around and the central gun is a cool touch with treaded tracks in the back.  Very Beast Hunter-y and if you like the animal look, also included are some rubber claws and a face maw to attach to the front which I've never done because I hate how it looks.  If you like this, great... If you like the orange add ons in purble and green, check out the Takara "Transformer, Go!" redecoed version. 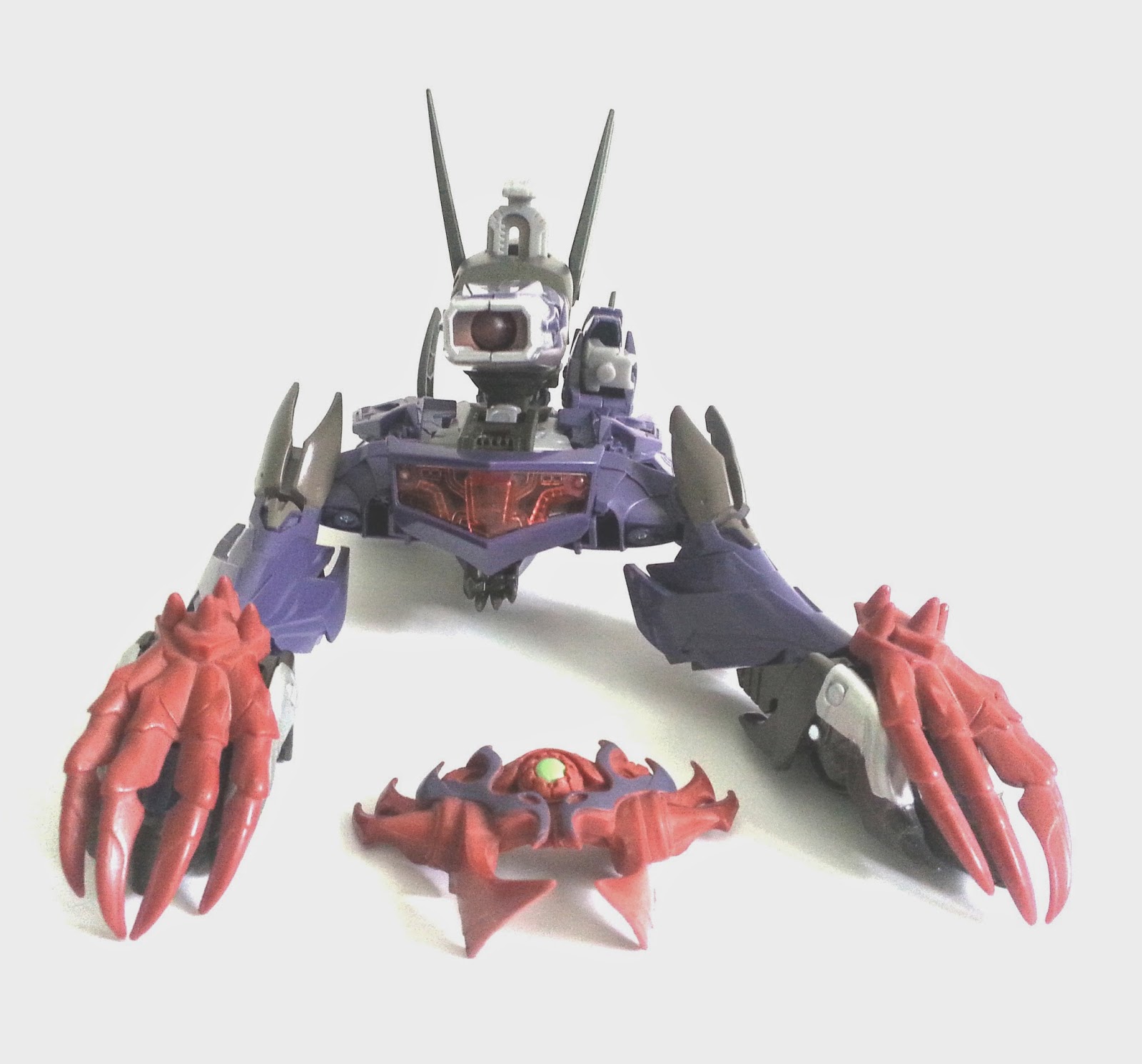 Verdict: If you love Shockwave or want to give the Beast Hunters line a shot while the figures are still sanely priced and accessible, give this guy a definite look.  He's totally worth it!
Posted by Mr. R at 8:14 PM