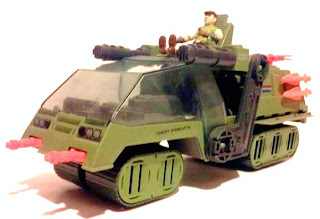 This is a review of the G.I. Joe H.A.V.O.C. (Heavy Articulated Vehicle Ordinance Carrier) Vehicle released from Hasbro Toys in 1986 as part of G.I. Joe's fifth series.   It's Cobra counterpart was the Cobra S.T.U.N. as both of these vehicles were prominently displayed in the Sunbow animated feature along with nearly every other series 5 vehicle and character. (Didn't see the Cobra Hyrdo Sled though)  I know the show was to serve as a vehicle to hawk toys but didn't you think they at least could have put a Cobra WOLF or Joe Snowcat in the arctic battle for the B.E.T.?  "Hm...we have cold weather vehicles...bah, leave em at the base." 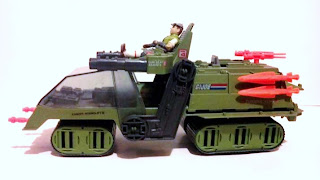 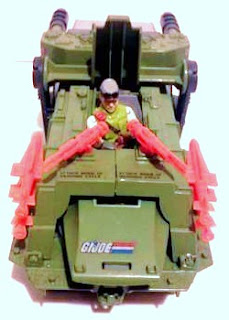 This was always a major favorite of mine ever since I saw the movie.  I loved how it had such a neat, boxy feel to it with the overhead gunner's port and lay-down front controls.  This, by no means, means I think it's a practical military vehicle in any sense of the word as exposed driver and gunner would probably result in 100% death rate on the poor sods who have to pilot this thing.  It also has a killer hovercraft that deploys from the rear gunner's position.  It operates on a double set of pivoting half-tracks and has the look to it crossing between a German Sdkfz 251 from WWII and a modern U.S. Armored Personnel Carrier.   It's colored in classic G.I. Joe olive drab and has 4 bright orange missiles (2 on each side) and 4 guns (2 front, 2 rear). 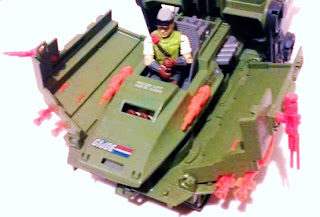 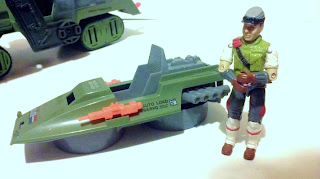 This vehicle also came with Cross-Country as a pilot, the southern fried Johnny Reb of the Joe team.  This version is my favorite though as he looks a little more soldierly than his later rendition putting him in a hunting vest and blue jeans...ugh. The vehicle can hold up to 11 (pushing it) figures with 3 on each side running board, 2 in the rear, a top gunner seat and 2 pilots.  It does have an variant that has glossy, brighter missiles that look redder than the duller orange-ish colored ones that were standard.  This mold was reused for the Sky H.A.V.O.C. for the Sky Patrol Line in 1990.  Also, a great vehicles.  One things I'll note for the Sky Patrol and the Python Patrol, they may be reused molds but these were perfect examples were paint jobs created practically brand new vehicles. 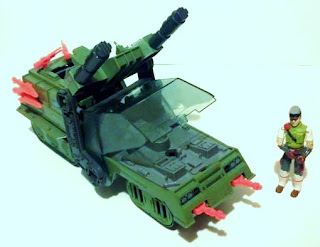 Articulation-wise, this vehicle has a ton of movable parts with a lifting canopy, double hydraulic lift for the gun that can position and lock in various shooting positions, two opening doors to release the rear hovercraft which has a sliding set of twin jet propulsion engines in the bottom.  Underneath the chassis, you have two triple tread wheels on the rear and two double tread wheel sets on the front both of which can rotate 360 degrees.  The missiles are removable and the four guns can all move (rear 360 range - front 45 range)  Can you believe this beast retailed for less than nine bucks?  God, how times have changed!
Posted by Mr. R at 11:35 AM