Like I said two posts back, last week was quite a week for my collecting.  I lucked out on two separate collections and am really having to exercise some major willpower to not jump at the last two Nick Turtles or the new series of MVCapcom 3 Minimates OR the new Lego Tatoonie Skiff just to grab the Lando and Boba minifigs OR the Fall of Cybertron Shockwave who is notoriously hard to find since I put him down in my local TRU a month ago, rrrr.  Needless to say, I cannot wait for subbing to start back up in 3 weeks to be reintroduced to some nice hefty disposable income!  By that time, the Beast Saga figs should be floating around Bigbadtoystore as well as the new Speeder Bike, K-Mart exclusives and other remnants of the final Star Wars Vintage Collection (not holding my breath)... 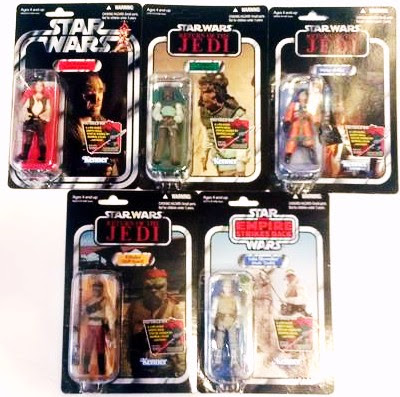 But speaking of the Vintage Collection, I made some actual finds!  8 months late but nevertheless, finds in their own respect.  I managed to find two older figs on Amazon for ten a piece so I snagged Luke Skywalker in Hoth Gear as well as Wedge Antilles. THEN, I joined up on yardseller.com at the recommendation of Flywheels post on his Sixshot find (good call Mr. Hopper!) and got a Nikto figure (Unpunched mind you) for 8 dollars after the 5 dollar entry discount, Then randomly, I was driving along Rt 11. and decided to make a random stop in K-mart kind of as a joke since they rarely even have crappy figures to choose from...and low and behold, the had a ton of new Star Wars guys!  They had Ayyla Secura, Clone Commandos and other stuff that I haven't seen yet on shelves but most importantly, they had Kithaba and Dr. Evazan!!! SCOOOOOORE!

These figures are absolutely amazing and totally worth the wait.  The detail on them is breathtaking from expertly crafted sculpts, great accessories and some of the most detailed paintwork I've ever seen on any figures.  Luke in the Hoth Gear was someone I've been psyched about for over a year since I heard about him at SDCC 2011.  He was my absolute favorite rendition of Luke and this edition improved on everything I already loved. I just kinda wish they included his scope goggles since they were one of my favorite pieces of equipment in the whole movie.  I love the application of his wrist communicator, rank insignia, translucent yellow goggles as well as all the nice detailing and sculpting on the ammo pouches and utility components on his belt.  One extra pair of goggles for his visor to attach would have been nice to include too (a la the Saga Legends Han Solo in Hoth Gear) But I'm overall very happy with this figure.  One confusing thing I noticed was Luke's mold had all of his detailing on the opposite of the production still on his file card making me think the production photo was printed backwards...I wonder who goofed? 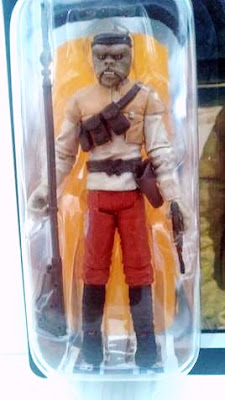 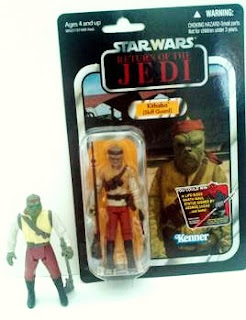 Kithaba (Barada) and Nikto and figures that I couldn't wait for when I hear about them.  These are truly amazing builds.  You know they are great figures when you notice detailing on them that you never even noticed in the movie like the lacing on Nikto's tunic or the perfect detailing in their facial molds with exceptional noticed paid to the eyes which are spot on representations of the real characters.  I always thought they had black eyes over the masks and not contact prosthesis that the actors wore so after all these years, it was really something to find out new about two of my favorite skiff guards.  Trivia: Up until this point, I never realized that Nikto here wasn't driving the prisoner Skiff but another Nikto all entirely.  A lot of mix ups occurred in these guys I guess since Kithaba was erroneously named Barada who actually was wearing an orange headband and was on the other Skiff along with blue tunic Nikto.  Whew...These guys can't help but make me mad though because I wanted to see more of these Skiff and Jabba guards produced (EV-9D9, 8D8, Amanaman, Squid Head (Tessek), Yak Face (Saelt Marae), The Rebo Band, Ree Yees, Klatuu in Skiff Guard Uniform, Bib Fortuna from the old school figs that could be proper vintage redesigns or new unproduced figures like Sgt. Doallyn (The guy Chewie throws down the steps), Ishi Tib (Starfish Head), Pote Snitkin (Second Skiff Driver), Ephant Mon, Herme Oodle.  Look at this! Like 3 waves right here and that's just scratching the surface but I guess we can just hold out till 2015or 16 before Return of the Jedi gets it's proper attention paid to it. 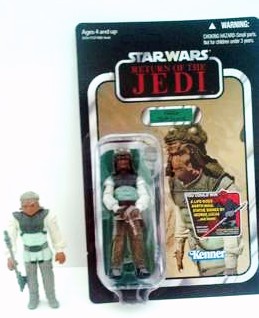 Also Wedge was someone I'm glad I got around to grabbing.  He was always a guy who seemed to get the shaft in the Star Wars figure-verse mainly because he was so similar to the pretty generic Luke X-Wing Pilot Fig which could have stood in for any rebel pilot.  I do like the detailing on his helmet and the facial scult looks pretty right on.  He'll go nicely with my other pilots and the upcoming Battle of Yavin Pilot Set. 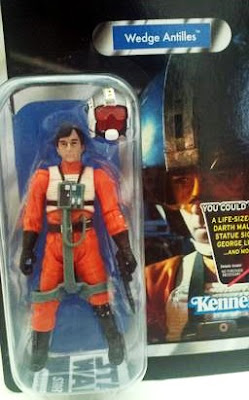 Last but not least is Dr. Evazan.  The foul mouthed fool who picked a fight with the wrong Jedi knight.  All those death sentences and he gets hacked by an old hermit.  The detailing is pretty nice and he comes with a standard Cantina cup and plaster.  I have him up on the shelf reunited with his poor buddy Ponda Baba (Walrusman).  It always annoyed me that so many Star Wars guys were overlooked.  As far as I saw it, If you spoke a line in the movie, you deserved a toy.  I'm just glad we got figure editions of Dak, Biggs and Grand Moff Tarkin to say the least. 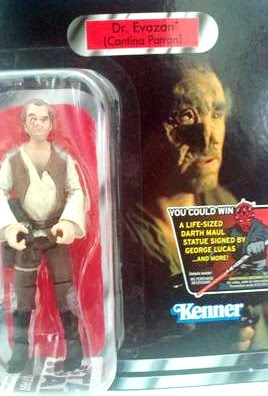 In addition to these awesome Star Wars finds, I also managed to majorly luck out on a G1 Transformers lot on Ebay.  I scooped 4 very nice conditioned bots for a mere 24 bucks with shipping included.  I got Blurr with Weapon, Kupp with weapon and booklet and the Decepticon Clone set of Pounce and Wingspan with perfect transformations, tight joints and flawless decals.  Kudos to this seller who kept these great figs in such pristine condition!  Take a look! 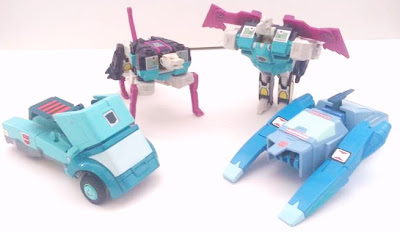 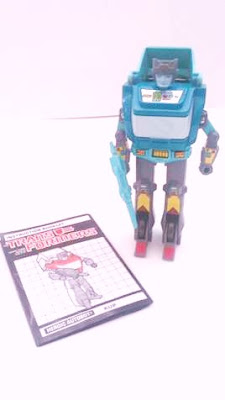 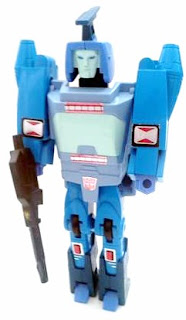 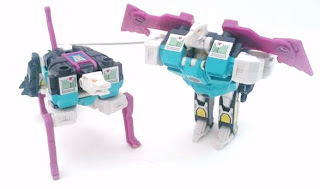 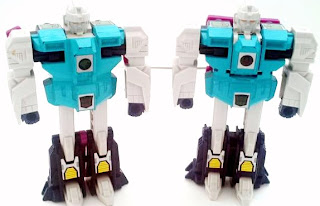