MAD AS HELL: The broken state of the Vintage Collection 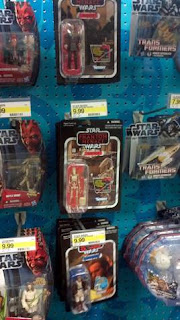 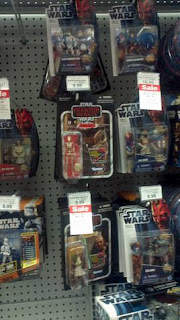 First and foremost, I'm telling you all right now this is a rant.   This is a current break from pleasant musings, toy reviews and pop culture nostalgic nuggets to sway into some official nerd rage.  I've just about given up on the Star Wars: Vintage Collection line from Hasbro and pretty much Hasbro in general.  That's it.  I've had it.  I relatively rekindled my flame of interest within collecting, toys and memorabilia and even from last year of attempting to rebuild my Joes and Star Wars, it has been an uphill battle.  I have no problem hunting from rare and hard to get items but an entire line of figures that just seems to be never stocked???    I remember it was July of last year and all I could find were Cloud Car Pilots and General Lando figures and thousands of Hoth Han Solo Legacy figs yet there were times I made a few great scores.   Meanwhile, this was not the case for 30th anniversay Joe figures as the  racks were empty for months pretty much until Renegades came out and we saw nothing by Scarletts and emo Cobra Commanders warming the pegs.   It took me 3 months to find Sci-Fi, LifeLine and the Techno-Viper and never was able to find the modern Alley Viper or Shock Trooper.   I could only shrug at the hard to find stuff and chalk it up that I must have missed the boat.  No big deal.  If Hasbro wanted to short pack army builders like the Gamorrean Guard or withhold a pretty major player like Wedge Antilles, so be it. 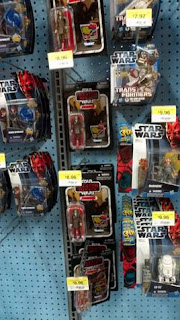 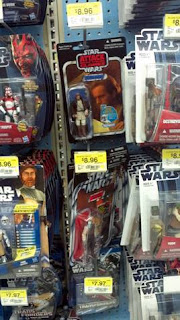 Two Walmarts...At least the one in Shamokin (right) seems to have a post PM wave (even though for some reason they decided to include Logray and Bom Vimdin and a bunch of other repacks...)

Then the Phantom Menace was re-released....

Okay, so I was already a little confused when I saw prequel figs on vintage cardbacks from the very beginning.  I personally hate the prequels and, in all honesty, they were the sole reason why it took me a decade to dip my feet back into the Star Wars pool.   Nothing has ever turned me off to something I previously loved so much like these movies to this franchise.  But I'll save you a Phantom Menace / prequel rant.  Head over to redlettermedia if you want to see in almost the format of doctoral thesis why these movies very well destroyed all that was well and good with the galaxy far, far away.   Nick May also did an article on SongsofSalmon explaining in his words why the Phantom Menace ruined the Vintage Collection.  Great read, btw.  Nonetheless, all I saw in prequel figs on vintage cardback was asshole characters taking up my original trilogy character's spots and peg space...and not selling well either. (Take a look on amazon's prices, you can get a Kit Fisto for 6 bucks!)  So now, not only were the vintage collection figures being overtaken by prequel entities but now, they were completely REPLACED with said entities...AND from the worst movie in the series... AND in the largest ever produced wave (of 12)  Could you ever imagine 12 Original Trilogy figures coming on Vintage Cardbacks???  I'd be so happy!  But this is reality we live in and usually the opposite happens as it is now.   So anyway, these 12 dickface figures have been sitting on the shelves in every major retailer in the country for 7 months now with seemingly no end in sight.  We've seen (or not seen for that matter)  3 additional waves of figures produced from Hasbro and they have yet to see the light of 90 percent of the major retailers in the country... so what will become of these series?  Are they ever going to make it to the shelves?  I could totally see Hasbro just passing right over them because after this, I  truthfully believe Hasbro hates its' adult fans and customers especially in the Star Wars collections and really fear that the overstock and production of PM figs is going to have long term negative effects on the vintage collection in general.  Some number cruncher in Hasbro's sales department doesn't give two shits if it's a Battle Droid or Grand Moff Tarkin sitting on the shelf.  A stagnated line that actually is costing you money will lead you to only one conclusion, drop the line or scale it back because it's "too risky."


I've been stopping by TRU, Target and Walmart on a weekly basis for about 28 weeks now.  Why are these retailers holding onto these figures that nobody wants???? I see these shelf spaces...the same Ric Olie Figure is still there at the Dickson City Walmart!  The same young Anakin Pod Racer Pilot is still in the Wilkes Barre TRU! Quinlan Vos (who the hell is this shitface?) is all that is left in the Pittson Walmart!  This is weeks now!  Why aren't these stores taking on new inventory?   It is there! It is ready to order!  Wouldn't you want things actually selling off pegs in very valuable location spaces in your store instead of having dead zones in your toy departments?  I wondered the same thing even before the PM series with the last small one.  Speaking of which, did anyone remember the last pre-PM wave that came out and the hell it was trying to find the Echo Base Trooper or Ponda Baba? (This could easily be a problem when an entire wave is made up of 3 figures...cause that makes sense right?)

Why ever would we get 12 figures shoved down our throats for any toy line is what I want to know?  Hasbro has been downright stingy with many of the figs we wanted to see and get (C-3P0...AT-AT commander)  Then we not only see a 12 figure wave that nobody asked for but an additional Phantom Menace Series for all retailers and an "exclusive" 3d series for Walmart!  3 God-Damned series for one movie?? Do you think that's enough?   How many Anakins and Obi-Wans can I get?  This would be like if Ford was making a new car and looked at the potential buyer market and saw...we have 1 million potential customers....well lets produce 3 million cars! In each of our subdivisions! This would be suicidal policy!  But once again, Phantom Menace knows no bounds in being able to destroy all it touches.  Lucas can't seem to shove this shitty set of movies down our throats enough within re-releases, tweaks, promotions...Darth Maul is coming back for the Clone Wars (I don't care), Jar Jar in carbonite is the FOCAL POINT of the SDCC figure set!!! I don't care if he's frozen...ha ha, no seriously stop devoting molds and figure space around the worst chracter in cinematic history.  That is ultimately what this whole thing is about... buying sets of figures we hate so we can get the little taste of the true vintage figures.  (even the Sandtrooper is a Special Edition one with the stupid scanner droid)  I guarantee we will see a senator Jar Jar before we ever get a Moff Jejerod, Momaw Nadon or Squid Head in the VC.   Turn on any Star Wars feature on Spike TV and what is it?  Prequel!  Want more figures? Prequel!  Well...there's always Galactic Heroes and Fighter Pods or Transforming Star Wars crap to take up some more space.  All I want are the 3 figures per wave that they will produce that won't be  short-packed and not pay 20 dollars a piece on Amazon, am I asking too much???  Is anyone else feeling the same way I do here?
Posted by Mr. R at 5:51 PM