A lotta info has been dropping over the past week with the various SDCC showcases and developer booths.  Here are a few of the prime information pieces I picked up over my scrolling of numerous blogs, sites and pages.


The biggest bummer I read was yesterday when my very fears as spelled out in my previous Vintage Collection Post apparently is coming true.  Hasbro has announced that the Vintage Collection is going on Hiatus (pretty much cancelled)  and being replaced by "Droid Factory" figures.  Whatever their BS reasoning is, we all know it's due to their absolutely soulless and money driven push for forcing an inflated wave of unpopular action figures geared at young children into their only true adult series of figures which, in turn, sold horribly and as a result the fans will now suffer.   I called this a week ago and this was something I really didn't want to be right about.   Not only this but I noticed at the showcase photos and on rebelscum.com that they are also shoehorning in two CLONE WARS figures as well into the Vintage Collection!  While we're at it, how about we start making animated looking classic figures and flooding the Clone Wars line?  Wouldn't that be great?

The silver lining is that there are some very nice figures and sets coming out but even these aren't without some major issues.  On the forums at Starwars-figuren.com, I managed to find some leaked photos of the Vintage Collection AT-AT ROTJ packaging and what really stands out is that there is a VC Speeder Bike and Scout in the corner! ***correction, Rebelscum just posted Hasbro's display of the new speeder and it is not the previous pic on the AT-AT box***   This really looks like the end all be all speeder bike for anyones collection...corrrected petals, newer looking scout, detailing all over, great handlebars.  We finally will have a speeder bike that looks like the pilot is really riding it!

Also, there have been some showings of the new Toys R Us K-Mart exclusive Ewok Scout Pack and AT-ST driver pack.  Nice renditions of harder to get figures and I absolutely love the AT-ST driver.  Always have.   Above is a pic of the Toys R Us exclusive Ewok figure set and a few shots of the last wave of VC figures including Nien Numb, Weequay, Imperial Royal Guard, Lumat and Prune Face.

There are also a pair of 3-pack exclusives from Target which, in total, have 3 new figures adding the VC ranks.  This also pissed me off because, in all honesty, there is absolutely no reason why Hasbro couldn't have released Snaggletooth, Death Star Droid and the Power Droid on their own vintage card-backs but instead are gouging fans now for having to either rebuy R5-D4 or both Boba Fett and Tusken Raiser (Why is Boba Fett in a New Hope set with two Tatoonie characters? Lazyyyyyy, Hasbro)  I'm telling you Hasbro is out to get you, VC collectors.

Also, Battle Beasts News posted on their page some info regarding the Diamond Select Minimates Battle Beasts figures and I'm starting to think I'm going to be dodging this collection.  I'm sorry but these figures just don't look like Battle Beasts....they look more like any random anthropomorphized animistic set of heroes and villains from any 90's cash-grab cartoon. (and not one of the better ones)  Also, there are some pictures of random people in this set...I'm not sure if this is a mistake or what is going on here.  We haven't seen everything so maybe this still may work but I kinda lost my enthusiam when I saw the Insectoid with the Goat figure for the SDCC exclusive set.  All I'm thinking is, I'm way more likely to gravitate toward the Takara Beast Saga (although pricier) when I go for reboot Battle Beasts figures. *Photos from 16.bit.com*

On an added note, I just saw some pics of the new Transformers: Fall of Cybertron wave 2 figures at Seibertron.com...still need to grab that pretty cool Shockwave just for the bot mode.  We will be graced with Grimlock, Blaster and Steeljaw...noice! (hit the link to see more) 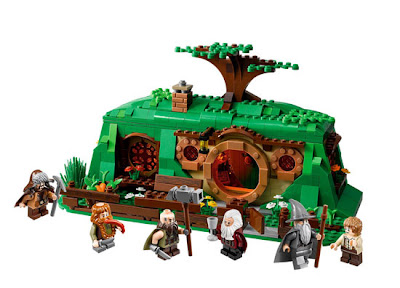 On top of that, Lego Asia linked the amazing cool Bag End Lego set to tie in with the upcoming Hobbit movie...if any lego set needed to be made associated with Lego LOTR/the Hobbit I'd say anything Shire captures the win!  Now all we need is The Dead City and the Black Gate of Mordor and I'll be even more broke. :)