Last week’s topic was a little vague, and the vagueness continues this week! This week’s assignment from the League of Extraordinary Bloggers, if you’re man (or woman) enough to accept it:
–
“Cowboys.”
— 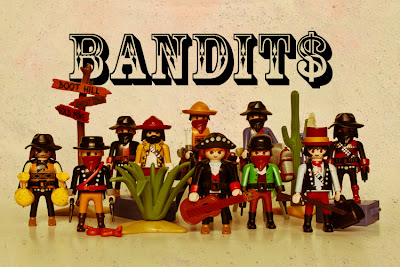 Are you starting to see a theme here? Stick with it this month and I think you’ll be happy with the results.

Hey Dudes...Onto post number 2...Coyboys.  I dig it.  Watch out for those jackrabbits and that killer cacti.

This is also coming in late but I honestly tried to get this one out a few days back but honestly was looking for the title of one of my cited sources and I just found it this afternoon.  I'd like to talk about a few different types of cowboys, from cyborg, to pirate to space cowboys, this archetype character shows time and time again that the saga of the old west can live and relive at an infinite amount.

Hong on the Range - William F. Wu - this comic series based on the work of fiction from 1989 tells the tale of Louie Hong who travels across the desolate futuristic American west on the run from bounty hunters and the law after a gang of cyborgs blame him for a bank robbery.  Very cool artwork, stylized characters and a very cool steampunk look to it.  Definitely give this a read if you can find it from Image comics.

Scud: the Disposable Assassin - Rob Schrab...has a lotta western inspired story-telling from this robot hitman who rides a mechanical horse, has guns that never run out and is essentially a weapon for hire. On top of that was the spin-off series "Tales from the Vending Machine" which actually had an issue which was set in the old-west with a powerful strong silent type by Ruben Martinez.

If reading about futuristic cowboys ain't your thing...try blasting away some varmints on either an 8 or 16 bit console.

Wild Guns - For 16 bit, this Western future shooter nails the arcade inspired action and has very innovative control style with furious action.  I only got a change to play a mod of this on my PC with a Keyboard and I must say, it wasn't the same.

Mad Dog McCree - This LaserDisc engine arcade cabinet blew my mind when I saw the dollar a try game at Hershey Park's arcade.  This was like no other game I ever saw and really was quite a spectacle.  Even by today's standards, I still think of it with fondness...not so much for the glitchy, grainy Sega CD version.

Check out the League hub at Cool and Collected for this week's post.
Posted by Mr. R at 3:51 PM