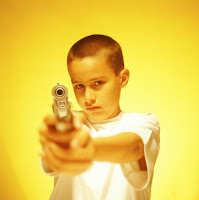 So anyway, if have ever heard of her. The singer and Sri Lankan born, M.I.A. (Paper Planes) recently spoke to Connect Magazine regarding the effect of violence in gaming toward younger players and questioned its merits and the long term consequences.

Here's the LINK to the interview summary.

Based on some of the responses, I'm seeing some big time ignorance and close-minded jack-assery coming from, yet again, the defenders of my beloved hobby whom (in many cases) don't appear to even have read beyond the articles title and just let their "raised with x-box live etiquette" flood of insult, misogynism and epithet spew forth. Think Family Guy: "Kevin Bacon was NOT in Footloose! hawwwwww heeeeee hawwwwww." This is very similar to the deluge of shit-talking poor Roger Ebert faced when he went so far as to express his artistic opinion that most games were not art (which to his defense, a lot of them absolutely are not)

Now, I'm not really a fan of MIA but she does make a decent point. There's a documentary called "the soundtrack of war" where soldiers interviewed literally say a lot of them were expecting the war to be like a video game. "I was expecting to just aim down the sight and shoot...It's a lot more gruesome than you think"

I mean look at the Desert Storm coverage of "Smart Weapons." We have better resolution versions of that today in games (The Specter Gunship levels in Modern Warfare) When I showed movies about the War on Terror to students of mine, they immediately were saying "wow, this is just like call of duty!" Don't get me wrong, I love war games of all types but you don't need to be a student of propaganda to see a form of desensitizing taking place, a fun and satisfying form of it nevertheless. (A hallmark of really good propaganda)

Also, the older generation of gamers needs to realize, games developed as they matured personally. We grew up on 8 and 16 bit sprites that clearly were not any accurate depiction of what murder and mayhem looks like (Duke Nukem, Doom, and Commander Keen). Now the "old ultra-violence" (to quote Alex DeLarge) is taking a much more advanced look and feel for a much younger audience. Of course we know it didn't effect us, (more suicides and real-world violence is related to games seeded in the MMORP and RPG genres) the only question is, how will this affect younger players as they age? Its like testing meds on the market, we won't know the side effects until after it is too late. There is no trial period; we are looking right at it in younger players. If the effects are visible any time you play a session of x-live and listen to some of the stuff coming out of these kids mouths. If this is a testimony to the fabric of America you would think Women's Rights, Civil Rights, Americans with Disabilities Act and the LGBT Rights movements never happened and our society simply digressed to white-supremacist neanderthals grunting expletives at each other.  Sufficed to say, there is some horrible stuff being said on these headsets that would probably make even the drafters of the first amendment question its merit.

As for violence, why are video games truly at the center of this storm? I don't see people going after the Full Metal Jackets of the world and critics and viewers alike had a splooge-fest over the Hurt Locker. (It seems all you need to do to show war and get away with it is to mask it behind "war is hell" "war is futile" "this is really anti-war but we still are gonna show how bad-ass it is" messages) However, would there have been more of an outcry if kids were taking on the persona of Private Joker and putting a round through a female sniper's dying head? Interactivity, no matter how you choose to argue it, takes precedence over viewing, listening or reading because here, you get to do all three and control how you do it and how much you do it. Part of the reason Ebert said it cannot be art because the interactivity makes it disposable. (I guess he never saw a "choose your own adventure" book)

Remember people raving over Microsoft Flight Simulator back in 95 because you felt like you were there? That is what modern hyper-real games attempt to do. Its not about fantasy conflict (ergo Mass Effect or Fallout, even Command and Conquer) but representing actual real death and destruction in army sims where you are the Spec Ops guy. GRAW, Tom Clancy, America's Army, Full Spectrum Warrior really take the "fuck yeah" approach. Do you think kids would know about the Javelin, MP-44s, SAW gunners, Blackhawks without the Sam Fishers of the world? Some parent's couldn't stand when the current president (although there was no outcry against Reagan or H.W. Bush who did the exact same thing) wanted to talk to the nation's students about the merits of staying in school and working hard but yet no distinctions are drawn between obvious super-patriot indoctrination that comes from modern FPS games. We are talking "Triumph of the Will" to some degree, maybe not that far. It's strange, it seems these games want to foster a love of all things military but the lines seem to be blurred when it comes to it being an American Military. When I play these games I never really see myself as an American killing non-Americans but more an army guy shooting other army guys.

On Destructoid, Jim Sterling, (beyond completely misrepresenting MIA) goes further to reiterate the age-old bullshit American argument that "eh, like there wasn't violence before games, movies, etc....what about violence in the Middle East, they are violent and don't play video games" As if this is a good thing. Maybe SOME people over there are violent because they come from a completely different background, being fostered on age-old tribal and religious conflict and wracked with internal and international war up to this day. Americans are really in no position to make any comparison. In any modern sense we haven't been invaded (so don't say war of 1812), we haven't seen combat in our backyards (so don't say Civil War), we haven't seen actual threats of annihilation or faced genocide. (Unless you’re talking about the Native Indian genocide) So what is the idea here, we haven't seen these actual acts of violence to perpetuate a violent society so we manufacture virtual violence to jade our youth to the actual consequence of real violence? I dunno, slippery slope.
Posted by Mr. R at 2:49 PM