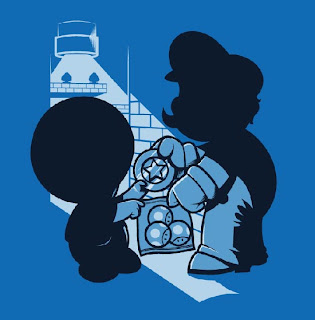 The wait is finally over, not only the Lost finale airs in an hour but Mario Galaxy 2 was released today! If anyone knew me slightly as a kid, I was a Mario freak. I could draw him in 10 seconds upside down, for God’s sake. Every time a new game came out, it was my obsession. From the first time I got to try it at my cousin’s house as a six year old, I couldn’t get enough of it. However, from my high school years, I've taken quite a big break from Nintendo but that's the magic of it. You can put it down for a decade and it will always be there waiting for you.
Mario’s latest journey was released today and based on the reviews; it’s looking to be a almost definite shoe-in for game of 2010. One thing I’m seeing is although the unanimous praise, the haters are coming out of the woodwork to take the red and blue clad plumber down as many pegs as they can. It is a baffling degree of negativity and bitter bullshit that seems really unwarranted. I just don't understand how people hate on this console wars bullshit so much. “It doesn’t display the Pixel power”, “it has no story”, blah blah. These are acceptable complaints but, if you notice, these people ironically who are bashing the “no story” argument are the same who hate on art or indie games for having too much or too complex a story. And usually these complaints would be adequate if these were people who followed the Mario story and thought this story was less or sub-par compared to the long going feud between King Koopa and the Mushroom Kingdom but usually you’ll see something comparing this game to Halo, God of War or whatever Sony-Microsoft exclusive they think should be on top. This is more about some unfounded corporate mascot loyalty taking drab, brown-drenched, color free, flat storied “hardcore” or “mature” characters overtly in favor of a pure, imaginative, happy, colorful character from our childhood who stayed strong and lasted through it all. What I love about Mario and Nintendo is their upfrontness, and their willingness to stay true to the magic that got us into games in the first place. They are unafraid to call the medium what it is, a game! Not some horse shit “playable cinematic experience” which is, when you strip away the million dollar ad campaign, the over the top violence, and the high-def production, also a toy!
Less is in fact more and the best thing about Mario's story is that he can tell it without saying a single word besides a hearty Yahoo! Man goes to a new, strange environment to conquer a looming enemy force and make things right and, once order is restored, he returns to his old or familiar world a hero. You can do this again and again and have a hit. Lord of the Rings, Neverending Story, the Goonies, Star Wars, the Odyssey, etc. As a kid, wasn't there a book or movie you remember being able to read or watch again and again? Mario epitomizes this feeling while always keeping it fresh. Furthermore, the Sony and Microsoft dicks needs to deal with the fact that Mario (along with Sonic, Alex Kidd, Bonk and Pac Man) was the pioneer of bringing video games into the mainstream. Without him and his popularity, the bland, replaceable, big, armored dudes with some various weapons wouldn't even exist. Mario/ Duck Hunt was the game included with the Nintendo console so, for almost an unanimous degree, (besides Sega kids or the super rich Neo-Geo kids) it was the first game many of us played. Nintendo was putting everything it had on their block-breaking front man and they sure did deliver flawlessly and still managed to push the envelope again and again…. Anyways, the point is, if you have a can hate on Mario, your hating on a symbol of childhood for everyone who makes all of the games you play today.
Posted by Mr. R at 5:08 PM