PS3 Game Review: Last of Us DLC: Left Behind

Just finished the first DLC add-on to the amazing Naughty Dog PS3 exclusive, The Last of Us entitled Left Behind.  This story focused on a vignette of Ellie immediately after Joel takes the tumble on the rebar in Colorado from the original game and she has to fix the hole where the blood's coming out so to speak.  While we are guiding Ellie through this add-on of the Winter Chapter, we take intermittent flashbacks of Ellie's days in military boarding school  in Boston with her best friend Riley who, up until now, was only briefly mentioned. 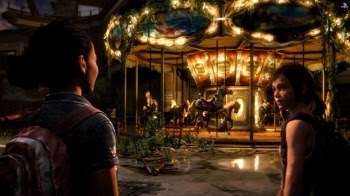 Game wise, it's a one hour/hour and a half quick solid play through.  We pick up right in the middle of the action from the original game setting a nice sense of continuity.  I didn't really know what to expect but it was a good choice on the developers to add onto the only part of the original game were we did have control of Ellie.  I was not expecting to play anything additional to the original story's time frame so this was a nice surprise.  It makes sense in many forms and I'm glad they went this way to keep a harder,  weapon wielding, resourceful Ellie in the game.  To have her doing this stuff in a flashback really would undo her hardened character as the original plot developed and it also serves as a great way to juxtapose the powerful solo Ellie mission against the much lighter Summer rendition of the character before she even knew she was immune and still much more of an adolescent.  Even when you play as her in the flashback, you aren't really playing as much as guiding her through a story as she interacts with her friend and sets up a bitter-sweet bond that sets the precursor to the character we later meet in the full game.  There's no real "action" so to speak until the end in the flashback scenes leading right up to the fatal attack on Riley and the events that immediately precede the final scene really puts the hook in you and their meeting and exploring still sets an atmosphere that hangs heavy with the rank and file anticipation you've come to expect.  It shows that although these are characters that have grown up in this hellish world, they are still very green and act carelessly that you as a player of the first game are thinking to yourself, "be more careful...don't turn on the lights...oh man, don't play that stereo!"    The creators of this game handle the girls' character development, interactions, dialogue and facial expressions in a way I've yet to see in a game and nothing seems forced at all.  Very rarely do you get to live out such honestly youthful and sweet moments in a game like listening to a mixtape, playing an imaginary video game, telling jokes, messing with a magic 8-ball and playing "guns" with supersoakers...I couldn't help but smile since they were directly playing with the Supersoaker 50.  A lighter side of the Last of Us but a necessary side nonetheless.  The cut scenes flow with the game play so well they don't seem hamfisted or unnecessary and Ellie has been hashed out so well in the previous content that you really want to see what she is doing and thinking.  A lot of love was put into this character and it definitely shows.


I don't want to give too much away but it evokes some true emotion, not so much as the first games bigger moments but it still holds its own in my opinion.  It looks amazing and really feels like its own separate story within a story.  It is delivered in content in a way I only think could be in an add-on chapter and if it were spliced into or included in the original story wouldn't have worked nearly as well especially since it would have majorly taken away from the power the original games first playthough had when you start the Winter chapter with just Ellie and have no idea what happened to Joel.   We are really only playing a real-time hour of Ellie's life from two different moments and this hour show us so much in character development that 6 hours of cut scenes in Metal Gear could only dream of.  (Metal Gear is great, don't get me wrong but...)

﻿﻿
The majority of the action is held in the segue of Ellie finding medical supplies for Joel's massive wound.   They are hiding out in a mall in Denver and we see their second run in with the cannibals. This is the only thing that doesn't work for me because this shows that Ellie is aware that the attackers from the college are still looking for them and would have taken the gravity out of David's confession to her in the first game since she would been likely to be much more "onto" him than when he tells her his true intentions.   The action is solid and the setting is nicely developed.  You are mainly getting a medkit from a Med-evac helicopter crashed through the skylight.  You get a nice set of background notes about the demise and fate of the surviving crew and I found it to be an "aw man" moment when you finally find the remains of much talked about Ellis who had his arm amputated by his commanding officer.  It made me immediately think of the character of Ish in the sewer tunnels as you read so much about him and then his story line just vanishes.  At least here, you get a "fleshed out" end to a small little story within a story. There's one very cool element added to this that the entire first story doesn't really touch upon was the occurrence of enemy survivors coming into contact with the infected.  You'd think this would happen all the time but you never really see it in the sense of a three way battle.  Here you get two specific instances were you get to use the infected as a tactical weapon in just as much sense a nail bomb or Molotov. It's a gameplay mechanic that sings and I loved every minute of it.

I've seen a few complaints about the pricetag of 15 bucks around this game but I very much enjoyed it and thought it was well worth it...I've paid much less for games on sale that had way more content that bored me to tears (Brothers in Arms: Hells Highway for 5 bucks comes to mind) and didn't have a fraction of the enjoyment this game fostered in me.  As a story, it was great.  Production was completely on par with the super high levels of the full game and the game play was a natural addition to the what made the full game many critics game of the year.  I can only hope this isn't the only bit of DLC we see for this game.  Maybe so since I'm hearing a sequel is planned.
Posted by Mr. R at 5:21 PM

Email ThisBlogThis!Share to TwitterShare to FacebookShare to Pinterest
Labels: ps3, the last of us, video games