I have recently started rebuilding and reformatting my Transformers collection.  Pretty much done with G1 and G2 due to expense and the annoyance of collecting dozens of little pieces...(did you ever look at how much stuff comes with a Pretender figure???) and am focusing on moderns.  I originally wanted to focus on Voyager class due to size and recent improvements in quality but I've diversified and looked into getting anything that looks appealing without a pigeonholed need to "complete" any one or two lines.  Case in point, I picked up an Animated Soundwave and Laserbeak and probably will never buy another figure from the line with exception to Blurr or Longarm Shockwave.   I've made some pretty nice scores and have gotten quite a few guys at very decent prices so far.  I have however been noticing some self-kickingly high prices on fairly recent figures....some Prime series bots and cons are going for double their original retail cost which blows my mind considering they are 2 years old and literally warmed the pegs when I was only looking for Star Wars Vintage Collection figures.  I can't remember whose blog I read it on but there was some speculation that Hasbro's poor distribution of that toy line potentially killed the series way earlier than planned, pity because I'm looking over those figs and the Prime (and even some Beast Hunters) figures are some great slick sculpts that do a modern take on the Robots in Disguise with proper justice. 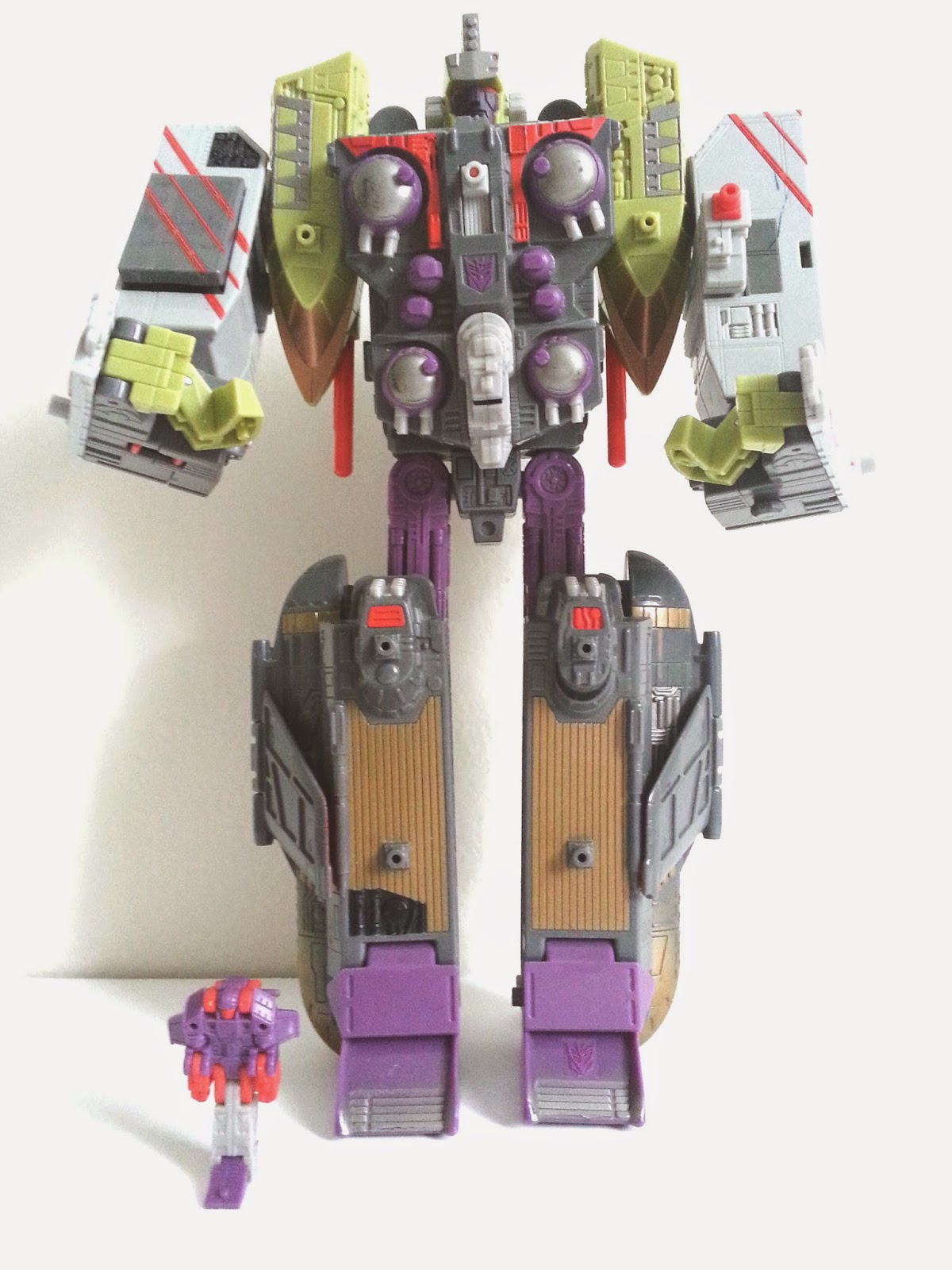 I gotta say, a simple look at the newer stuff has really been impressive and honestly, Transformers seems to be the only actual toy line that one can still collect in stores that has a nice variety of stocked and easily accessible figures that rotate waves fairly steadily.  I  have all but given up on Star Wars and have only bought 2 figures in the past 6 months their line. Hasbro still sucks balls as far as keeping the two and a half big-box toy retailers we have left stocked with figures where clear demand exists like Swerve, MP Grimlock, Tailgate and Cosmos for example.  But all in all, I'm still actively finding stuff to buy and to think Voyager Whirl was who I have to thank for getting back into the collecting pool...granted, I have to store ALL my stuff in my closet now due to space limitations.  Someday my amassed goods will have a nice shelf to call their very own. 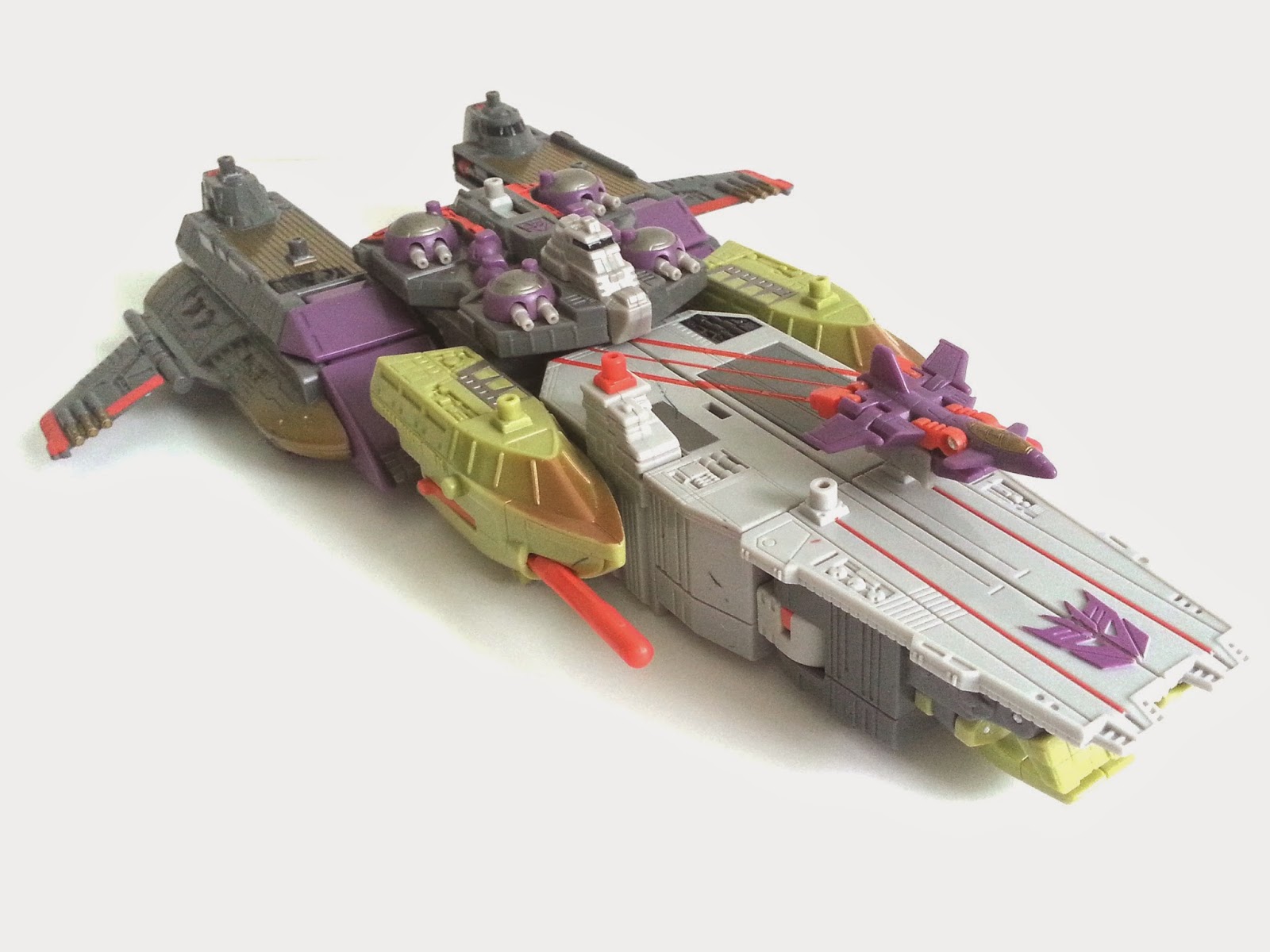 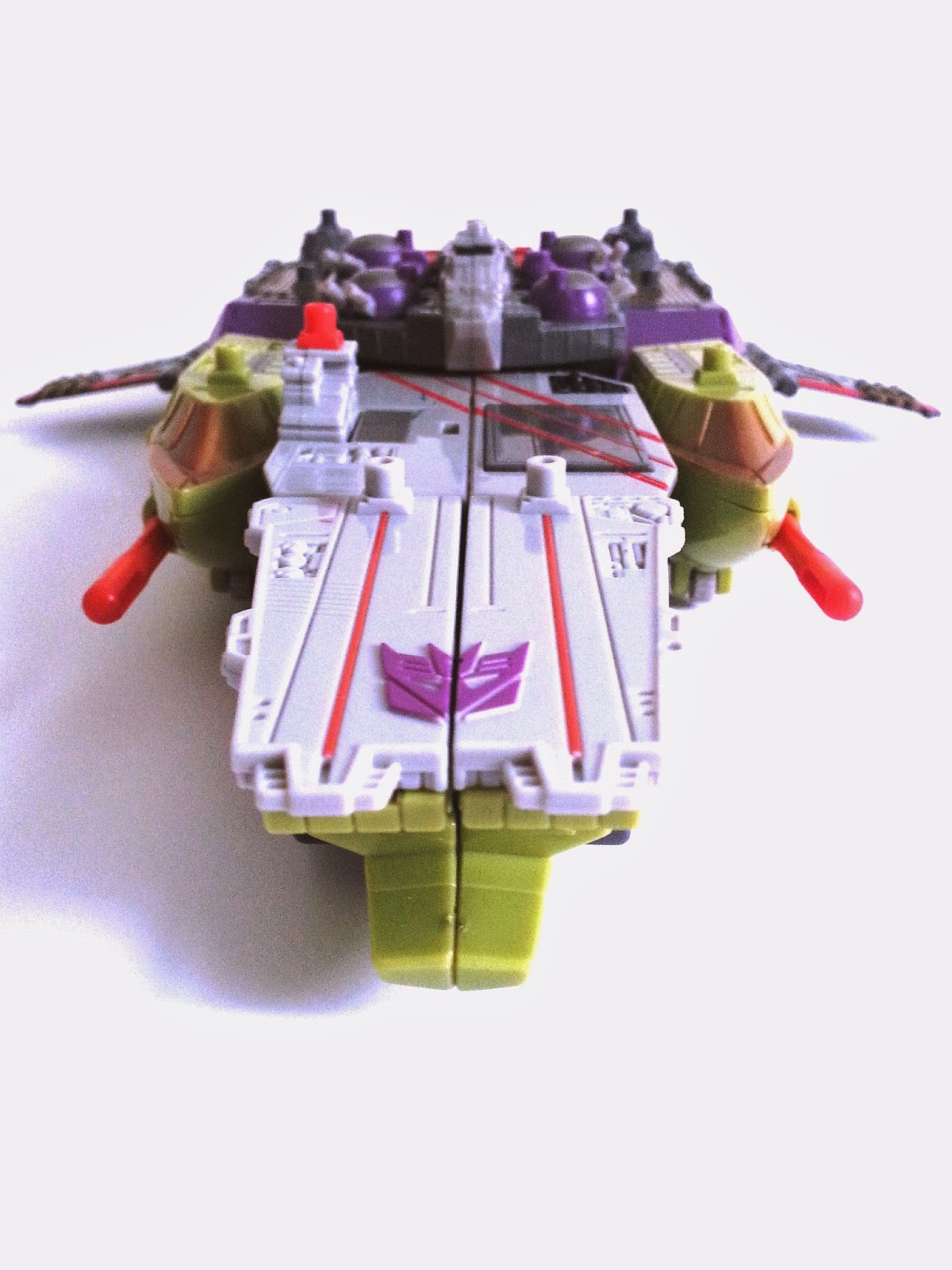 Here, we are looking at a series I haven't touched yet.  I want to focus on the Armada Series', Tidal Wave.  He was released in Japan with much more appropriate purple and dark grey coloring and was known as Shockwave for the Micron Denetsu series (Our Shockwave was known as Laserwave over there).  He would later be recolored and re-released under the Energon line with a white, gold and translucent green motif as well.   He's a Mammoth of a figure comprising of three separate Decepticon Naval/Space vehicles that comprise the "Dark Fleet" which all combine together to form a massive attack craft (very much reminding me of Computron's Scattershot) which then transforms into the Giga-Con Tidal Wave.  Also included are two firing missiles and a mini-con version of Ramjet which is purple, grey and orange as opposed to the burgundy and white G1 Ramjet.  The Armada line's gimmick was to include a mini with every deluxe or voyager edition figure and the minicon unlocked various features by plugging into different points on the bot much like the Keys in the Cybertron series. 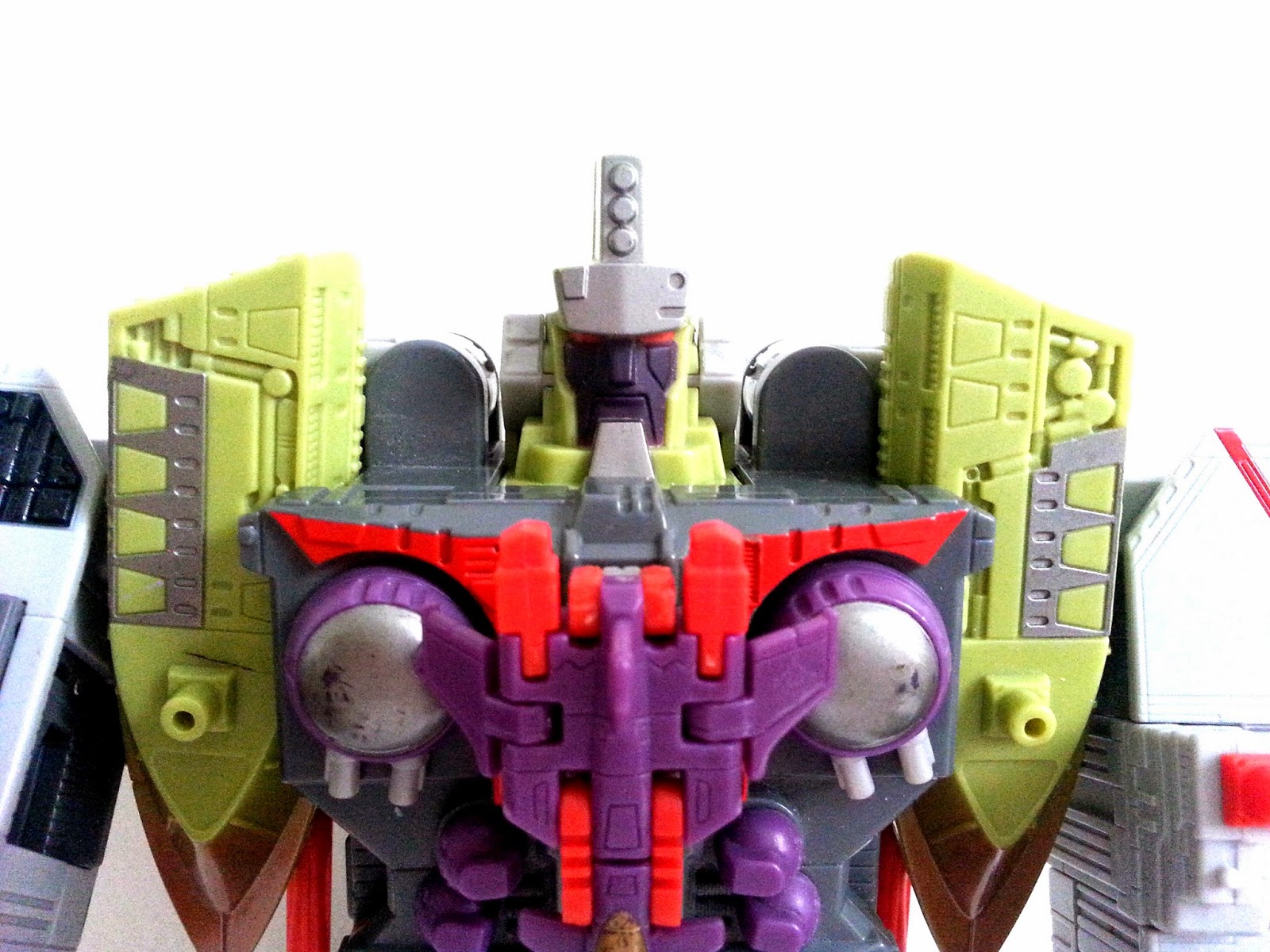 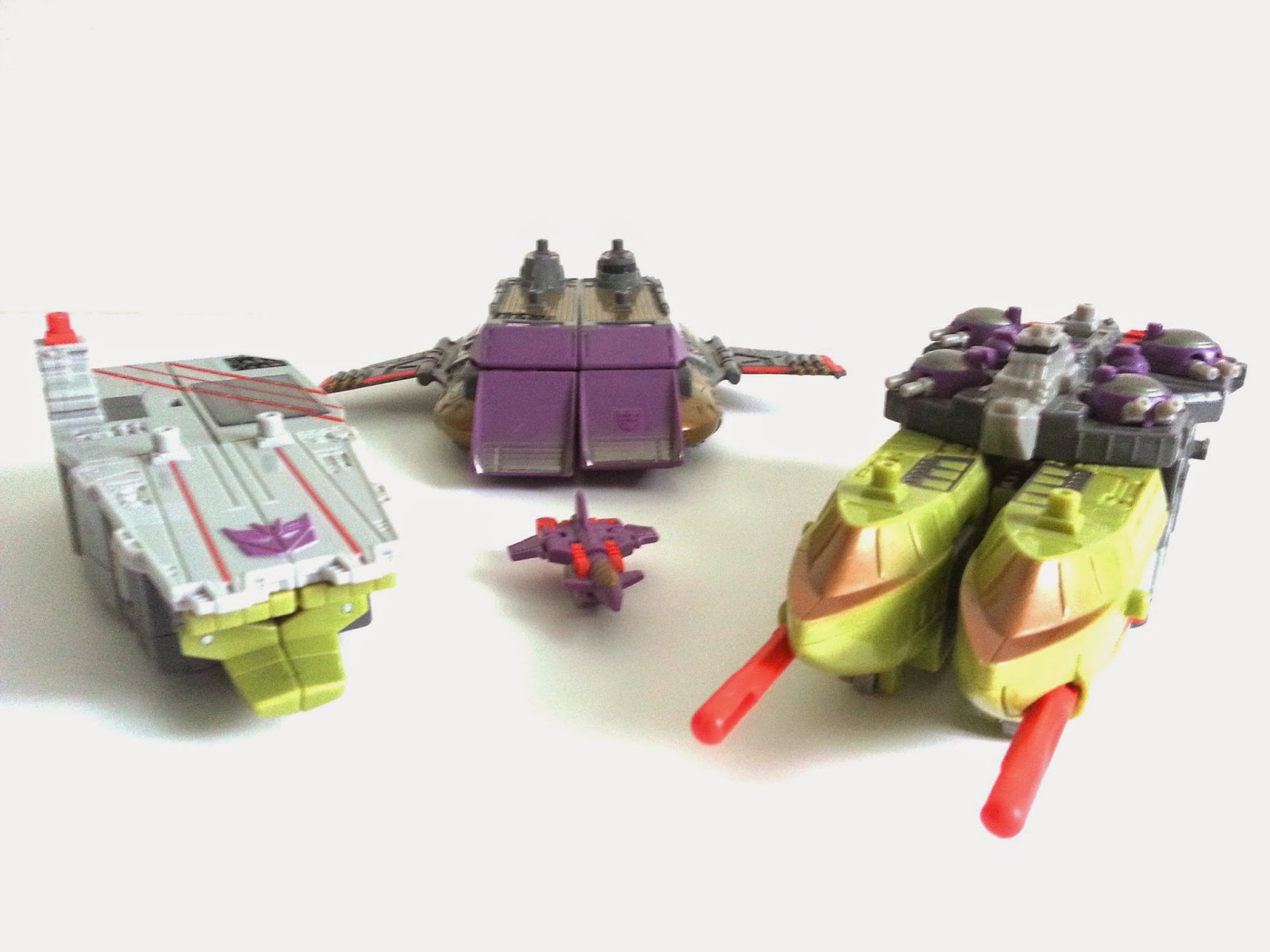 He's a totally solid figure standing tall and looking mean.  If you ever saw him on the cartoon when you heard "TIDAL WAAAAVE" you knew the Autobots were in some deep shit.   He's got a no-nonsense face with some beautiful paint detailing on his command consoles, the bridges, the (movable and poseable) gun turrets and the nicely articulated hands.  Although I far and away prefer the Takara (if you can even find it because the only stuff I've seen on aftermarket sights is the KO Sono Kong Korean models) paint apps, this guy does well with the colors and works.  There is also a feature that allows Armada Galvatron or Megatron to combine with him AND which isn't advertised is that his points of connections are also compatible with Cybertron Megatron and Galvatron, even Leo Prime as well for added weaponry.  None of it looks like it makes one lick of sense but its an option if you ever get curious with a couple of hundred dollars worth of figures. :) 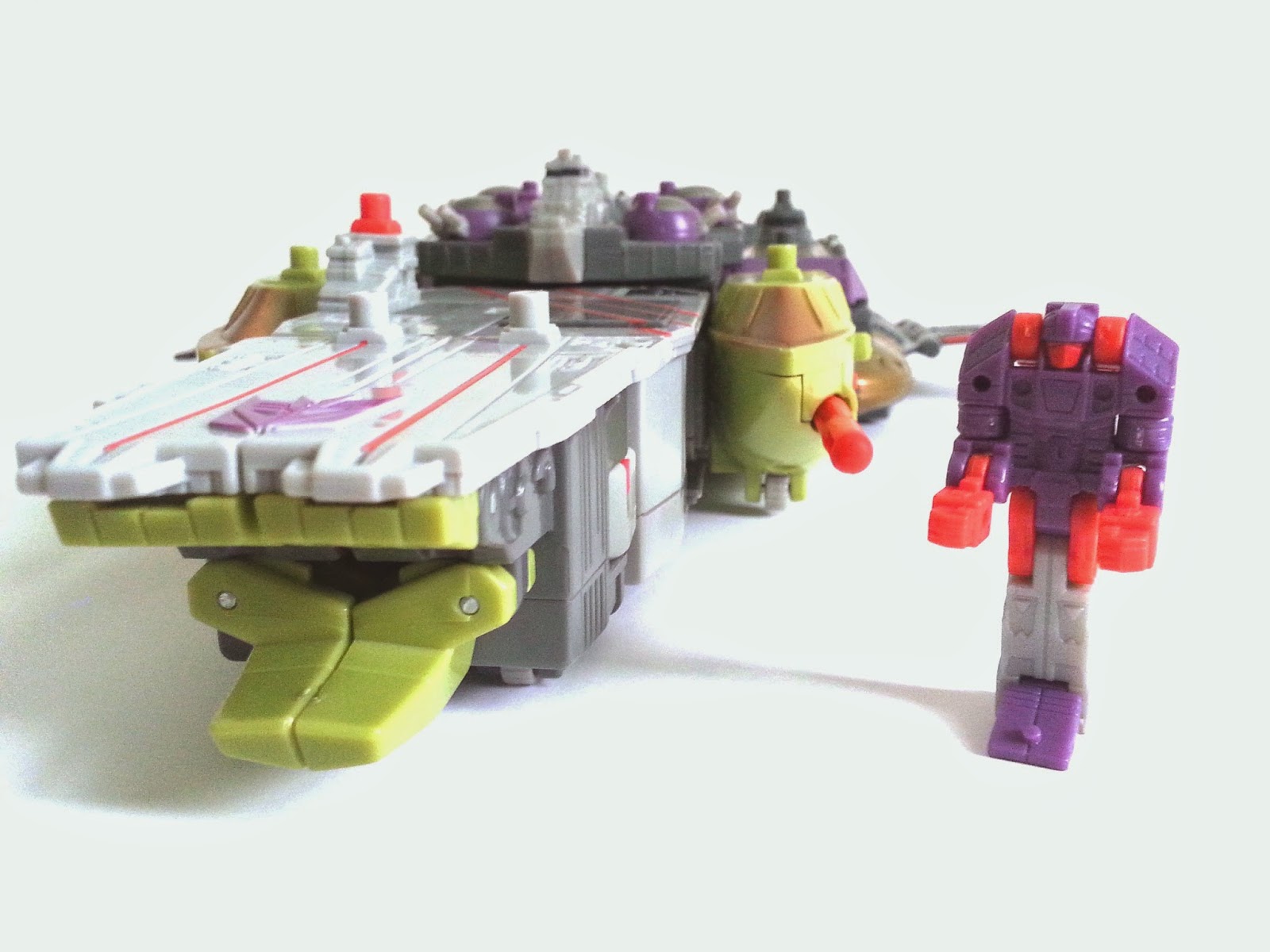 The molding is great with nice details like the deck of the aircraft carrier, the grooves on the pontoon boats and the gold windows on the green command stations.  Again, his face takes it away and looks so much like a cartoon G1 combiner face and I absolutely love it.   He has nice articulation for such a big figure with movable guns, rotating chest place, bendable knees...his head does not move however...mer. There's also a feature where you plug Ramjet into the chest and it makes all the guns pivot and there are at least two hidden compartments on the ships to hide and store minicons as well as a fold out minicon command center where you can park multiples.  There's actually a minicon sea team from the MD series that matched his color and were originally directly designed for him however they were released state-side with a burgundy color and don't really got with him all that well for the U.S. version.  Speaking of minicons, lastly I'll touch on Ramjet.  He's a standard little  mini seeker mold with a unfolding fuselage, flip back conehead and clever flip out tail rudders that turn into his movable hands.  Decent three tone paint apps and a little blank faced mug on him.  Overall, nice little extra.

All in all, great huge figure that definitely fits in with the biggies and would look great next to Predaking or Vector Prime.