I picked this small set up a few weeks back at my local Target and have been meaning to do something with these guys.  I originally wanted to pick up Swerve, Tailgate and Shrapnel...oh right, Skrapnel (whatever).  So far, this has been a bit hard. 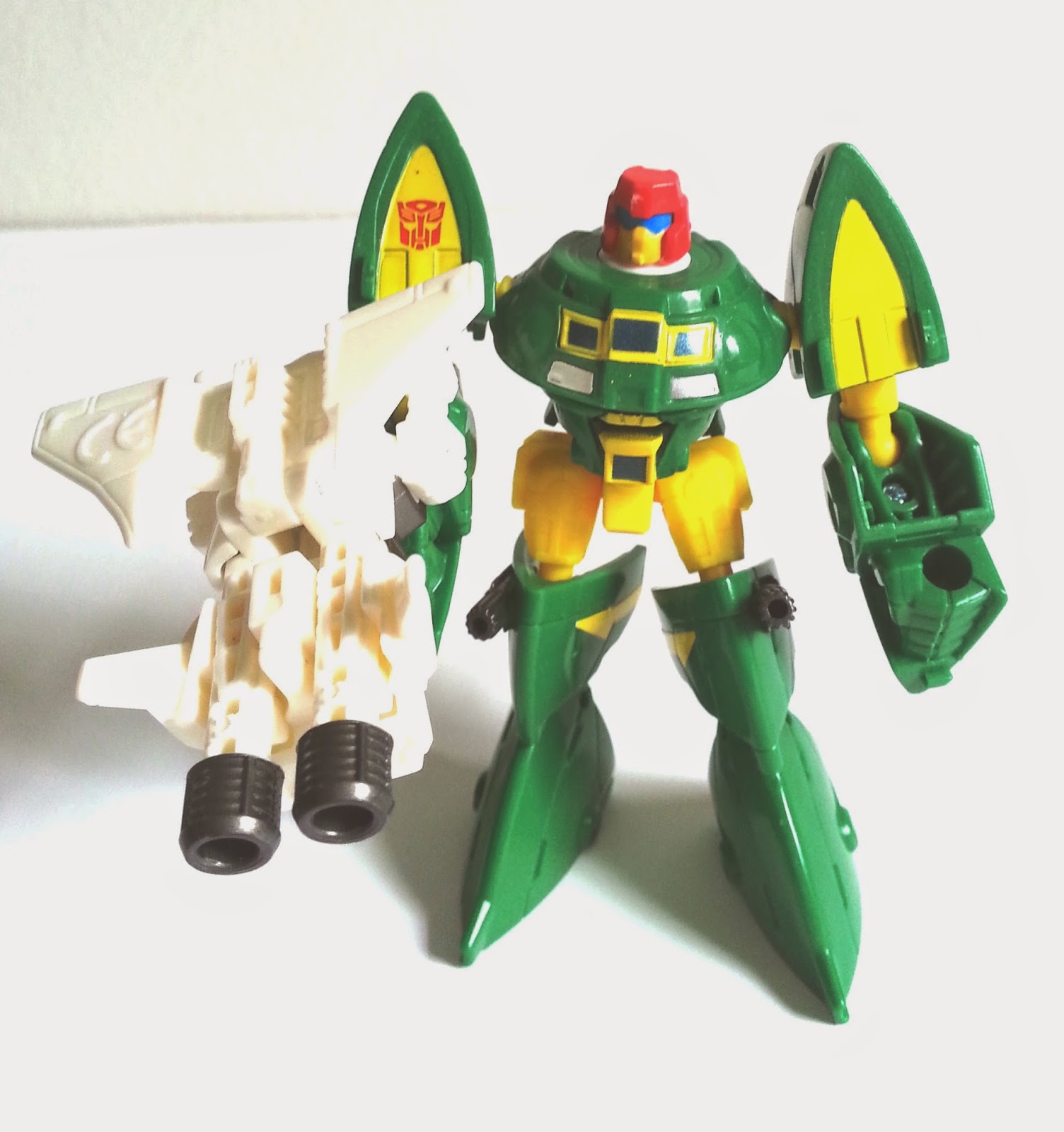 Sufficed to say, the newer generations legends class figures are rare as hell to find.  I actually HELD a Swerve and Flanker in my hand and put it back on the shelf thinking...ah, well the fact that he's sitting in Target means we're done with the Starscream, Megatron, Bumblebee, Optimus waves that have been pegwarming for a year now...to my chagrin only discovered on my next visit with intent to buy that not only Swerve was long gone but THREE racks were filled with Optimus Legends figures....which have sat now for about a month. 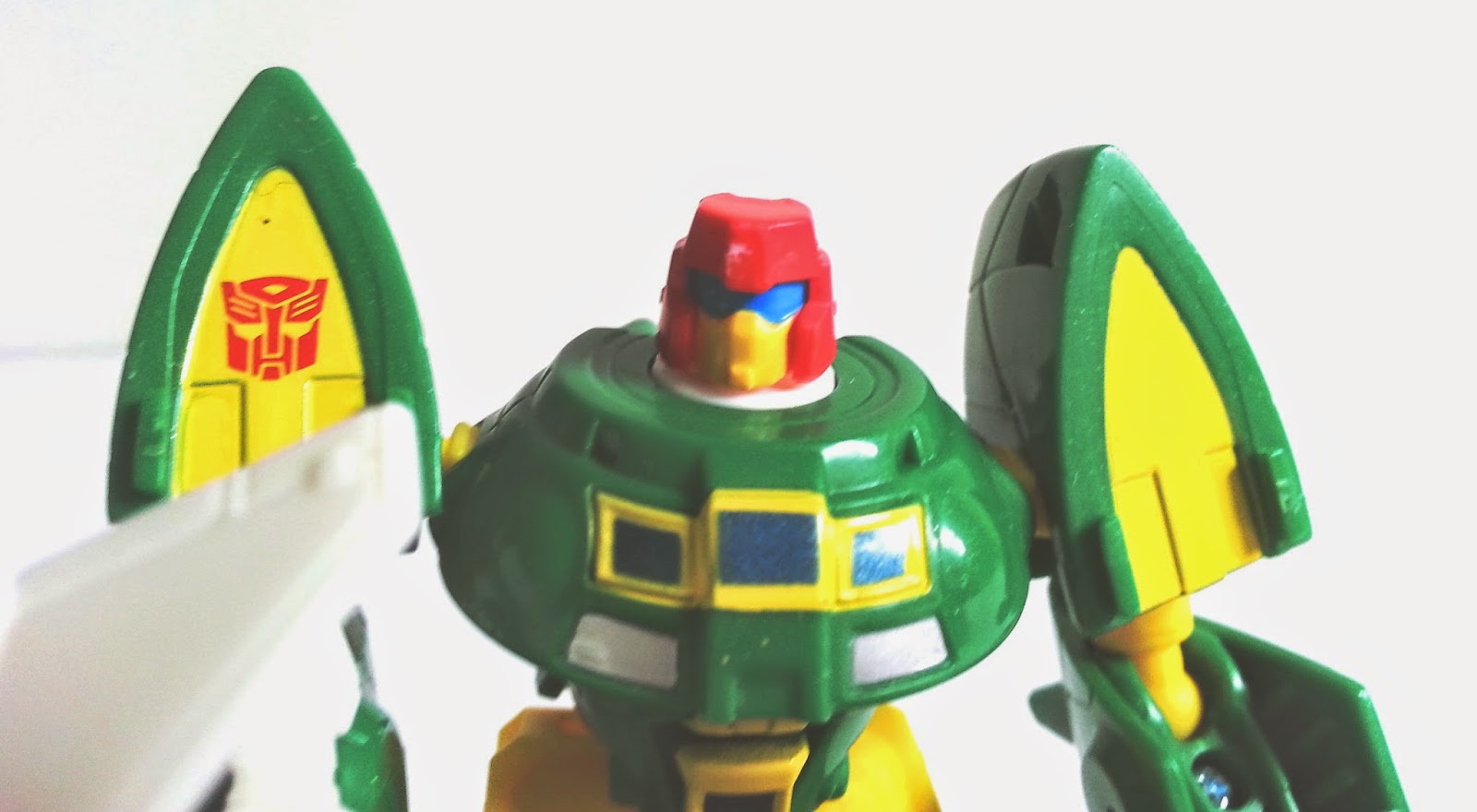 Seriosuly (mini-rant) but again, Hasbro, why do you have this ball-itching quality to compulsively clog your toy lines with pegwarmers at every turn while refusing to properly distribute lines of figures people want...first of all...NOBODY wants a tiny Optimus Prime that's Bumblebee sized! Let alone three racks of him.  What are you thinking? Even from a little kid's perspective..."Hmmm...do I want a tiny little OP or this nice sized chromed out one with a full sized Grimlock for fifteen extra dollars or a nice foot tall AoE figure for 5 bucks more?"  So you do this...while you develop an honestly great run of original sculpts with great paint and package art which coincide with a great IDW series and just refuse to distribute them and not carry them on your own website...but to add insult to injury state you plan to offer repaints of the exact same pegwarmers! (a la Nemesis Prime and Cliffjumper which I can only hope are ways to pawn off the overstock of wave 1 figures which would be smart but probably is incorrect)...This is on top of offering stupid "exclusive" TRU Masterpiece variants like Acid Storm who sat for a whole year and is on clearance now or (now upcoming) Sunfire.   We still haven't gotten a MP Thrust, Dirge or Ramjet which I would jump at for any of them.  Or how about the garish and tacky Gold and Transparent "year of the horse" Optimus Prime...Why not just re-releasing MP-01 that everyone is dying to get another shot at since even the KO without the trailer is going for 110.00 on ioffer.com?  Nah, let's clog the stores with a giant expensive shelf jammers while short supplying desired products like MP Soundwave and super-undersupplying MP Grimlock...honestly, did he even make it to some stores after his whole half hour that he was posted on TRU.com for sale.  TRU just pulled this shit with preorders for leader class Jetfire who was on the site for a whole 3 days before they removed the sale.  If the figure isn't even released yet, why can't the sellers just take indefinite preorders and send the numbers to the supplier for fulfillment... does Hasbro and Toy's  R Us just NOT like making money??? 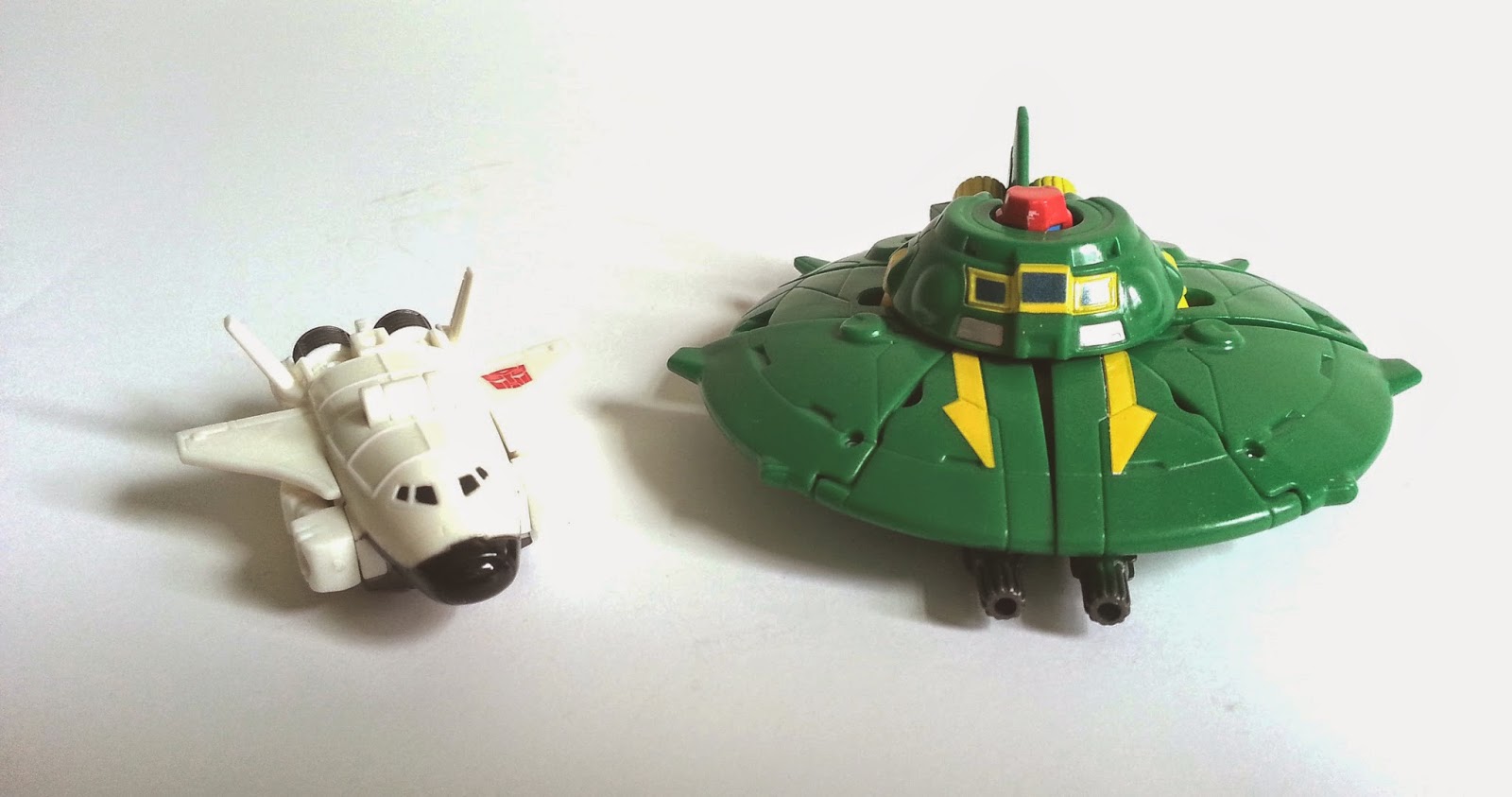 The figure is a great, albeit, super hard to find Legends Class figure. The Universe line also put out a remake of this cool minibot but I just never felt like shelling the 20 plus on him on ebay.  This little guy is a perfect update of the original G1 version that really left much to be desired.  I know Takara and Hasbro were working with what undiscerning buyers deemed acceptable back in the 80's hence such an awkward little original figure but this guy is truly an Action figure meaning you can pose him and he has positionable arms, legs and waist!  The first guy as with many of the G1 line could do just about one thing in bot mode...stand up straight and/or point a gun if he was packed with on and has a peghole in his hand which wasn't always the case. 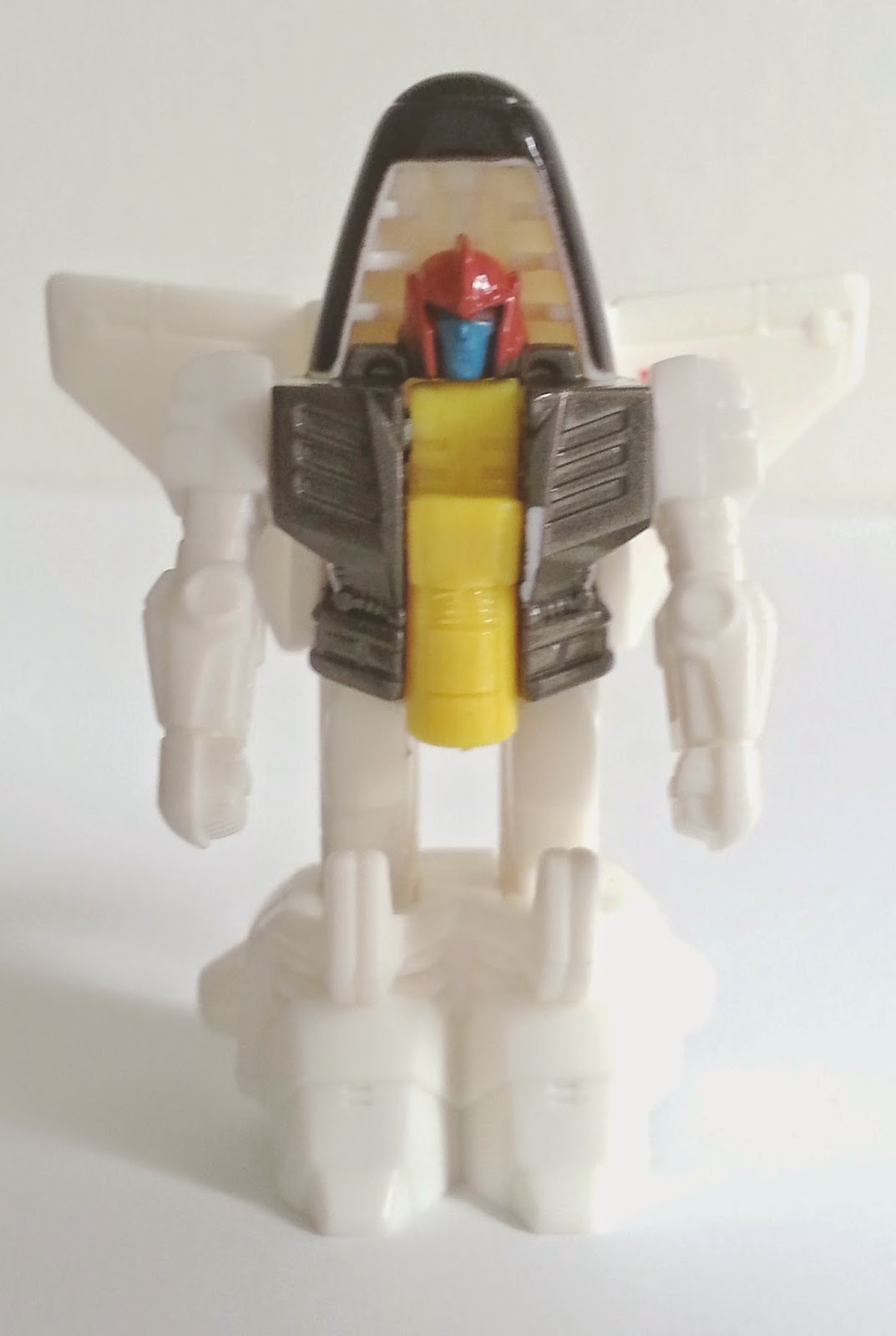 This version of Cosmos has an added bonus, he's also a very small targetmaster as he is packed with a cannon Targetmaster named Payload who transforms into a space shuttle which is an awesome touch I love with this new line of Legends.  He's simple but detailed and makes for a nice extra addition with an almost too simple transformation between weapon, bot and ship but nothing out of the ordinary for a mini-con or micromaster. 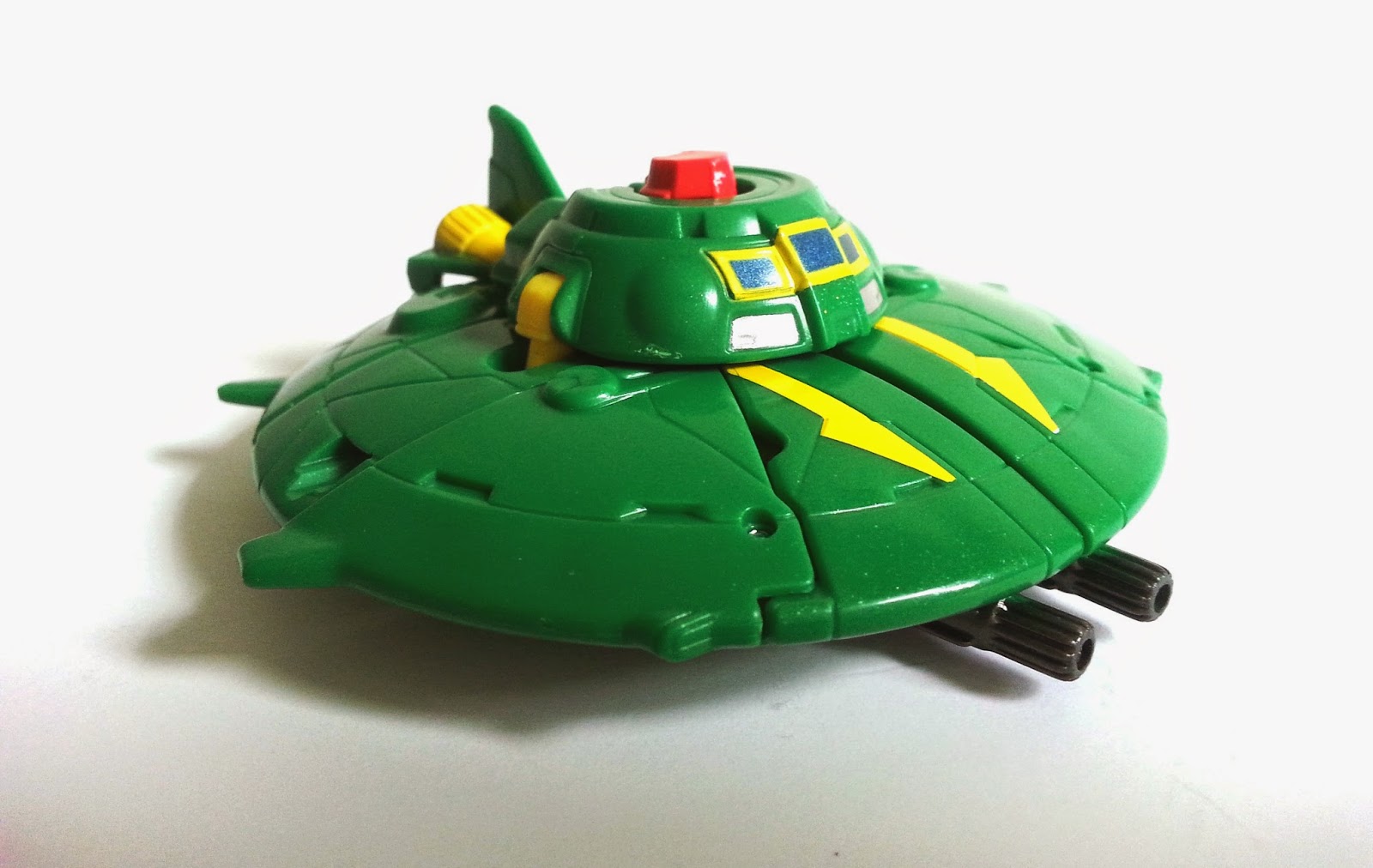 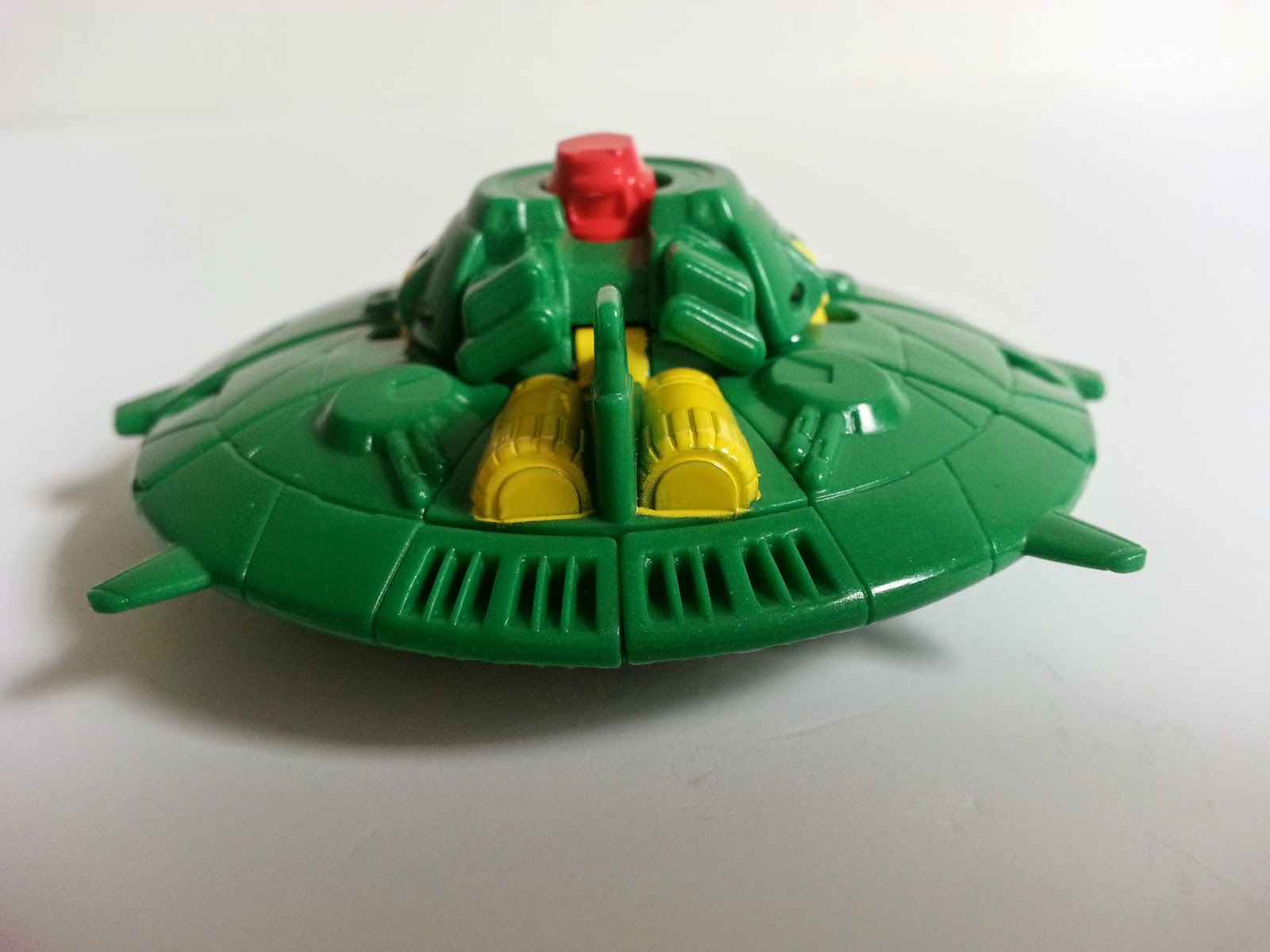 Figure-wise, Cosmos is a great build with a lot of articulation for a figure his size, great paint detailing and tons of grooves, engine detailing, and paneling on his ship mold.  The ship has some cool grey cannons on the bottom, three windows on the front, a tail rudder with tow yellow engines.  Snazzy. 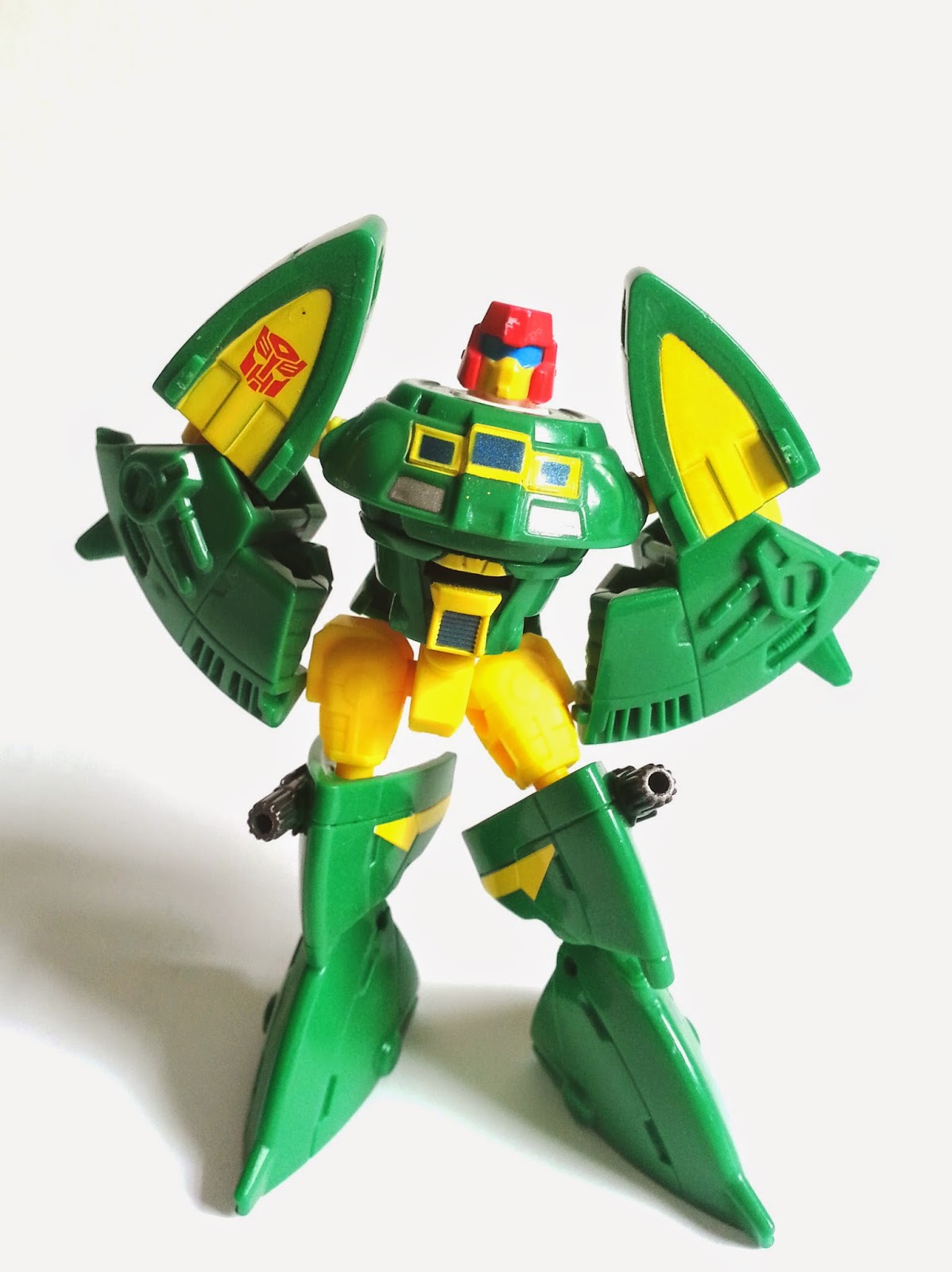 In Bot-mode, he has nice sturdy hands and feet with ball jointed legs, a rotating waist and articulation at the elbows and knees.  For a little guy, he looks like he can pack a punch.  His paint is very nice with bright yellows and greens with some extra care put into his face. (as expressionless as it is)  Even payload has a couple colors in there with nice attention to detail, especially on his ships front window paneling. 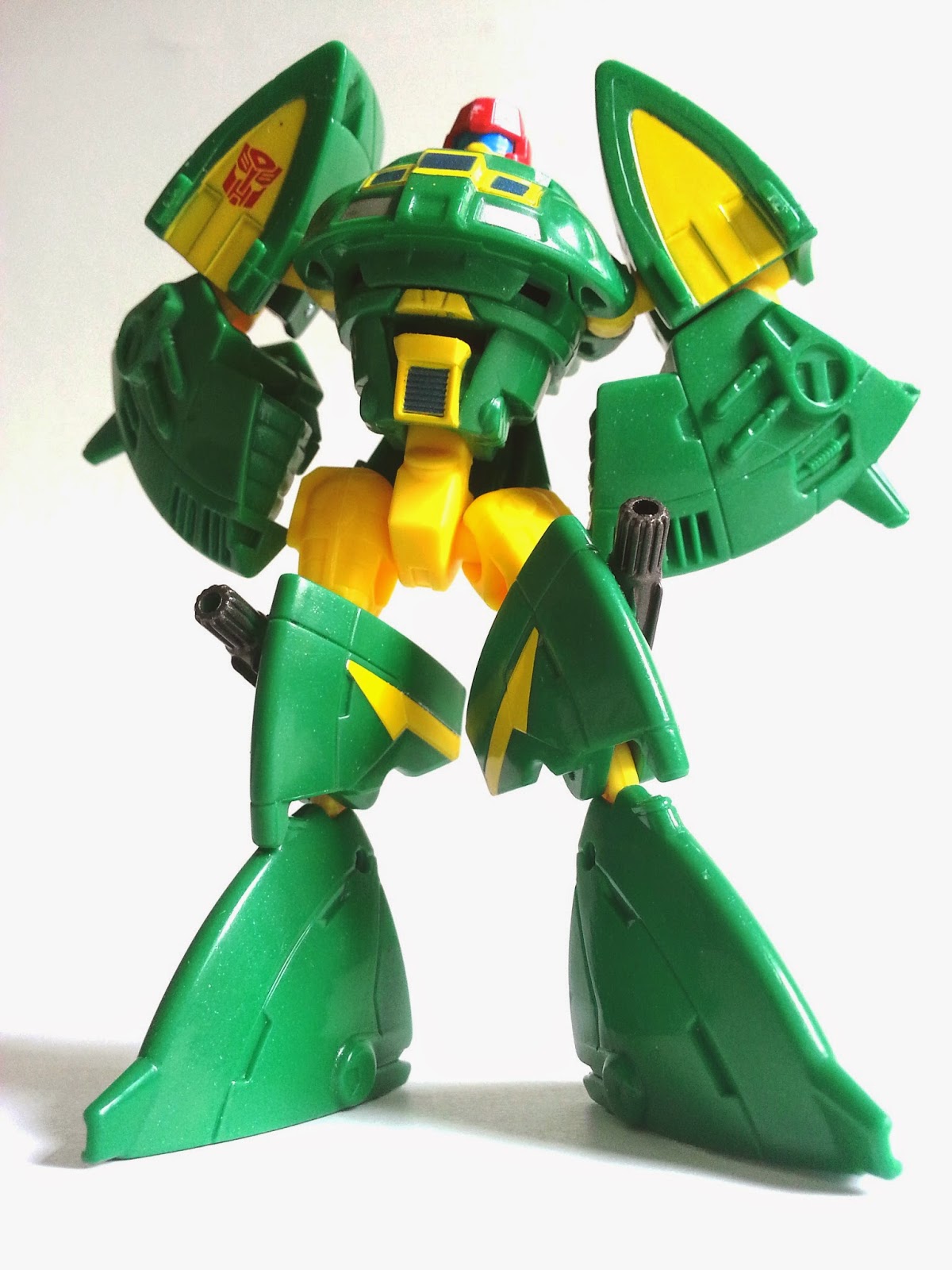 If you can find this pair, grab them up or prepare to get fleeced on Evil-bay.