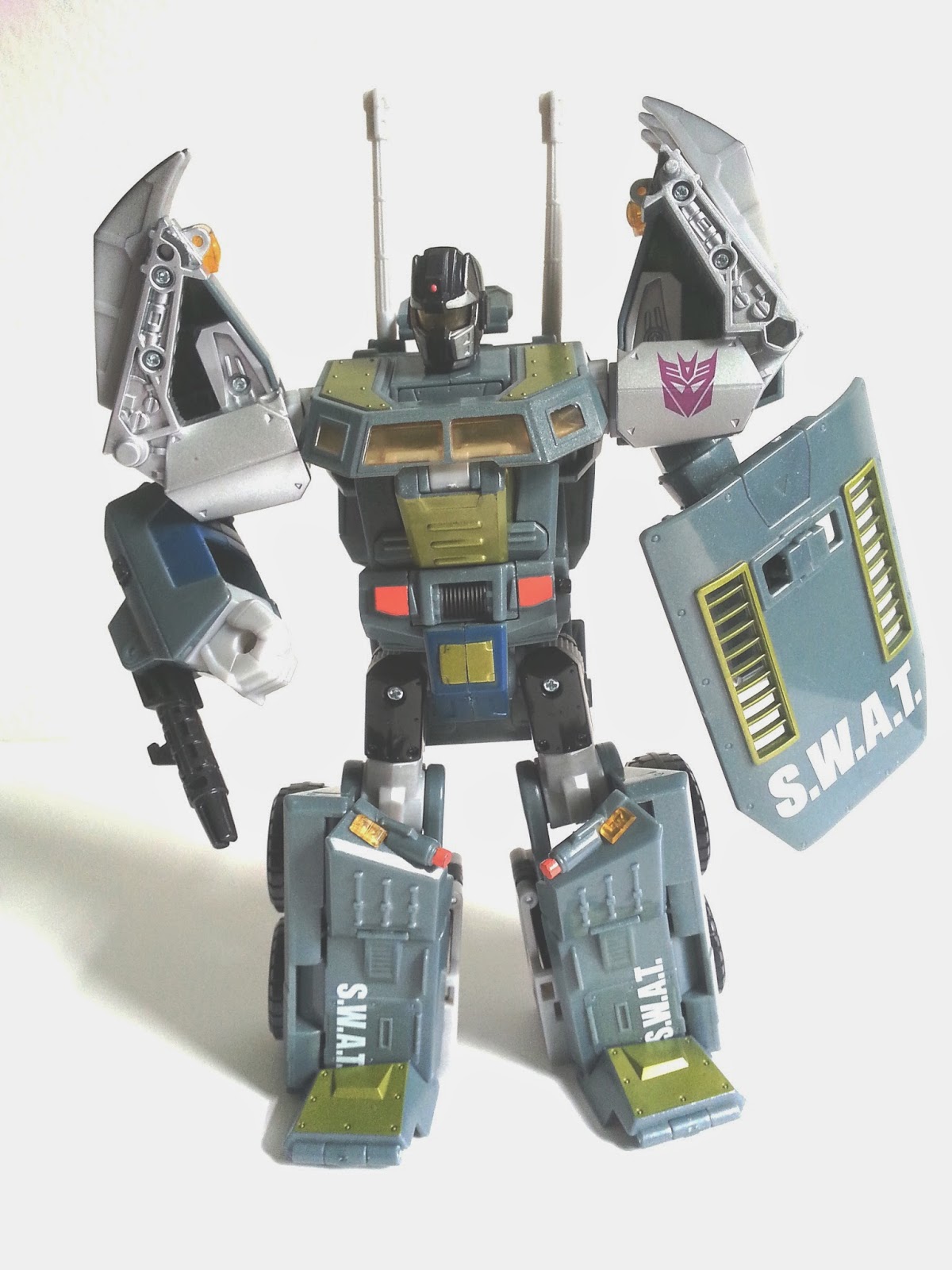 Here, we are looking at 2008's Ultra Class Onslaught.  He was fashioned into a larger commander bot with serious armament and intimidating size after a smaller version of him was created for the combiner Combaticon set of Bruticus Maximus also in the Universe toy line. 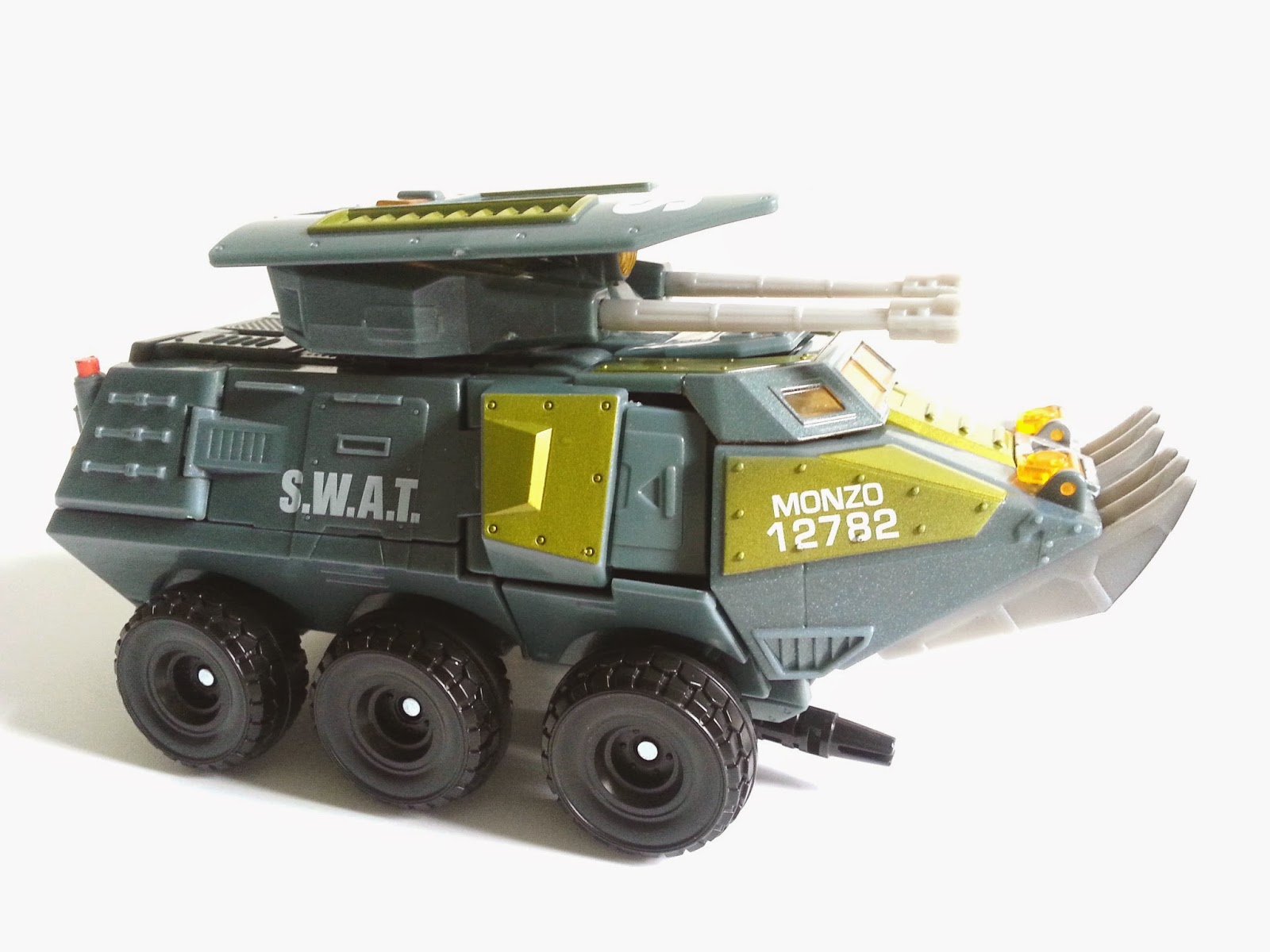 Instead of being a flatbed military truck with mobile artillery gun, he is now an armored tactical S.W.A.T. vehicle.  The translation works pretty well as he retains major qualities like big tires, a double barreled cannon, similar headsculpt and color scheme.  He works very well for me and I wish they released his buddies on this scale to make an Ultra Combiner based on these molds.  I would love to see a Ultra class Swindle, Brawl or Vortex.  The stuff coming from Warbotron in this department is leaving little to be desired...seriously check out Heavy Noisy or Sly Strike and tell me those aren't dead on G1 faces.  (Is it possible for something in 2014 to look more "G1" than the original G1?) 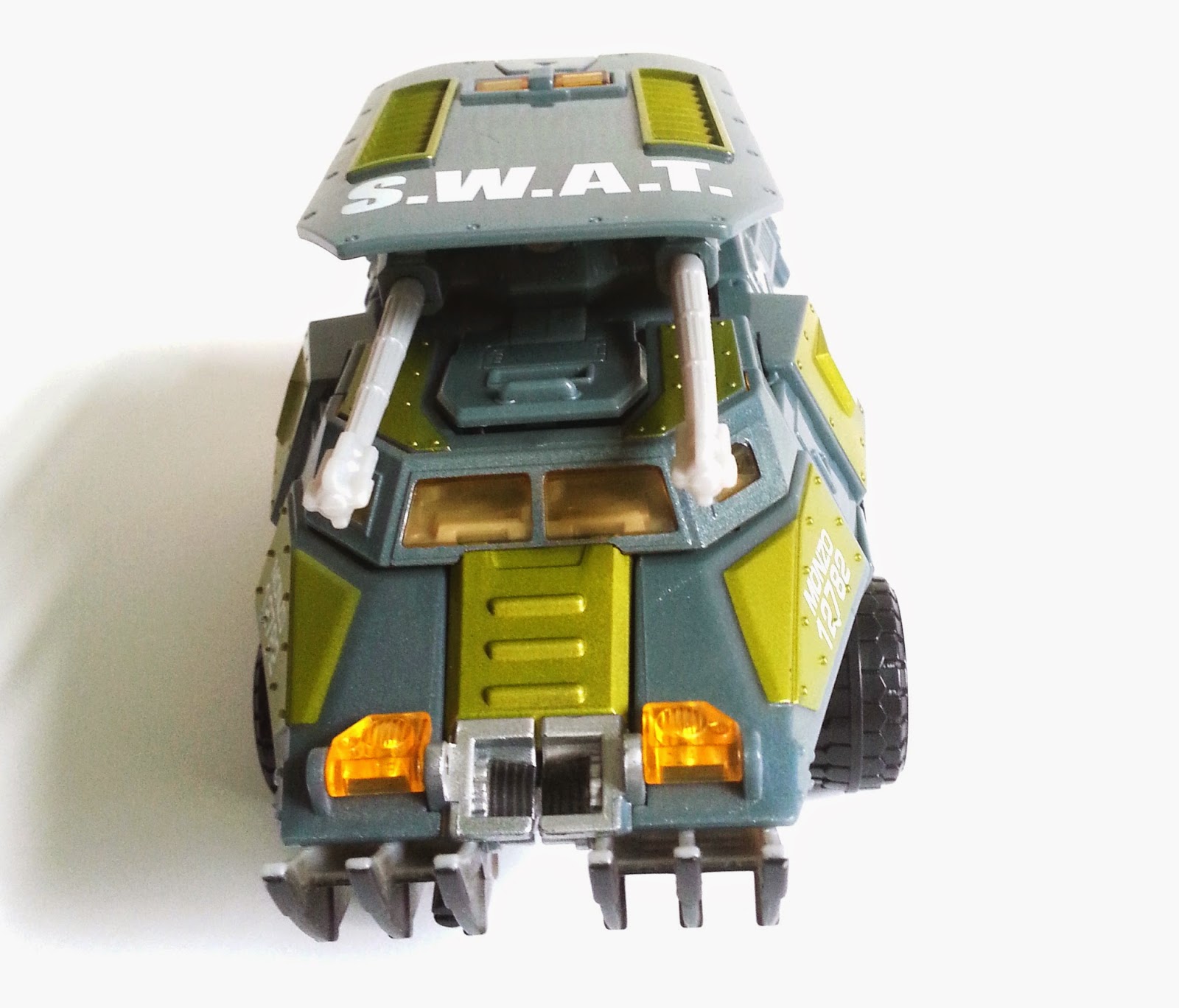 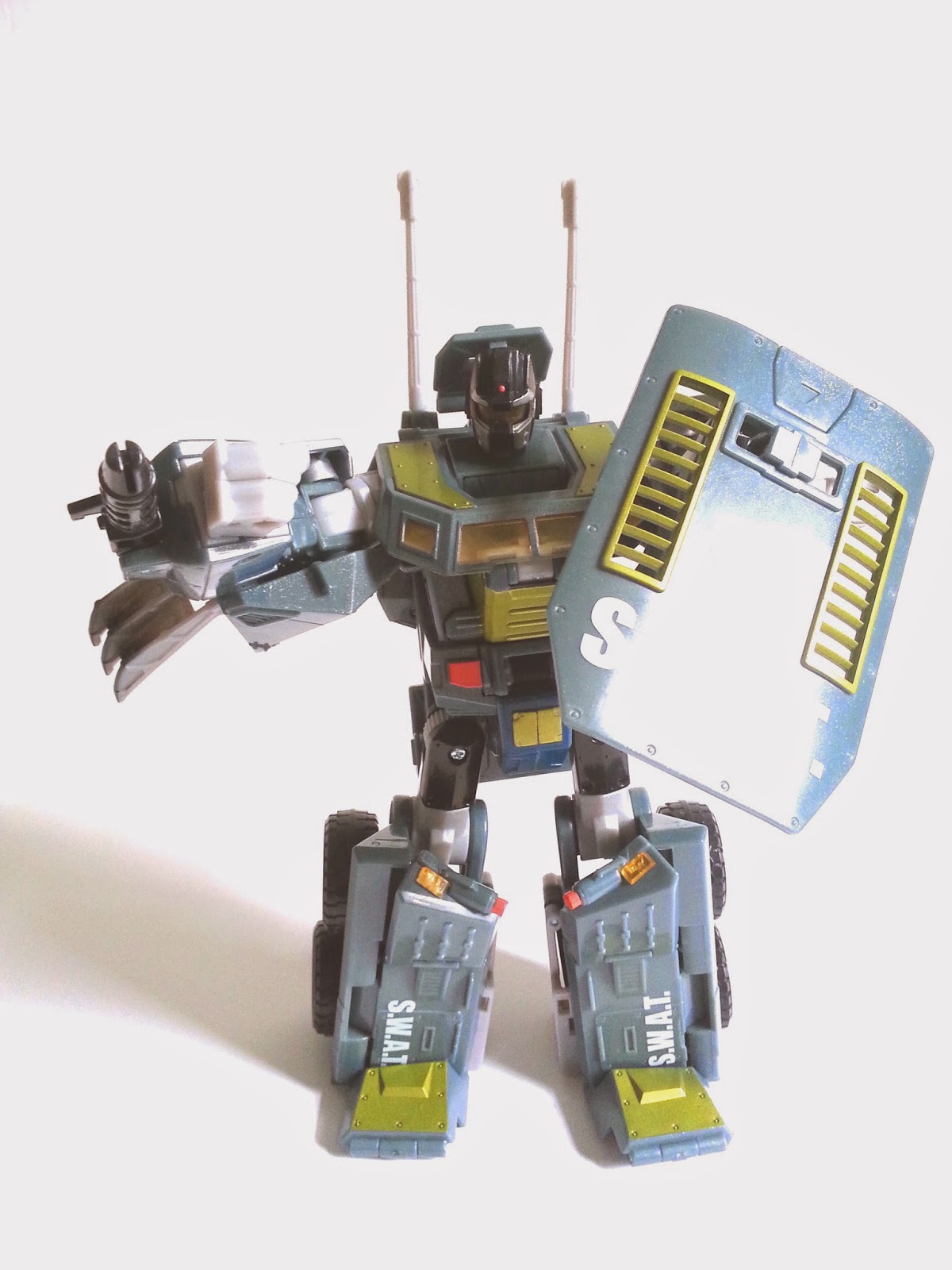 He combines fairly easy with a fold out read section of wheels that converge to his feet with armor plating with bendable knees and hip joints.  He has electronic features that make a blaster noise, a crushing noise and a siren noise. I scored an early version that had a bug in the sound that only lets it play in 1 second bursts so there is no prolonged sounds of machine gun or sirens as was intended and later released in the U.S and Japanese versions.  Point of note, the Takara version also had colors that directly matched the original G1 toy while these seem a bit darker. 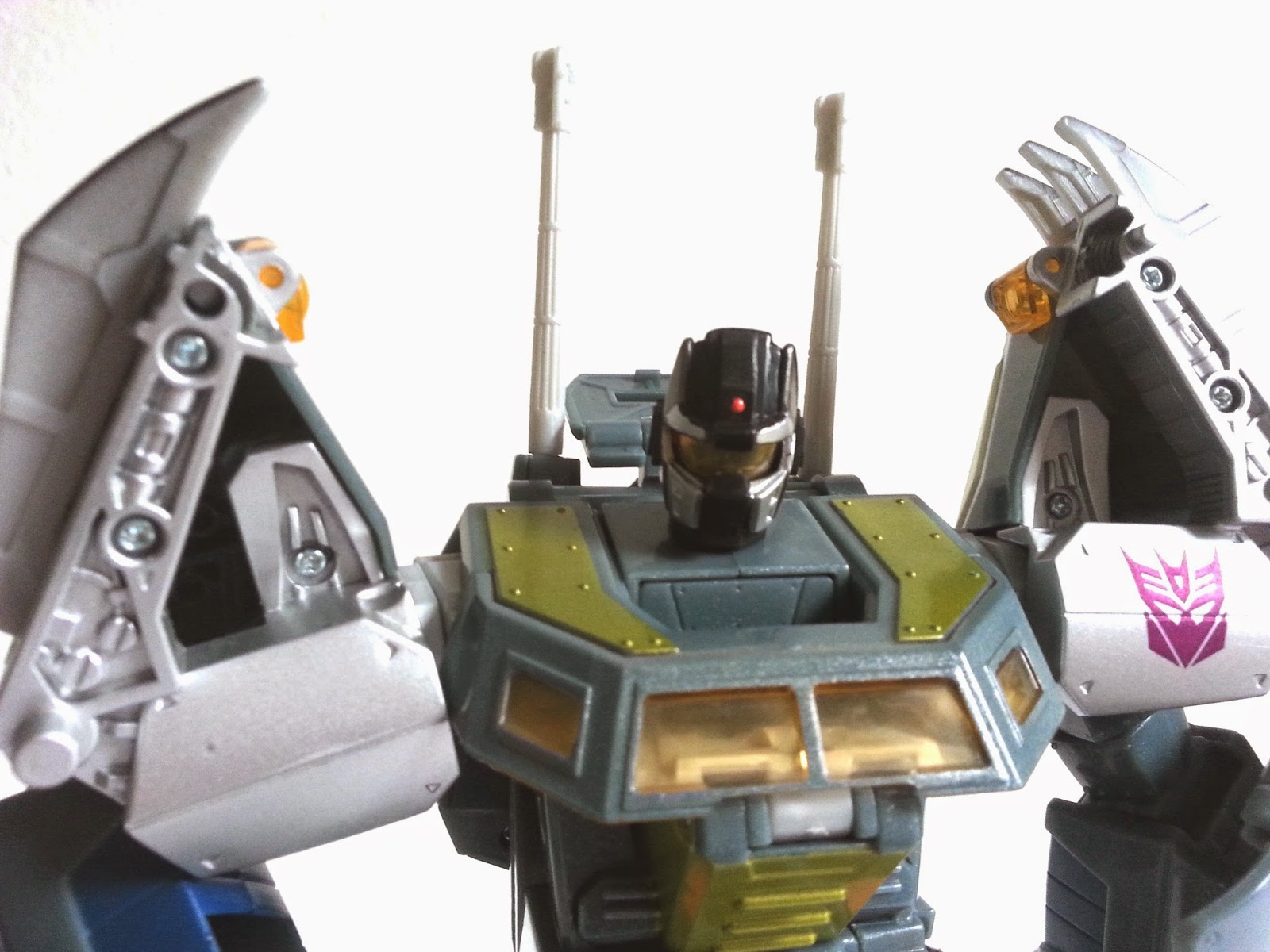 He's got a nice headsculpt with light up eyes on a battery jointed arms and shoulders with a flip out cannon on his right wrist and a flip out holder on his left to hold a detachable S.W.A.T. shield. (A feature I absolutely love)  It makes him look like a freaking gladiator in my opinion and it seriously rules.  His cannon is essentially not functioning on his back and only really works if you make him bend over.  I tried and he really cannot do it without looking totally stupid and needing a hand to prop him up.  In his vehicle mode, he is meant to look armored and bulky and it works well.  His wrist gun is belly mounted and he has two flip down spiked battering devices hinged on the helm of the vehicle.  While the shield can be positioned onto the top for an armored roof, it doesn't feel like it belongs there if they are trying to make this look realistic.  I find with a nice suspension of disbelief put into place, you can make the design work. 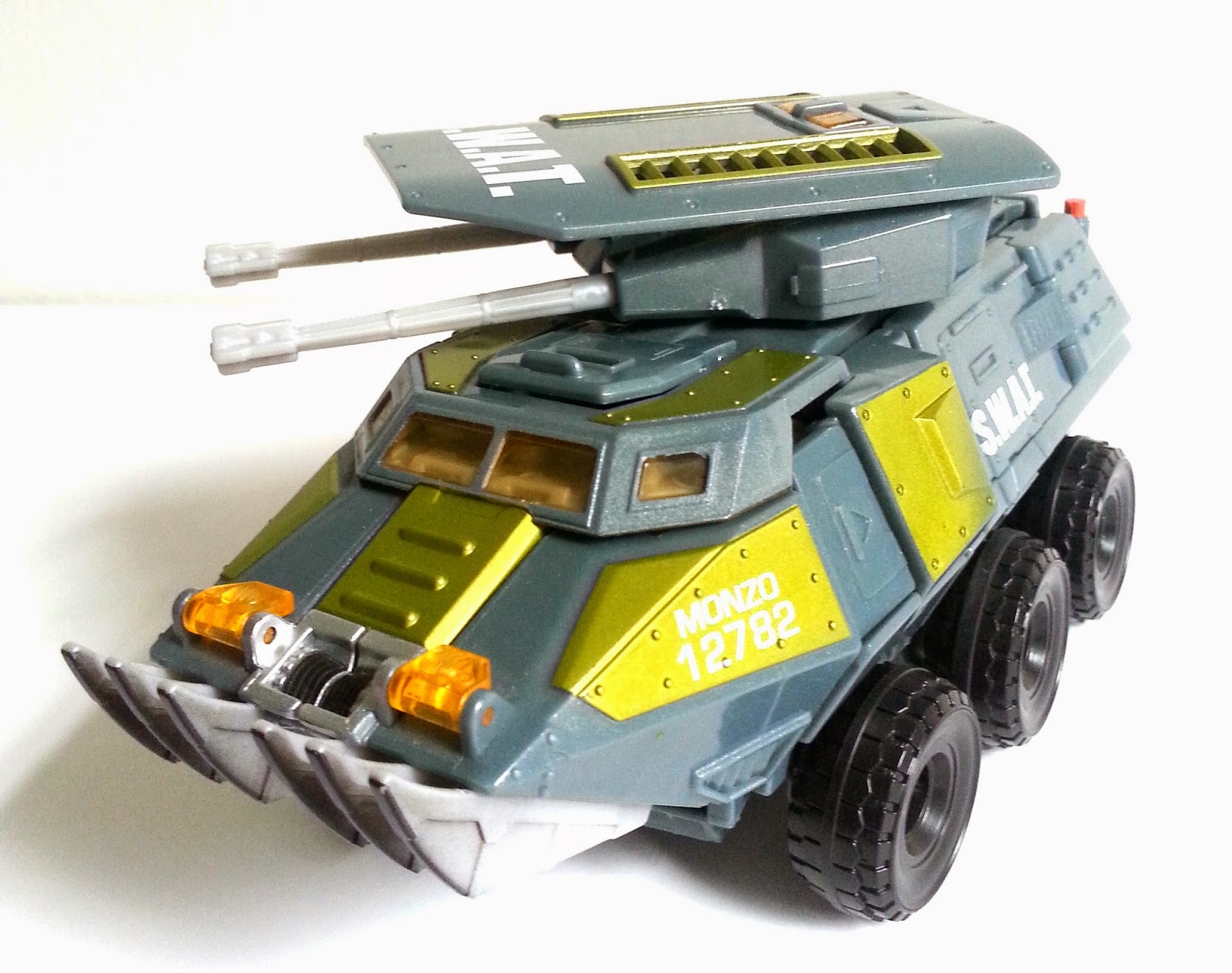 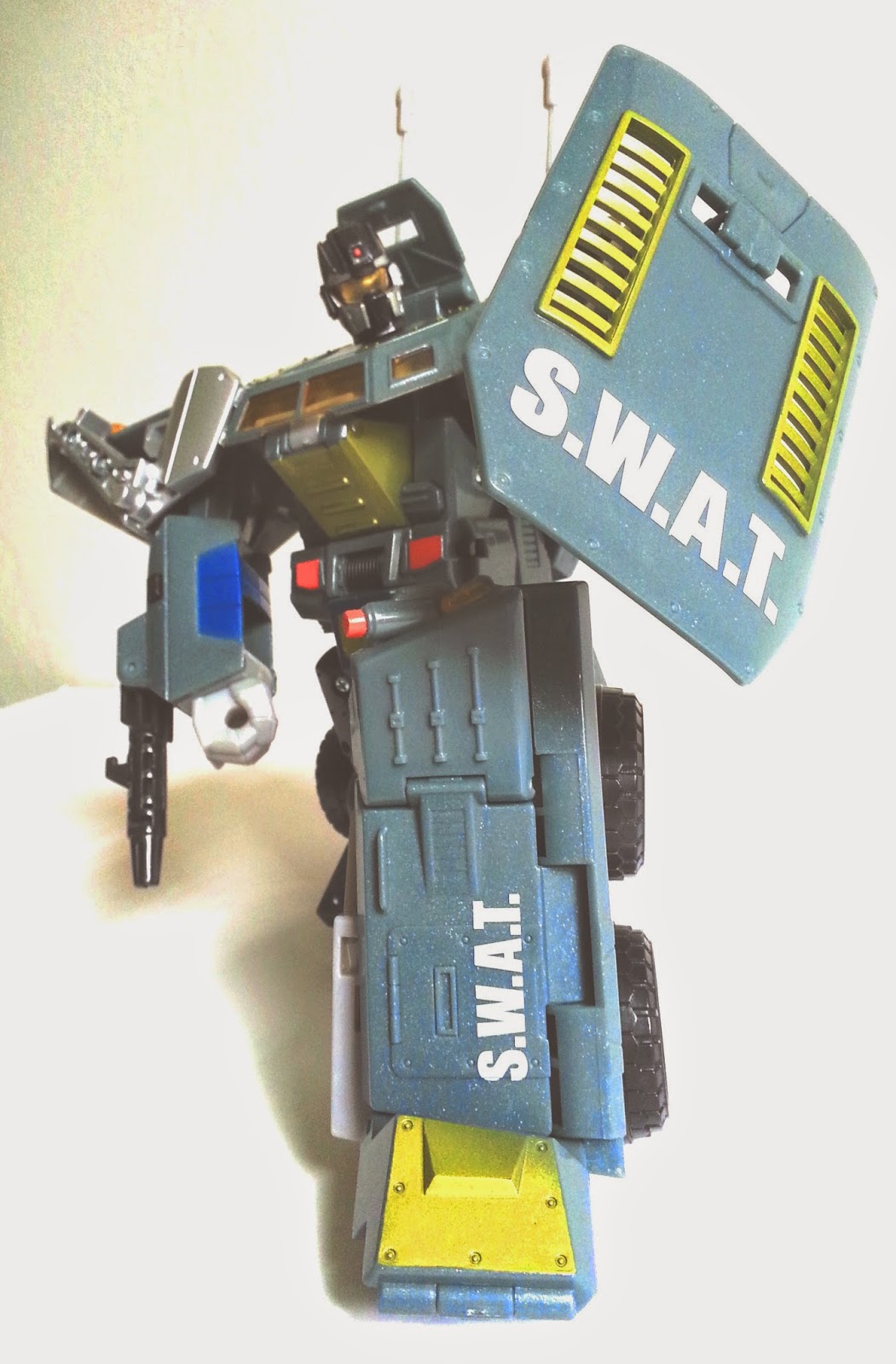 This guy truly reinvents Onslaught and lives up to his name....Just wish his main cannon could be better utilized in bot mode.
Posted by Mr. R at 5:47 PM