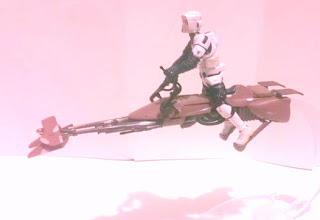 I'm going to wrap up my weekend with a review of one of my favorite Star Wars vehicles from the series.  You can even test my love as the classic version  was my absolute first toy review.  This is a fine number I found at my local TRU today which almost put me in shock to see something new at Toys R Us!  Low and behold,  it's the new Speeder Bike from the movie heroes line.

I really must say, this is something that gets Hasbro way out of the hole with me (for now). Shortpacks and understocking aside, this is a great example of the company really delivering on exquisite detail and amazing touches of craftsmanship from start to finish with this model. 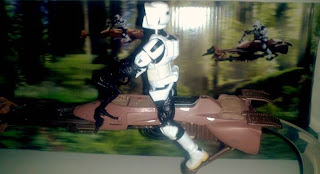 It comes in a very nice and compact package with a great image of a Scout on the front along with a clear plastic window showing the toy in an action stance with a nice forest scene in the background. It has a very adequate scene of the toy highlighting its various features on the back along with the pack in tri-pod cannon. 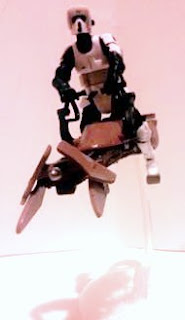 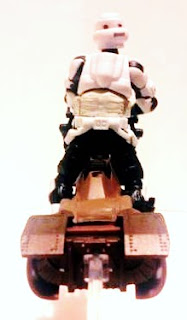 Once out of the box, I was able to get a better look at this awesome vehicle. It is a totally spot-on brand new molded version of the Speeder Bike from return of the Jedi. If you want something that looks like the real deal, this is it. Every little issue or problem from the earlier Kenner and Power of the Force versions and later repacks is fixed. The clunky pedals, the weird upwards hand controls, the "exploding" feature; all gone and fixed. This now has movie-accurate pedals and sideways hand controls. The exploding feature and spring controlled exhaust flaps are gone and replaced with sturdy, connected adjustable flaps that you can position however you want. There also is a two pieced clear stand that hooks into the back of bike to make it look like it's flying. 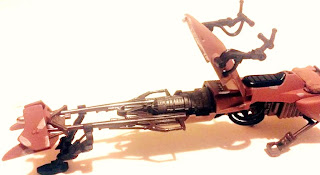 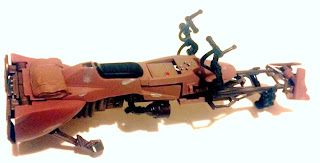 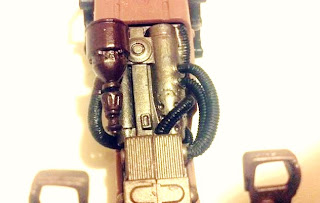 There is a nice opening engine compartment that's a totally new feature. If you examine the undercarriage's tubing, it's actually made of rubber to simulate the feel of the cables! It's so nice to see them find things to add to such an iconic mainstay vehicle that's been made and remade for three decades. 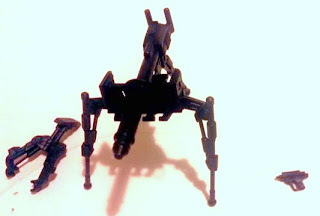 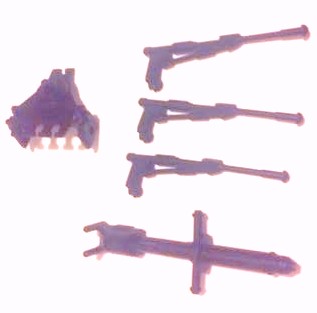 There also is a nice three-legged cannon that reminds me of the Imperial tri-pod cannon from the 1980 Empire Strikes Back (Mini-rigs). It's a decent feature that can be made into a mobile attack weapon that attaches to the bottom of the speeder for customization. 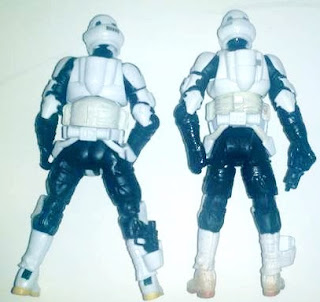 Included with the bike and cannon is an additional Biker Scout figure who is a brand new remold with broader legs to sit on the bike better. I checked with the Original Trilogy Collection figure I have (who is a lot more detailed paint wise) and he fits on the bike almost as good. In addition to the broad legged stance and ball jointed hips, he also has a double ball jointed nice so his head can be positioned perfectly for riding the speeder. 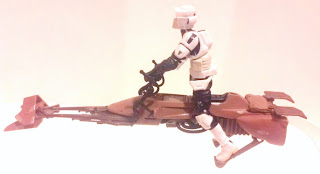 If you can find this vehicle, buy it!  Totally worth it and an amazing display piece.
Posted by Mr. R at 8:48 PM