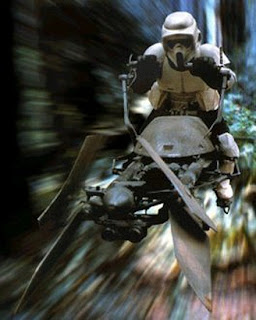 What better way to start out my reviews than to begin with my first case of a “toy that got away. ”  In my intro post, I talked briefly about the thrill I had at 6 years old finding a Speeder Bike on the shelf at Wed Friedman’s Dept Store in Scranton.  It was on clearance and the only remnant of Star Wars stuff left considering the line was discontinued since I was 3.  By this point, I was fairly obsessed with the Star Wars trilogy, most particularly Return of the Jedi,  the parts particularly with the Sarlaac Pit and the Speeder Bikes blew my young mind.  I loved the way the speeders and the skiffs moved and flew so realistically and the sounds they made.  The sleek designs were so neat and everything from the TIE interceptors to the Shuttles were cool as hell.  From then on, I couldn’t walk through the woods without immediately thinking, “Endor.” 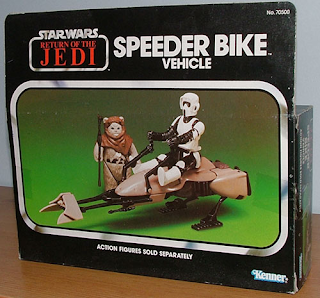 
So anyway, I begged my dad for the speeder, he bought it and I was totally in love with it.  I loved the picture on the box, the instruction illustrations and the little booklet that came with it.  I can remember studying the pictures of those toys I’d never be able to see in stores and the awesome picture of the Emperor’s throne room on the cover.  I remember thinking how cool the dioramas were in the later pages and how neat the Y-Wing and Ewok Village Playset looked.  I think I even wrote to Kenner to find out if they would send me any stuff, sadly to no avail.  The only and obvious problem of buying  a sole vehicle from a discontinued toy line was “now what?”  I couldn’t get any figures, I didn’t even know where I’d be able to see figures to put next to the bike. 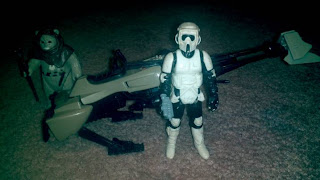 My recreation of said above box art


I then went to my grandad’s house to see my uncle Brian who was and still is a Star Wars fanatic.  He was impressed with my find and low and behold, he had the entire set of Kenner figures and then some.  Out came my first Star Wars guy for free to go with my Speeder!  Granted, it was a Stormtrooper and not a Scout but I couldn’t care less.  I played the hell out  with this toy until a week later when I had it outside at the same house and somehow it went “missing” when I had to go inside to eat.    I was so bummed out but my uncle ended up giving me a ton more guys, 4 more stormtroopers, a rebel hoth trooper, a tie fighter pilot, an imperial commander, FX-7, an R2-D2, general madine, nein numb, an AT-ST pilot and Barada!  All of which I still have (cept the stormies)  I now had my first bunch of figures to play with and I was now an official Star Wars collector at 6 years old! 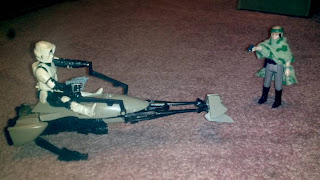 
So let’s get down to this piece, it just emanates classic Star Wars feel.  It’s a cool looking toy but is a bit delicate.  The one I kitbashed together from spare parts barely stays together and is exclusively a show piece.  The sculpt is really a one of quality, from the tubing on the underbelly, the little painted buttons on the control panel, the exhaust fans, the bolts on the flaps.  Every inch is utilized in full attention and detail.  The color pretty right on as well, they remade this vehicle for the POTF line in 1996 and they used the exact same sculpt but just updated the paint proving that if the design wasn't broke, why fix it?  The sticker feature they added was nice but the color I found was a bit too dark as pictued below.  Anyway, I'd love to see a remake for the modern vintage collection which I'm sure we'll see when Return of the Jedi 3d comes out. 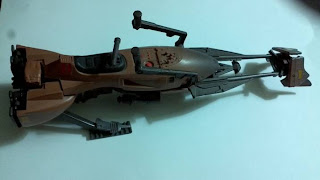 Back to the vintage speeder.  It had a “destructibility feature” added onto it where you pushed the little pack on the rear and it blew into three pieces.  This was a fitting feature considering what death traps these things were in the movies. In addition, for such a small vehicle, it had a  bunch of moving parts; adjustable handle bars, a moveable little blaster on the undercarriage and moving foot pedals.  It also had a neat feature where the thruster flaps raised as the pedals were lifted like in the movie.  A cool little detail which they really didn’t have to do however the flaps are notoriously easily lost pieces and are often found missing or broken as they had really tiny delicate set of twin hook tabs which secured the flaps to the fuselage of the bike.  Mine are in decent shape but they tend to fall off even without any damage to either flap. 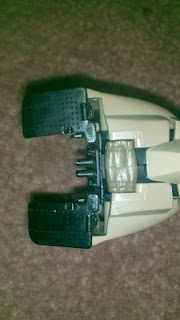 Detail of Thruster flaps and the "explosion" trigger pack

My only issue is the lack of articulation with the general kenner figures from the vintage line.    Because of this, they tend to sit very awkwardly atop their bikes (as shown in the above pic)  and fall off even with the handle grips and spring-held crotch bar to keep them in place.   They tried to fix this with the POTF model but limits in articulation made the driver stuck in perpectual bow-legged croutch mode.  That along with his puffed out, "he-man" chest made for a ridiculous rendition.   Overall, it’s a great piece that is a great add on to any collection but the playability factor tends to suffer due to its delicate construction. 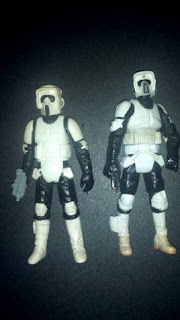 Comparison between the Vintage and Modern Imperial Biker Scouts
(The Bow-legged POTF scout is missing from this shot)
Although the modern is a superiorly made and detailed figure, the 1983 version
holds  his own...gotta love the modern's boot holster though.
Posted by Mr. R at 8:14 PM