League Assignment: Nice Place to Visit...well, I dunno about "nice"

Brian, the helmsman over at C&C shuttled this little beauty over the wire to the leaguesters:

Last week’s assignment was a challenge, so this week’s task will be a bit easier…or will it?
—
Take a trip to anywhere in pop culturedom. What fictional town, time, or world would you want to visit? So where would I visit? My wife off the bat suggested the Enterprise D or even DS9's promenade for the sci-fi in her and Downton Abbey for the Masterpiece in her. All great places to check out but not my immediate cup o tea.

I immediately kept thinking Halloween themed stuff...guess I'm in an October state of mind.  It rattled around to the Clue Mansion or the Overlook Hotel (probably since I watched both of those movies last night)...or the dreamworld in "the Cell" to poke around the head of a serial killer. 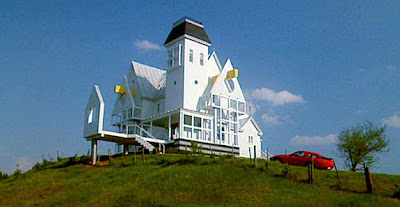 I landed on two particular picks for different reasons. First I chose the Maitland/Deetz house from Beetlejuice...need I say more?  Well, I will.  All I can say is holy hell, here's a place that knows no bounds.  You have the original contemporary, homey but still creepy decor of Adam and Barbra followed up by the avaunt guard nightmare of the Deetz family with living statues, along with black and white checkerboard everything surrounded by a hellscape lining the building only known as "Saturn" complete with Sandworms on the ground floor while your upstairs chalk-drawn doorways serve as portals to the afterlife's waiting room and a seemingly endless set of offices opening to different times, dimensions and complete with a "lost-souls" room.  I would really enjoy taking my time in this place!  For the most part, the locals seem friendly and I gotta be honest, I'm a sucker for miniatures.

My second choice is literally an endless amorphous mess.  If you ever wanted to visit a place that would keep you guessing to no end, look no further than Dark City.   Locked into a walled off hallucinatory world that changes at the will of the "Strangers" who look like a cross between the Gashlycrumbs and the Cenobites from Hellraiser, here is a place where anything is possible.  The buildings shift and morph, the limits churn and meld all to the theme of real-life film noir.  It's always night, time never moves and everyone falls asleep in unison only to awaken as different people.  I wouldn't mind being able to take a stroll to Shell Beach...if only I could find the right train.  "No days off for good behavior!"


Here are some other nice destinations on the nerd route:

Jathneil at Space for Rent takes a sci-fi trip to the Outer Rim.

Goodwill Geek was thinking the same thing I was.

Crooked Ninja is finally going to see a real Hover Board!
Posted by Mr. R at 10:47 PM