Remember when Halloween was a big deal? I mean, a BIG deal? What was the most legendary costume you ever wore? What would you dress up as this year? 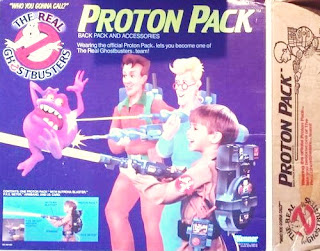 Oh boy, Oh boy, I love me some Halloween related assignments!  Brian, over at Cool and Collected has given us a nice, multi-directional road map to follow regarding Halloween Costumage!


First and foremost, the most spot-on, legendary, over-the-top costume I ever rocked was that of a Ghostbuster...a khaki-clad movie Ghostbuster to boot.  My god-father's sister-in-law ('s nephew's cousin's former room mate...i jest)  was an awesome seamstress and put together this mini jumpsuit for me.  Combined with the Kenner Proton Pack, PKE meter (the best 1:1 kid size scaled accessory every made in toy form next to Han Solo's Blaster) and Ghost Trap and goggles, I was  an envy of many fellow classmate in my school's Halloween Parade.  The best part was that at school I got to "Bust" all the ghosts in my grade who happily played along

This was the best and most favored for nerd-homage, however there were many more... Halloween was my absolute all time favorite holiday so I never took it lightly.  Here are my getups according to memory.

Clown
Ewok (without a hood...ok?)  I was one of the few who saw the Ewok Adventure before the Star Wars movies if you can imagine a frame of pre-school reference.  I still remember it being hotter than hell in that suit.
Vampire (Dracula) complete with light up vampire bat necklace, spider rings, greased on widow's peak, skeleton tipped cane... Dracula the pimp more like it.
Ghostbuster
Daniel from Karate Kid
the Grimm Reaper
Darkman...nobody knew who I was but still I was easily the only Darkman...probably in my state.
From 7th to 12th Grade I was "too cool"...whatever that means since, by no means, did I ever fit the mold of cool.

I got back into the swing of things by rocking it for all four of my college years for drunken costumed fun...
Freshmen year...Zombie
Sophomore year...The Dude
Junior year...Vietnam soldier (My wife still says John Lennon)
Senior year...Jesus (complete with thorn crown which won most realistic at two separate parties)
post college...Agent Smith

I would dress up as anything available these days...Currently I shall be Pi while my pregnant wife will wear an orange top with green ribbons in her hair...get it...pumpkin pi???  Art Art.  We've always wanted to do Mickey and Mallory Knox but I dunno if that'll ever get off the ground.

I'm a bit early this week so here are a wee bit of linkage! Jamie at Whatever I Think Of goes from Pebbles to Se7en in one post!