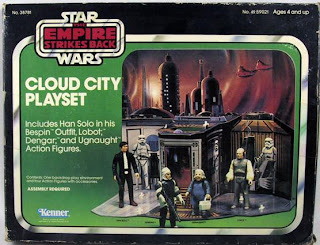 "I see a city in the clouds."  It's here where I think a lotta Star Wars fans had to find a new appreciation.  At least in my case, I never liked this whole part of the movie as a child.  It's the absolute lowest point for all of the characters; Han is frozen, C-3PO destroyed, Luke's defeat and revalation, Leia and Chewbacca losing Han, Lando's betrayal, Cloud city ultimately is captured by the Empire.  I even thought how much it must have sucked or all of the characters being separated as long as they where.  Think about it, in Star Wars they are all together for most of the film time that they know each other. In Empire Strikes Back, after Hoth they aren't all back together until after Han is unfrozen and they are escaping from Jabba the Hutt.  (if you read or are familiar with Shadows of the Empire, this is a long time span)   So anyway, this portion of the film, although it had a few well done action sequences, just never seemed right.  I kind of hated the whole look of Bespin which I guess is the point since the whole place is made to make us feel like a double-cross is about to happen.  It seems too "World's Fair" to me, and although it stands out as a positive for actually being a good call (one of the only) for George Lucas to fix it in the special edition by making it look more vibrant and bigger, it just never was a winner in my book.

That said, it did produce some interesting entries into the Kenner vintage figure line, but again, I never cared that much for this part of the movie so I only got around to getting all but three figures (Han, Lando, Cloud Car Pilot)  until this year to complete the set.  Re-enacting Bespin was never a priority of mine.   Shown above was another Bespin item I never had, the Cloud City Playset which was a four figure packed set with a plastic base, some peg holes and a cardboard background. I do like the little freezing chamber they have.  This set was rereleased under the Power of the Jedi collection completely revamped and retooled and looks like one of the cooler semi-modern playsets you can get. 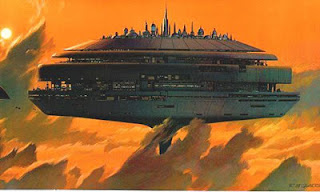 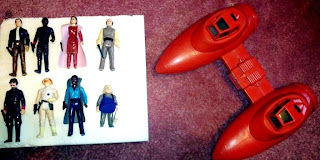 What we have is the compiled set of Bespin related figures (Boba Fett and Luke with Bespin Fatigues aren't included and I guess 3PO with removeable limbs counts but he'll be in my droids collection review)  We have Han Solo Bespin Outfit, Bespin Guard (black), Leia in Bespin Gown, Lobot, Bespin Guard (white), Cloud Car Pilot, Lando Calrissian, and Ugnaught.  Next to them is the only vehicle which came from Bespin, the Twin Pod Cloud Car.  All of these items were produced for the Empire Strikes Back line from Kenner in 1980. 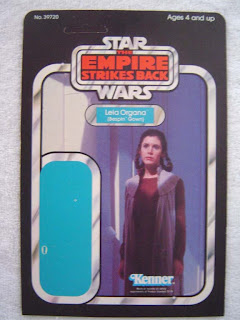 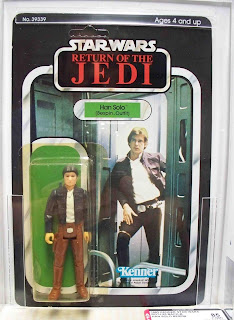 First up are Han and Leia, (they remind me of a bride and groom).  Han is actually a really well done rendition of Harrison Ford and besides small head original Solo, it's one of the only ones where they get it right.  He comes with a Bespin pistol which was released with almost every figure of the ESB line.  They change him up enough from his New Hope mold, making him more broad shouldered and better proportioned which worked well to match Ford's change in physique between the first and second film.  All I knew when I was younger was that his jacket was different.  I liked him and he was my default Han of choice to play with.

Leia...well....for toy makers it seems kinda hit or miss with Leia and this one is a miss, my version looks ridiculous.  Fortunately, this is really the only Leia figure in the vintage line that really misses on Leia's likeness.  Her face is so off kilter and her eyes so close together and her neck is massive.  In my eyes, she's just not a good figure. They tried to sculpt the dress into her legs and it looks like a metal workers apron.  They cape was the only nice feature with really good patterning, (which I do not have since the seller sold me a repro "Complete" which was just the crappy pink job seen below)  However, there are better produced variants of this Leia that do make her look more feminine as well as a "turtle necked" version of her however none make her look like Carrie Fisher. She gets the Standard Leia Blaster that she used once in the first scene of New Hope. (Set for Stun) 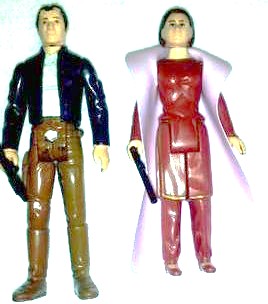 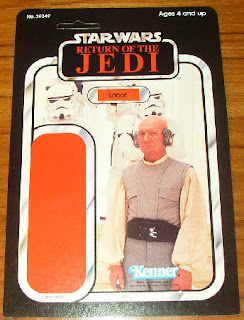 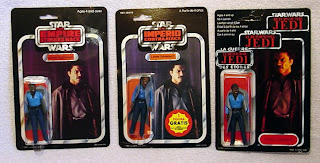 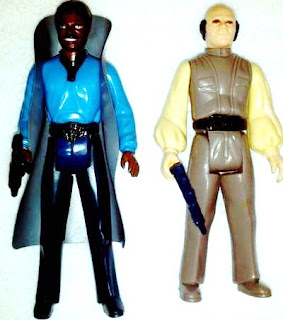 Here, we have Lando Calrissian and Lobot, the two main characters of Bespin.   Lando is the city's chief administrator and Lobot is his cyborg humanoid robot security leader. (I guess?)  I don't know, I guess they really wanted us to have some great times as children recreating Cloud City scenes so they felt it necessary to produce every single person you saw during this part of the movie.  Meanwhile we never got a Dr. Evazan, Grand Moff Tarkin, Imperial Officers in green (Piett, Needa, Ozzel, Motti), Sandtrooper, Cantina Band, Mon Mothma, and so on?  These by no means are bad figures.  They are well done molds who capture the feel of the characters nicely.

As for Lando, I think they made way too dark for Billy Dee Williams.  He got a nice vinyl cape and is well proportioned.  I say this because his POTF2 model is a disaster since they give him a bear hug pose, a 12 pack set of abs and a hard plastic cape that falls off.  The Kenner model also gets a standard Bespin Blaster.  They also have him in two variants, smiling and straight faced. He does smile a lot so I guess that was an okay call for Kenner.

Lobot is a very basic figure.  Another reveiwer on Youtube said he's the easiest figure to find in great like new condition since no kids ever played with him.  Honestly, what would you do with this figure who just walks around and has no dialogue.  Seriously, his big moment was opening his eyes when his head pods blink.  He has tight joints, a basic Bespin blaster and (not shown) has some decent paint detailing on the back of his head piece, which was a nice surprise when I got him compete for 1.99. haha. 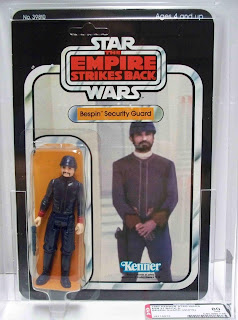 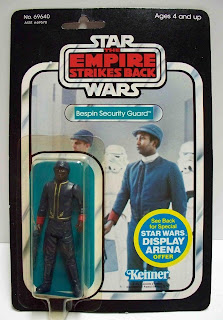 This pair of figures are the Bespin guards.  They come in both Caucasian and African American mode (I guess this would be African Besponian?)  Again, background characters that you would need to play a Bespin scene out.  They are actually really well made figures and aren't just repacks.  They both have completely distinct separate sculpts from head to toe, different stances and nice detailing.  Their faces are expressive although, again, the black guard is just way too dark even compared to the actor they based him off of.  Both come with Bespin blasters.
I never got them until this year but I like them a lot and they are figures you need as a pair.  The gold piping and leafing on their jackets are my favorite touch and I think it was a good call for kenner to not give them white turtlenecks as shown in their cardbacks.  Probably Kenner being cheap saving on white paint but still good call nonetheless. 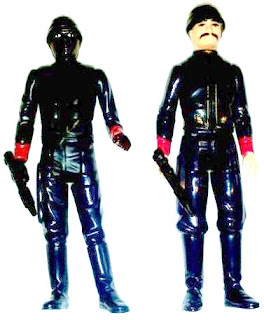 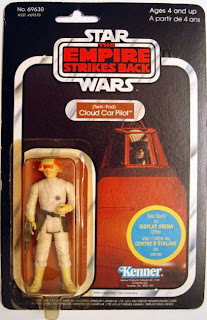 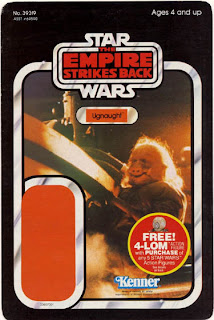 Lastly, we have the Cloud Car Pilot and the Ugnaught.  The Ugnaught's actually are a pretty necessary character since they freeze Han and try to melt down C-3PO, what little bastards for being in the film for about a minute.  They seem like the city's technichians.  The figure comes with a cloth tie around apron (variants are in blue and purple and apparently red although I've never seen that one) which is know to fray very easily and a small white tool case accessory which is a very expensive after market item to get and sellers know this since Ugnaught is probably a big last figure many collectors get around to getting to finish their collections off.  His sculpt is nice and has an apron molded into his body in case you lose the original and his head has good paint with white hair, tusks and little devil eyes on him.

The Cloud Car Pilot is possibly the most ridiculous figure ever made for the line.  Honestly, I don't even know where they dug up the production shot of him in the Cloud Car since you never saw him in the original film.  He even looks more like a Voltron character to me but is a neat item.  He's a all white figure so that means a lot of him you find will have some yellowing. (as mine does)   He came with a communicator in his left hand and blaster in his right.  He also got a different weapon, the TIE pilot blaster.  The guys at Kenner must have been laughing their asses off since his vehicle has two seats so kids would have to get two of this dude.  At least in the special edition, you see more of him if not for a split second. 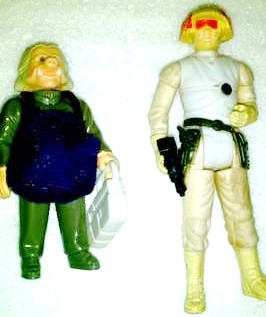 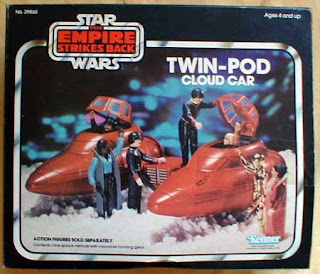 The last item from the Kenner toy line for Bespin was the only vehicle they produced for the line (they made a Bespin inspired mini-rig but I wouldn't say that counts)  This is the Twin-Pod Cloud car.  Nice box art depicts a pretty well done scene even though the figures are all standing on what looks like clouds.  This is a pretty simple vehicle, it had two standing legs under each pod to make it look like it was flying or hovering but they weren't made that strong and it tends to sloutch.  There is a faux computer screen on the inside and fits the pilots well, with a hinged plasti-glass canopy over head. It is a pretty loud shade of orange with 4 decals in total for the computers and the center engine portion.  It is nicely made to scale and serves its' purpose as the security vehicles for Bespin.  Again, barely seen in the original film but shown more extensively in the special editions in the background and when they are harassing/escorting the Millenium Falcon. 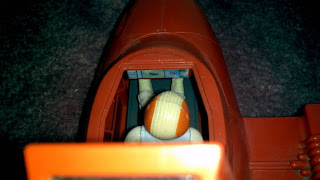 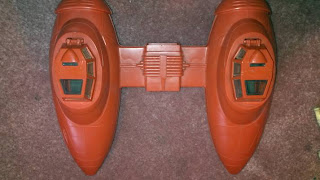 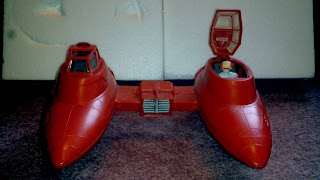 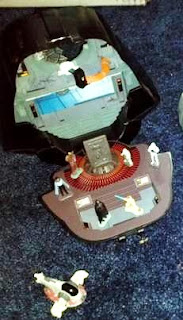 Shown below,  we have really the only cool playset or item produced for cloud city which I never had and the later Micro Machines set which mirrors it shown above.   It was the Micro Collection Bespin World.  Look at it, it came in three separate pieces you could buy on their own or as this final compelted set.  It was a diecast precursor to micro machines and God it looks so much better. Compare it to the Darth Vader Bespin head playset shown above which was creative but severely limited.  The old one has everything from the carbon chamber, the window Vader shoots Luke through, the duel scene, to the "I am your father" scene.  with a ton of well posed and detailed mini-figures!  I always loved the look of these playsets.  Hoth and the Death Star looked really cool and were jam packed with features and they even had Return of the Jedi sets in the works before Kenner pulled the plug on the Star Wars line.  Damn... 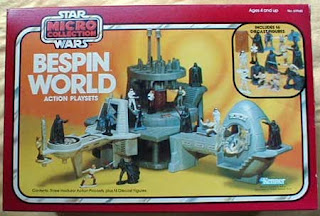