I have been putting this off for wayyyy to long but finally I’m putting my toy blog together. 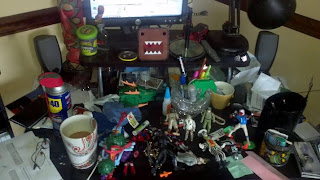 My desk on a good day


Since I could remember, action figures have been a mainstay of my life.  There are more memories than I can count to moments from my life bracketed in with a specific action figure like when I got my Peanut's Gang Pinball machine on my third birthday or the day I beat Contra on my NES and finding my bag of lost G1 transformers I got when I was 3 and having the time of my life or  finding a boxed speeder bike long after the Star Wars line was discontinued on the shelf at Wes Friedman’s Dept Store (and sadly losing it at my grandfather’s house later that week).  I remember how psyched I was when my uncle let me borrow his Kenner AT-ST to make my Star Wars Battle of Endor Movie with my dad after we got home from Easter Sunday dinner, the ozone and gunpowder smell of the caps from the Robocop Figure’s weapons, playing Lazertag, and my dad going to Hills with me on a day when I was home sick from school and getting me the GI JOE Thunderclap on sale for 12 bucks  while he bought Warren Moon and Bo Jackson's Starting lineup figures.  So many of my days had action figures running the show. 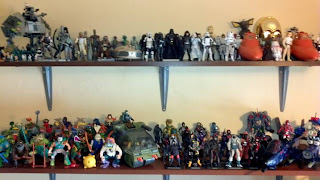 My collection in October 2011

Man, even different Easter Sunday memories have had so many great toy memories because it was always close to my birthday like getting a Shipwreck Island lego set in my basket or among some other things, A POTF Landspeeder.  I remember so many Christmas mornings, and yard sale finds, and the score of 50 classic star wars figures that I still  have today for 20 bucks at the Circle Drive in Flea Fair or (better yet) Buying a Cloud Car for 5 bucks and having a Weequay and Boba Fett included inside.  I remember what other kids got for their birthday’s like the GI Joe Avalanche and Condor, The Ninja Turtles Technodrome, the WWF wrestling Ring, or or toys from friends older brother's collections like Supernaturals, A D&D, Karate Kid or having a friend pull out two bins of Series 1,2 and 3 Gi Joe Vehicles and saying “take whatever you want.”  ( I took a H.I.S.S. Tank, a Cobra A.S.P. and a complete EEL's figure, not a bad haul) 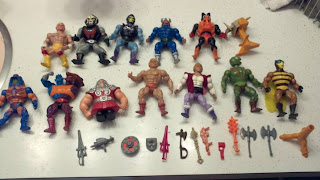 So many toys and figures I had all possessed stories behind them.   No matter where you went as a kid growing up in the 80’s, you were sure to find toys everywhere.   So many lines to choose from.  Highlights I specifically remember were not only the biggies like GI Joe, Transformers, Star Wars, Ninja Turtles and the like, but I remember so many others like the LJN Wrestlers,  Battle Beasts, Crash Test Dummies, Monster in my Pocket, Moblins, My Pet Monster, Masters of the Universe, Rock Lords, Go-Bots, My Little Pony, She-Ra, Supernaturals, Thundercats, Strawberry Shortcake, Biker Mice From Mars, Street Sharks, Exo-Squad, Smurfs, Sylvania Familes, Robotech, GEM, Rainbow Bright, Pee-Wee’s Playhouse, Care Bears, Silverhawks, Sky Commanders, Mad Scientist, Creepy Crawlers, Starting Lineup, M.U.S.C.L.E. men, Beetlejuice, Ghostbusters (both real and filmation) COPS, Robocop, MegaForce, Inhumanoids, Willow, Fisher Price Little People, Weebles, Micro Machines, Captain Power, MASK, Visionaries, Voltron, Food Fighters, Dick Tracy…These are just one’s I can remember that either I or kids I knew or relatives  had.   Don't forget the cavalcade of McDonald's promo toys or even the special finds in cereal boxes.  My favorite being the Wacky Wall Walker I got in my Corn Pops. 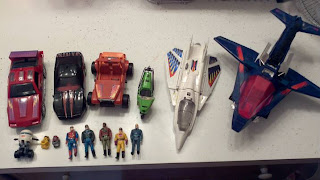 So, what is the point of this blog?  Pretty much to relive these memories, rekindle the memories and nostalgia among some of my readers and do some fairly comprehensive musings on some of these great toy lines.  Since I moved into a bigger living space with my wife, I finally scored what I never ever had.  A toy room!  So for the first time, I can display some of my favorite collectable pieces, expand on some of the lines I never had room for even as a kid and store the stuff I plan on selling.  I just popped my ebay cherry in August and have since sold multitudes of various toy and action figure lines, making much needed money for bills and to expand my growing collection.  It really has been an eye-opening experience to see not only what things cost and what great deals I could get but also what some people are willing to pay for things like a part off of a broken vehicle or a lunchbox or an antennae accessory!  All I can say is, buy things complete because buying stuff and “finding the parts later” will end up costing you dearly. 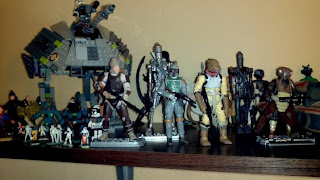 
Over time, I also plan to highlight some of my friend’s toy collections as well.  I really want to stoke the interests or rekindle the fires of how great some of these collections are.  I’ve read and heard so many times that “they’ll never make another one like this.” ahem...Terrordrome, U.S.S. Flagg, Snake Mountain, Death Star Playset (them again, if anyone hasn't seen the New Ninja Turtles Sewer Playset coming later this year, find that picture, it's mindblowing) The more I see, the more I believe that fact so I feel it’s up to collector’s to keep these remembrances alive to show how great this toy renaissance really was and still is.  I want to do some toy reviews of my weekly finds, do some comparisons between the old and new versions of figures and do a few feature pieces on some of the items I have had and since sold or just rehash some toy memories from growing up.  Anyway, That’s my intro post for this new direction my blog is going, I will probably still have a political or video game post every couple months but it’s just not doing it for me anymore.