I made a couple quality purchases this week that didn't require checking my mail, tirelessly browsing Ebay or having to access my Paypal account!  These last 2 weeks actually had me going to a Toys R Us and finding something worth buying twice!  Actually, there was a third time as I actually had a Fall of Cybertron Shockwave in my hand and I put it down...big regret there since that line seems like it's going to be rare as hell.  Additionally, I finally broke down and ordered two of my long overdue Star Wars Vintage Collection figures. (got them both for 20 bucks with shipping included...score!)   Very soon, a Luke in Hoth Gear and Wedge Antilles will be getting their 7 month late reviews!

But as for the two things I DID get, they were some nice ones.  I got what appeared to be the last set of Minimates Avengers that any local TRU seems to be carrying and the 2 pack was of Hawkeye and Black Widow, the two lesser popularly known members of the Avengers Initiative from the blockbuster summer film.  I also managed to find two of my favorite Ninjas, Leonardo and Donatello, from the quickly selling Nickelodeon Teenage Mutant Ninja Turtles line by Playmates.  They will get a bit more attention in this post as seeing an honest to God TMNT display with proper attention paid to it instantly rocketed me back to 1989 and it's been a long, long while since I was so excited to buy a toy. 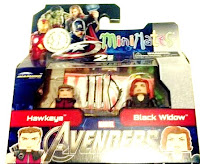 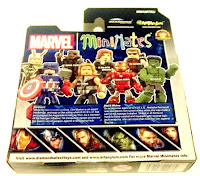 The Minimates were super cool.  The pair came packaged in a Toys R Us exclusive box with nice illustrations of the Avengers team on the peg flap and two Minimate illustrations of the individual characters on the bottom corners.  The flip side of the box has a nice shot of the entire Avengers Collection. (Wish I could find the Iron Man, Hulk, Captain and Thor sets) They were very well produced figures with super detailed costume art on their body parts with nice hair attachments.  Black Widow comes with a twin set of handguns and Hawkeye comes with 3 arrows and a bow.  Whats really cool about his weapons is that his arrows can fit in his quiver and the one he's holding has a slot to fit into his bow to make some nice poses.  He also comes with two interchangeable heads; one with goggles, one without.  My only gripe is that with most Minimates and it pertains to their ability to stand.  I wish they all either had bigger feet (a la the Sentinel) or got clear plastic stands (a la Ryu) since most of these will be sold to a collectors market.  Overall, nice purchase.  If  you like comics, get 'em.  If you like the Avengers, get 'em.  If you like toys, get 'em! 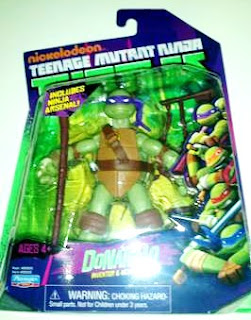 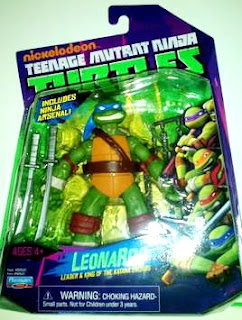 Ahhh... so nice to see Playmates has still got the touch!

They even have a nice little fold out "collection guide"...totally threw me back to the old Kenner Books you would get in a vehicles or playset!

Onto the star of the show today. That's right, my reboot Ninja Turtles! Thanks to Shezcrafti for posting that new theme song footage which I thought of the entire ride to TRU on Thursday. I already stopped at one location to find the shelves swept clean. I was pissed off but a little happy that these guys are getting an enthusiastic response. I saw that they had all four turtles, Splinter, April and Kraang. Kraang looks bad ass btw. April and Splinter don't thrill me. I didn't want to go hog wild so I paced myself and grabbed Leo and Don. Got em home, admired the packaging for a while and opened them up the next day. The packaging has nice artwork supporting the up and coming series with your rank and file stat card on the back and your "Collect em all" display of the series 1 Turtles figures. I tell you, this whole thing is just great. I'll say again, it had Birthday, Christmas morning, and trips to K-Mart with my mom memories pouring into my consciousness. (and really, it was just a great feeling to finally have a toy line available in stores to be psyched about again)

These figures are actually really well made.  They are finely detailed with little battle scars on their undersides and shells.  Their bodies are made of a softer plastic while their shells are hard. They have 11 points of articulation and have balljointed necks, shoulders, elbows, groins and knees. There are fine paint detailing on their leg, knew and elbow wraps as well as little gold touches on their buckles on their weapon harnesses which fit snugly into place.  Their weapon kits are beautifully sculpted with actually variance to their weapons instead of the same set each figure got on the Gen 1 Playmates figures.  (Don get a Naginata,  San Setsu Kon Nunchaku and two large disk shaped Shuriken...Leo gets three 8-pointed Shuriken's  pointed, a tang dagger, an additional katana and a set of 3 kunai knives.  I like how the weapon kits match the skill set of the specific turtle as well.

I love that they kept the original look of the faces on the turtles with the opaque white eyes following the original toys and the Laird/Eastman comics.  Never liked the pupils on the Toon Turtles...it just made them look goofy. (Wish they made red bandanna variants)  They are very stylized with big, sturdy feet (3 toes this time!) over large calves and forearms in a caricatured manner.  Their faces are badass but I did notice two griping points.  The first being that they are nowhere near as detailed or dark as their prototypes are on the leaked production photos. Also, I was under the impression that their weapons were going to be in color (detailed on the bo grip, the sword grips, the chain on Mikey's nunchucks, etc.) Here they are only solid plastic in their mold color.  All in all they are tiny gripes and the positives way outshine the negatives.  I like the variant in each turtles skin (although not nearly as dark as the classic G1 Turtles as you can see in the compare shot)  Also, you cannot remove their belts unlike their earlier versions. I never liked that about the old ones so that works for me.  Gone are the "L", "D", "M" and "R" buckles as well.  Again, works for me.  They are super textured with muscles flexed, grit on their hides and folds in their wrappings.  All in all, totally worth the buy and I cannot wait to get the other two and a Foot Soldier!
Posted by Mr. R at 8:42 PM