Just saw on KG's Vintage Collection page as per the source Flyguy.com's page, if you are looking to purchase the last wave of the soon to be "indefinitely discontinued" Vintage Collection figures (Weequay, Nien Numb, Lumat, Royal Guard, Prune Face...and a bunch of prequel b.s.)  you better get out your credit card and be ready to buy an entire wave all at once.  More after the jump.

That's right!  Hasbro, in their metaphorical giant middle finger to their adult customers, decided that all the figures you saw in their lineup for the final vintage waves will not be released to retailers!  You need to buy them all on-line only! Gotta make way for the sea of clone wars crap to stagnate the shelves for 2013. 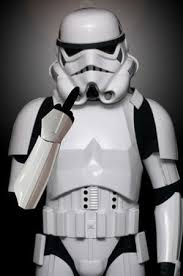 This on top of shilling us for the Target three packs with figures included we already have, your ridiculous SDCC "exclusive" set, and  K-Mart exclusives (which is just hilarious that K-Mart gets anything), you solidified my previously spoken sentiments that you truly do hate your fans!   Can't wait to shuck 20 bucks a figure to some piece of garbage scalper down the line!