What's that mean?  Well, any movie where Christmas kinda takes a back seat to the overall crisis, mayhem or plot that supersedes the setting.  Some of these more serious movies work it in all too well making it even more unsettling by having disturbing or distressing events overshadowing the otherwise supposed happy time we all should be feeling rather than cold, eerie and creeped out.
Other movies just work in having a nice Christmas scene in it and just resonate a Christmas'y feeling so I gravitate toward them to boost my Holiday morale.


10 - 12 Monkeys:  Believe it or not, this movie takes place during Christmas time.  This time and perspective bending film keeps you guessing on the truth of reality and takes you on a true Gilliam prescribed epic that constantly stops to look at the details all the way to the end.  Between the prospects of pulling out one's own teeth to stop radio transmissions and collecting samples in a pathogen soaked apocalyptic Philadelphia, you do get some nice Holiday decor in the John J Wanamaker building. :) 9 - The Ref: Hard to find on DVD anymore...this home for the holiday's hostage crisis gone to hell take on the Christmas movie is great... Denis Leary at his best and Kevin Spacey is absolutely wonderful in anything he's in.   Great one-liners, great interaction and a must for any Leary fan.

8 - The Good Life: Steve Berra's first (second if you count the low budget 7-teen sips) big cinematic endeavor as a director works well as a Christmas settinged piece around a skinny outcast (Mark Webber) with alopecia in a mid-western football town where that is the absolute only thing that matters. Chris Klein is such an incredible asshole in this movie who literally takes our protagonist's Christmas gift from his hands and smashes it on the pavement. Donal Logue (Grounded for Life...awesome show) is another great character that emulates your classic football town townie. Believe me, I know...central PA is full of them. Zooey Deschanel I pretty much think trademarked the god-awful "manic pixie dream girl" act in this film before she started ordering soup to be delivered in the rain, barefoot while she strums a ukulele and knits a scarf ironically. ugh. Christmas seems all the more colder though and the whole film is worth it for the gift scene (the lottery ticket part is great).

7- Batman Returns:  Christmas on a bad circus-induced halluconegenic trip.  Clowns with machine guns bursting out of presents (with a boing sound out of a cartoon), Fire-Breathing Harlequins burning teddy bears, candy cane missiles strapped to penguins...oh yeah and Batman's there too somewhere. 6 - Harry Potter and the Sorcerer's Stone:  I know it takes place over the events of a school year but the "Happy Christmas" scene always brings it home to me.  Maybe it was because I saw it on VHS when my roommate left it at my apt right around Christmas when I was sick in bed.  It just resonates Christmas to me especially when all of Harry's classmates are going home for the holiday's while he stays behind.  Sad but heartfelt. 5: Die Hard:  "Now I have a machine gun...ho-ho-ho"  Hell yeah...the anti-Rambo if you will...he certainly is a one-man-army but God this is the annex of the certainly destructible hero where we see every gunshot-glasscut-burn-scrape and wound by the end where Mr McClane can barley walk to the final fight and better yet, uses Christmas gift-wrap to conceal his final takedown pistol.  Bravo!
This is what happens when you get invited to a Christmas Party by mistake.  Plus this was my first exposure to Run-Dmc's take on a carol.  I could watch this movie any day of the week. 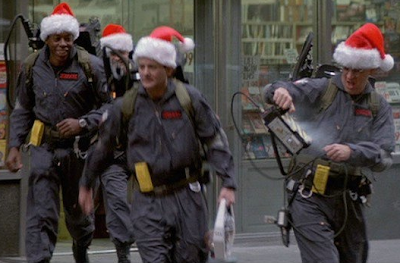 4 - Ghostbusters 2: Christmas never gets mentioned and I wonder how much time passes between the Ghostbusters rise to fame and New Years Eve at the end....I guess a month but that means the G-men really bust their asses getting the money to reopen the firehouse, get all their stuff back together and get a healthy customer base within a let's say 3 week period. This is loaded with Santa Hats, Christmas Trees and festive lights...oh yeah and Auld Lang Syne at the end so congrats Ghostubsters 2, you aren't nearly as good as the first (probably will be better than the 3rd) but you get to transcend into the ranks of Holiday Films. Nice one.

3. Mothman Prophecies:  Still gives me chills as my personal scariest movie of all time...not for jumps but for something that gets under your skin and stays ther long after the movie is over.   You will never look at tail-lights, christmas lights or christmas presents the same way again, number 37.

2. Gremlins:  What was advertised as a sweet, family, Christmas film turns into a hellish nightmare that was one of the two reasons why PG-13 exists to this day!  Everyone is great in this movie, not a character, line of dialogue or special effect is wasted and it is expertly paced.  Has horror, suspense, sci-fi, family, holiday and comedy elements all wrapped into one.  I always as a kid wanted to get out of school quickly when Christmas break was starting...to get home yes but also to get out of that building if any Gremlins were hiding in the science room...where we always got a random boring filmstrip to watch before break just like those kids in the movie did.

1. Kiss Kiss Bang Bang:  I don't entirely dig the whole Robert Downey Jr. as Iron Man thing...granted, he is perfect for the role but maybe it is just that he does Tony Stark a bit TOO well for my taste.  However this is RD Jr at his finest with Val Kilmer in one of the funniest roles around while Michelle Monaghan is possibly one of the most likable love-interests who nails emulating the whole package of what so many of guys longed for in high school with that one perfect girl who only could go so far as to tell them about her dates rather than go on one with them.  This movie is sharply written, has a great modern, noir, whodunnit feel and gives every guy that shot of being able to be the grown-up hero to the girl that got away wearing a Santa Hat as a cherry on top.