This Week's Assignment from the League: Patriotic pop culture. What movie, TV show, comic book, etc. makes you want to stand up and salute Old Glory?

A wide range of things pop into mind when considering patriotism and pop-culture considering a ton of our culture was pin-pointedly designed to inspire patriotism.  Look into things like the Creel Committee, the WPA, the American Imperialist League, the VFW, Boy Scouts of America,  hell, even Extreme Makeover Home Edition. ..all of them were convieved solely to create a totally patriotic environment conducive to producing a well-rounded citizenry.  (My thesis was on the ebb and flow of war-time propaganda, can't you tell?)   As a (typically critical) history teacher, I often am a skeptical bastard when it comes to buying into propaganda spewed forth from any government to keep its bewildered herds of mouth-breathers in line... however, I am not made of stone and I do take breaks for things like Memorial Day, Labor Day and the Fourth to watch "Gettysburg" and have a hot dog.   I absolutely love militaria and reading about strategy and geopolitics. Quite honestly, when I read about CIA sponsored anti-Soviet mind-control, Napalm and the H-Bomb, the adult in me shudders with disgust but the perpetual adolescent in me is thinking, "heh heh...cool."

That said, it would only make sense that the first thing I thought of regarding pop culture and the American way with a touch of jaded futility was Snake Plissken...no wait, wrong week.  That's right. Solid Snake!  They look alike, sue me.  That's right, our very own one-man army who takes down Walking Nuclear Battle Tanks like he's eating some corn flakes.  Snake is just an epitomizing powerhouse of total American bad-assery.  He is a lone wolf, chicks dig him, weapons expert, master survivalist, enemies respect him, his dad is named Big Boss for Christ's sake!   Name any other person who goes alone into enemy territory with nothing but a pack of smokes by their side?  Also, he rocks a cardboard box like nobody's business.  The whole time he's just a battle-hardened moody prick who doesn't even like the side he fights for but gets the job done just the same.  Now THAT is American for you!


He's voiced by David Hayter, possibly providing the best voice-over to any character ever besides the talents of Frank Welker.  The music in the series is dramatic as hell and seems only fitting of the most dramatic Tom Clancy adaptation all the while making you sense the urgency and think to yourself, "I have to stop these terrorists!!!"  In fact, why hasn't Metal Gear been made into a movie?  I mean, they made "Broken Arrow" but we don't get graced with a C.G. "Metal Gear: Rex" in 3-D??? Granted,  the games themselves want to be movies and a non-Kojima film could only fail...Imagine Michael Bay's Metal Gear...oi.   (It would be about Joseph Snake, [played by Channing Tatum...he's popular now] an ex-cop, racecar driver (tons of racing scenes ineffectual to the plot) who is fighting against business executives of Metal Gear Industries with their private, faceless, black armor clad army of some people...or something to that effect)


Anyway, Snake's pretty much the American James Bond as he fights a veritable rouges' gallery of terrorists be it FoxHound or his father taking on Cobra Unit, has the tech helper of Moneypenny in Otacon.  Colonel Campbell reminds me a ton of Colonel Trautman from Rambo as well.  Come to think of it, Snake has the Rambo thing down pat....holy hell, Snake essentially is Bond, Rambo, John McClane and Commando all wrapped into one.  His original design from the NES cart was noneother than Kyle Reese of Terminator fame and his face in MGSolid was modeled after Christopher Walken from the Deer Hunter...You see??? Take any awesome hero from your upbringing and Solid Snake is simply a stone's throw away.  The Kevin Bacon of ass kickers, if you will. As for instilling patriotism and making you feel like your saving America, The Metal Gear series does all of this pretty well too, I mean Raiden doesn't come close to Solid but he does take on Solidus right under Old Glory at Wall Street.  Between Big Boss and Solid Snake, they save Alaska, stop an all out Nuclear War numerous times,  win the Distinguished Service Cross, take on an evil twin (and wins),  rescue the girl (or Otacon) and look great in tactical camo.  His cynicism only makes him more of a realistic, strong yet flawed character...which is parallel in what it means to be a real American hero. 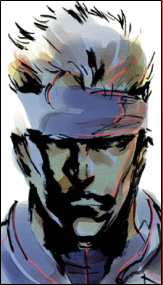 Speaking of Snakes...Branded in the 80's is talking about Cooooobraaaaa!

Shezcrafti said what we were all thinking.

Ivan Drago don't have shit on Flashlights are something to eat!